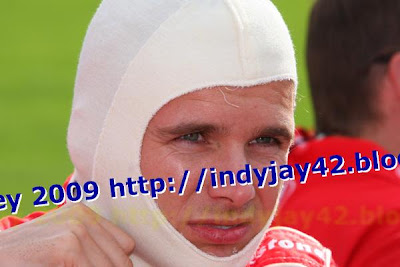 By all accounts, the two-day Indycar test that ended yesterday at Barber Motorsports Park near Birmingham, Alabama was a huge success with several thousand fans paying their way in to watch. Let the lobbying begin folks! Racing here in 2010 seems like it might happen, although the track probably needs some work to create some passing areas. It can't be any worse than Belle Isle! Dixon topped the charts the first day and Power was quick on Day 2 so it's the usual suspects on top heading to St. Pete next weekend. And don't forget Master Rahal who was strong in the test and would love to duplicate his race winning run of a year ago in his very first IRL event! Everyone ran faster the second day and it was disappointing to see Dan Wheldon so far down the charts. He was very entertaining on Wind Tunnel with Dave Despain Sunday night (no surprise there) and he was quite convincing about his desire to bring Panther Racing back to its glory days when my man Sam Hornish was ripping up the league. Maybe they will fare better in FLA. 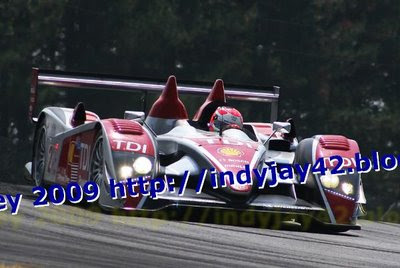 The ALMS had their annual 12 hour blast at Sebring this past Saturday and I'm concerned about the car count. The almighty Audi's ruled the roost once again but they didn't have much competition in LMP1 and the LMP2 class appears to have lost just about everyone! Since Acura is in LMP1 now and Penske took his Porsche power to Grand Am, the ALMS series as a whole could be suffering this year, since the fields would be made up primarily of GT sports cars which are nice but not nearly as sexy as the big prototypes. Maybe everyone is playing it close to the vest until LeMans in June but I don't think so. Don't tell me - I know: "It's the economy, stupid!" But that doesn't make it OK and who knows what the series will look like by the time I get to see them at Mid Ohio with the IRL in August. I wonder if the pursuit of technology and the reliance on manufacturer support has burnt the teams in ALMS. It's beginning to look like the Rolex Grand Am series may have the right formula. I've said it before and I'll repeat myself today: these guys need to merge worse than the IRL and Champ Car did! Why not now! IMSA did a great job with equivalency formulas back in the 80's so I'm sure it could be done now without too much wrangling. 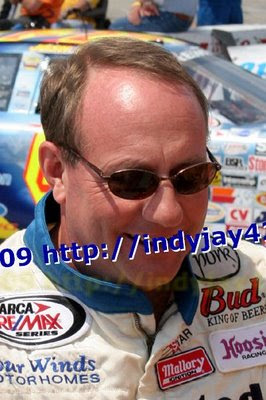 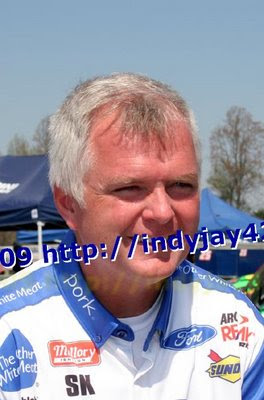 Meanwhile back at the ranch, Kenny Schrader has entered a car for the Salem ARCA show which runs April 5th. His biggest challenge will be Frank Kimmel who practically owns this track, and I'm curious to see what kind of young talent Eddie Sharp Racing will bring to these famous high banks. Three rookies for ESR looks like a lot to handle and there could be some mangled sheet metal (as usual) by the time the 200-lapper is done. Even the ARCA bunch is having car count troubles, since when I checked this weekend, there were only about 25 cars entered and several of those had driver "tba" listed, which usually translates to lack of funds. A shorter field for Salem isn't necessarily a bad thing, however, since the ARCA race usually has 6 or 8 guys that are clearly just field fillers and pull in the pits after a handful of laps with "handling" problems, aka, "I can't drive with the big boys and I just came for the starting points and appearance money so I could get out of the house for the weekend." Just kidding!
See you at Salem!
Posted by Jay Alley at 8:59 PM No comments:

With the IRL season opener on the streets of St. Petersburg Florida now less than three weeks away, the teams will head to Barber Motorsports Park f

or a test session to fine tune their road course packages. Ryan Hunter Reay has been confirmed for the test in addition to the 21 or so other car-driver combinations that ran the Homestead test. Too bad Rahal Letterman won't be there... 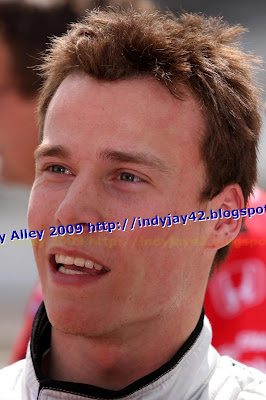 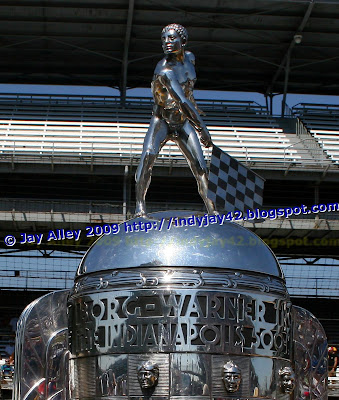 famous trophy in racing. Looks like Raphael Matos will campaign for The Luczo Dragon team of Jay Penske so it is nice to see a couple of Indy Lights guys make their way to the top series. The TV coverage on Versus is heating up as well since the remaining Saturdays in March will continue to feature one hour programs devoted to the IRL. I'll have to get my DVD recorder fired up since the St. Pete opener is the same day I will be shooting the ARCA stock cars at Salem's high banks. I'd rather be in FLA but them's the breaks - I'm saving for Texas in June! That will be enough of a treat and a chance to go to a track I've never been to before.

For now, I'm wondering what the heck NASCAR and Lowe's Motor Speedway are thinking about. Nature Boy Rick Flair as honorary anything at a Cup race makes the naysayers happy, I'll bet. The series already catches enough flack for being "scripted" like wrestling - can you say "competition yellow"? Now they bring in a washed up old wrestler to help sell tickets. Are you serious?

Then I'm wondering what USAC has up their sleeve with a new Gold Crown series with front engine tube frame cars that will test next year and run on ovals and road courses in 2011. Methinks the test is just to see if anyone will buy the equipment. Remember the "new" Silver Crown car? It all sounds vaguely familiar. That went over real well, now didn't it? Don't get me wrong - I love USAC racing and the short track action in the midwest is second to none. You can keep your wings but give me the slideways midgets and sprints any day. And the Silver Crown cars on dirt one-miles like the Indiana State Fairgounds or DuQuoin in Illinois are a sight to behold. But Gold Crown on pavement? Ovals and road courses? That I will have to see. Should be some interesting photo ops.

Finally, I'm wondering why I signed up for Facebook, as if I don't have enough web stuff to manage. First it was Flickr, then this blog, then picasa, now Facebook and soon enough a page on ning.com so I can link with American Motor Journal readers. What the heck. Two years ago this time of year, I didn't even have a job after being laid off at the start of the housing crisis. That's all behind me now and employment sure beats the alternative. I can't exactly do the races in the style to which I would like to become accustomed, but at least I can go and capture some great memories in megapixels. I don't even really care if no one reads this blog but the creative outlet is priceless and has saved my sanity many times the last couple of years. Thank goodness I have an assistant to accompany me at some of the races! See you there.


Here's my links for the week:

Indy Countdown Continues with Versus 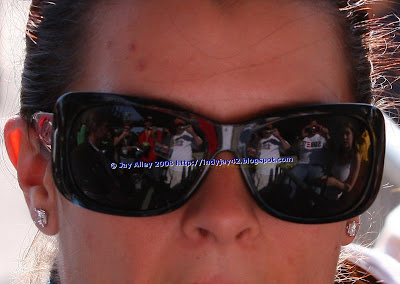 61 days until the Speedway opens and Versus hits the air this weekend with the opening salvo of its Indy Racing League coverage with a special focusing on Danica and her impact on the IRL. Lots of folks have been bashing the IRL for it's television package for the 2009 season but I say wait and see. It will be hard to top Speed TV's wall to wall Cup coverage but then that's the IRL battle in a nutshell, isn't it?
I'd be happy with any extra coverage Versus provides, especially if the start of every race is shown, uninterrupted or delayed by golf or some other garbage the bigger networks always seem to think is more important. Staying past the checkers for interviews will also be a nice change, as what the IRL really needs in my opinion is for people to see their people. Cup drivers have become so damn politically correct these days, I know what they are going to say before they even open their mouths - "... the crew and the guys in the shop are really working hard and the Bazooka Joe COT just needs a little more work blah blah blah..."
Let's see some pushing and shoving in pit lane, and an ill-advised adjective now and then from the IRL brigade and let some emotion in. For crying out loud, these folks risk their lives at over 200 mph inches apart every race so who can blame them for being fired up when they get out of the car after someone has given them a hip check into the fence and out of a race?
* * * * *
Say it ain't so Helio! The tax evasion lawsuit continues to draw coverage of Helio which must be driving him crazy. With apologies to Shoeless Joe Jackson of Black Sox infamy, I can't help but think of that phrase whenever Helio is mentioned lately. Other than Danica, he is arguably the biggest reason the IRL has gotten national media attention outside of the racing world the last couple of years with his "Dancing With The Stars" win. I never once watched the show but I followed the media reports as he advanced since I knew every soundbite or drop of ink would benefit Indycar racing. In the last interview I saw with him, he talked about being in an element where he was not in control and it was clearly bothering him. He seemed pressed to flash his usual effusive smile and I can imagine he is seeing his career circle the drain in fear that the charges could hold up. For a two-time Indy 500 winner, it just doesn't seem right. On the other hand, the defense that his lawyers are putting forth, that he didn't really have any managing control over the company that got the funds for his driving, seems kind of flimsy. It's hard to fathom this could be his downfall, especially when you see the crap that others have pulled and seemingly gotten away with. I'd rather have an alleged tax evader racing me than an admitted heroin user.
But I'm not in charge. I'm just a Hoosier with an opinion. More to follow you can bet. See y'all!
Posted by Jay Alley at 10:02 PM No comments: