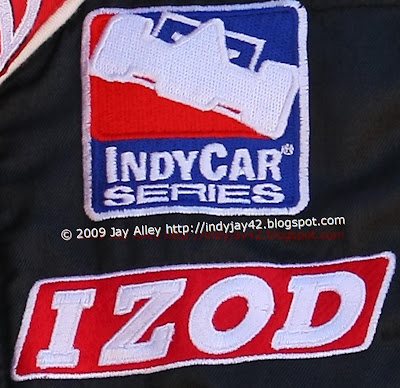 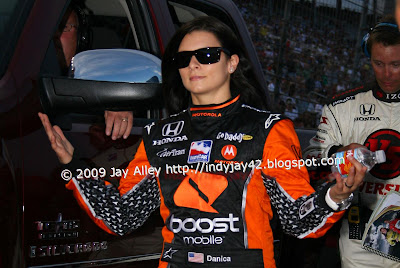 Even though the Indy Racing League season has been over for a month, the IRL continues to make news with the announcement that IZOD will become the series sponsor in 2010. Perhaps more importantly, Danica Patrick also has announced that she will run a limited schedule in the NASCAR Nationwide Series in 2010 for Dale Earnhardt's JR Motorsports team. Already IZOD coming on board has touted a new apparel line it will feature in 2010 of legendary Indy winners and their cars. All reports so far are that the IZOD brass are extremely happy to be involved and although the individual teams may not get direct cash infusions from IZOD's involvement, having their retail clout behind IndyCars should benefit everyone from a marketing visibility standpoint.

Danica's move to NASCAR has been much discussed this season, and feared by many to be a death knell for the IRL. I do not believe that will be the case at all. As the saying goes, a rising tide raises all boats, and the combination of IZOD's backing and Danica's stock car excursion should do just that. If it is true that she will not run NASCAR during the time period between the start of the IRL season and the 2010 Indy 500, that still leaves 18 Nationwide dates she could possibly make. If she gets to test this winter for JR and feels she is ready for Daytona, then imagine the boost that will give both series. A month before the IRL opens in Brazil, the series' biggest star and arguably only household name will be all over the motorsports media. What would "Go Daddy" do with that? And how many times do you think Michael Andretti will be interviewed about her during the month of February? That can only be good as everyone is going to want to see how this pint sized racing dynamo will handle the big heavy stock cars, absent the IRL's huge tires and mega-downforce. I wouldn't want to be the first NASCAR guy to put her in the fence as there might be some fisticuffs! Even if she doesn't run Daytona, there's still Fontana and Vegas races before the IRL season starts that she could run to just get seat time and get acclimated. Lord knows she will need the laps. I hope someone like Tony Stewart can give her some tips and I hope that Jr. is able to put a team behind her that gives her a real chance to win some races.

Looking down the road after the Indy 500, Danica could be racing somewhere almost every weekend through the end of November in 2010 if her contracts are set up right. And you can bet her presence will be a huge boost for Nationwide's ticket sales, race attendance and television ratings. She has always been kind on equipment and rarely had a major incident in the IRL, and I'm sure that would be the same in NASCAR unless someone gives her the bump and run. You just know it is going to happen and she is going to have to learn to handle a loose race car as the stockers seem to run best that way - quite a contrast to IndyCars which are essentially nailed to the track with downforce and are more likely to push than go loose. If loose is fast in a Nationwide car, then she better learn quickly. After Indy, she could run a lot of great tracks but the one I would be most excited about would be the road course at Montreal at the end of August. I'm sure she could more than hold her own there. With the IRL season wrapping up October 2, 2010, she would then have six Nationwdie races to run without schedule conflicts and she could really focus on stock cars, as well as probably make her Sprint Cup Series debut. That could make things really interesting in 2011 if she intends to be ready for the Daytona 500.

And what if she wins the Indy 500 in 2010? How can Andretti protect his investment in Danica beyond the new three year deal he has with her? I don't have the answers, but there's going to be more money coming to the IRL in the next few years as many fans are sick of NASCAR's WWE tendencies, phantom debris yellow flags, and the artificial chase points championship setup. The most recent Talladega race was a good example: I never thought they could put on a boring race there, but somehow they managed. Let them race!

Regardless of what happens, Danica is sure to have an impact on both IndyCars and NASCAR in 2010 and IZOD could be just the heavyweight marketing partner the IRL has been looking for. Next year, you won't be able to talk about one series without mentioning the other where Danica is concerned, and I think that along should bring a lot of female race fans to the IRL tracks. The IZOD people see IndyCars as sexy so you can bet your VISA card they will play that to the hilt in 2010.

I can't wait to get started, but I'd still like to see Danica run the Salem high banks!