This past weekend I was happy to get back on the road with the ARCA Racing Series after being away since Talladega in early May. It was great to see everyone again and the teasing started right away at the hotel Friday night when people started asking "who's the new guy?" But I played along and that became the running joke through the weekend. I love going to Iowa Speedway and apparently so does Sheldon Creed as he swept the pole and the race for  MDM Motorsports Saturday in the Fans With Benefits 150. Creed drives for the team with the most impressive record this season. That trend continued at Iowa with Creed getting his third win this season and MDM drivers taking three of the top four finishes as Chase Purdy took third and Zane Smith placed fourth. Youngster Chandler Smith continued his great short track runs with a second place finish for Venturini Motorsports. It's no surprise that Creed, Zane Smith and Purdy occupy the top three spots in the season standings with 12 races in the books. I've enjoyed watching MDM come into ARCA the last few years and "dabble" in the series by entering a few races here and there and doing quite well. Their results this year have been all the more impressive because of the enlarged scope of their participation and increased commitment to a multi-car entry at every race. That bodes well for the team in terms of season awards with eight races to go in 2018.

The 7/8ths mile Iowa bullring bills itself as the "Fastest Short Track On The Planet" and the racing here is typically quick and frantic. The 150 laps went by in a hurry with only a few on track incidents so the race really came down to track position and managing tires. Riley Herbst is third in season points so far but did not have a good race at Iowa. Another thing I love about Iowa is the variable banking which allows drivers to use multiple different lines and creates opportunities for lots of two wide and three wide racing.

The Iowa race weekend is the only time all season that ARCA and Indycar share the same venue which I dearly love. I wish I could have stayed for the Indycar race on Sunday but I had to get back to Indianapolis since I had professional development for teachers at our school set to begin on Monday. Now if I had a paying client for the Indycar race, I probably would have stayed but for once I chose not to banzai a late drive home and start off exhausted for the work week on my regular job. It was a good decision and I still got home in time to watch the Indycar race on television. As it was, I only got about five hours of sleep after finishing editing my ARCA photos at the track Saturday night and was glad to get home.

Everyone knows I'm a numbers guy - after all, I am a math teacher - so here goes! This was my fourth ARCA race at Iowa and this weekend had the best weather by far of any of them. Usually the Iowa race feels like working in a furnace but temperatures were only in the 80's so it really felt quite comfortable. We started race day with a 7:00 a.m. officials meeting before the teams started loading in at 8:00 and I didn't get back to our hotel until about 11:30 local time, so Saturday was nearly a 17 hour day. I did three full laps around the perimeter of the track while walking to photo locations during practice and the race and logged 18,042 steps for the day. While that was not a personal record for step count, I was definitely feeling it on the drive home Sunday once the adrenaline and Excedrin from race day had worn off. I ended up driving 953 miles from Friday to Sunday but my Civic Si was more than up to the task and I averaged over 34 miles per gallon.

In addition to the weather being Chamber of Commerce perfect all weekend, the lighting all day Saturday was just beautiful. My habit during practice for an ARCA event is to go outside the track and shoot the cars going through the corners or coming straight at me. That view is one the teams like since the shots will show the attitude of the cars entering and rolling through the turns. For night races, I am always hopeful of getting a nice sunset shot during the race to show off a more artistic side of the event, and the sun sure cooperated this race. We got some fantastic golden light in the middle third of the race and I was joyfully going from spot to spot on the outside of Turn 3 to shoot down the backstretch while the low angle sunlight lit up the interior of every race car that came toward me. From the other end of the track I got a few sunset shots and then headed inside for the last third of the race to shoot the front stretch and pit stops. I tend to follow a "10 laps and move" strategy to get a variety of angles during a race and sometimes every move I make works out just right. Last Saturday was one of those nights and at the end of the Victory Lane celebrations I knew I was where I belonged as I had had a fantastic day shooting. 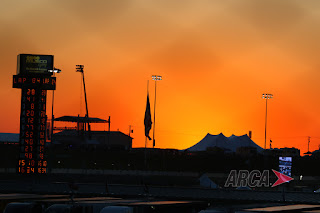 I don't really believe in coincidence anymore and I had an experience on the road Friday which was clearly just meant to be. After being on the road for less than an hour Friday morning, I hit a spot in a construction zone on I-74 where traffic came to a complete stop. As drivers in front of me started getting out of their cars to see what was going on I shut my car completely off and just sat there for about 30 minutes. Eventually I saw people snaking their way between big rigs to turn around and go over to the eastbound lanes of I-74 so I joined that caravan and was able to create my own detour. Apparently a wide load rig had gotten itself stuck on the bridge they were working on where both directions of traffic share the road but thankfully I was close enough to the front of the traffic jam that I could use the construction lanes to get out of there. As I backtracked over to US 136, I was happy to be rolling again and as I went through Waynetown, Indiana, I saw an old cemetery by the road as I entered town. Since I am working on a photo project called "Hoosier Cemeteries" (hashtag #HoosierCemeteries or on Facebook), I had to stop and take some pictures and I am so glad I did as the graves there went back to the 1820's. I made a note to return here again as there were Civil War veterans, veterans of the War of 1812, and a man who was in the Lewis and Clark expedition! I didn't know anything about that cemetery before the trip so this was a bonus find and well worth the inconvenience of a driving detour.

On the way home Sunday morning, I kept the windows open and enjoyed the flat, farmland scenery rolling by in Iowa and Illinois and since there was very little traffic it was an enjoyable drive. On long drives like this one, there's always lots of time to watch the world go by and I started noticing some airplanes in Illinois doing acrobatic loops and turns over farm fields along the way. As I got closer, I realized that those little planes were crop dusters, something I don't remember seeing very often in fields in Indiana. It looked like those pilots were having a lot of fun but I had no illusions about wanting to do anything like that myself:  drive a race car, yes, but not fly little airplanes like those daredevils. Compared to most of my ARCA friends, I had an easy weekend as the series was grinding through Week 8 of 11 straight weeks with a race. I will miss the next ARCA race at Elko, Minnesota this weekend but I'll rejoin the series at Berlin Raceway in Marne, Michigan the following weekend and then work six of the final seven races of the season.