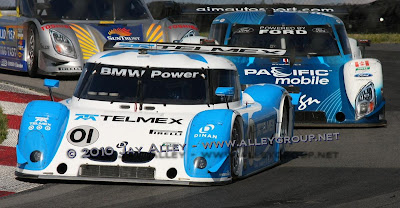 There are days as a racing photographer on the road when things just don't go your way and new challenges present themselves. Take this weekend at Mid Ohio for instance. My assistant and I hit the road race day around 8 in the morning and started out on the scenic route. We ran into traffic on the two-lane Indiana State Road 67, avoiding a brake check from some hillbilly who I had been trying to pass for miles. The we encountered road construction and an unexpected detour. When we got to the track we discovered there was a mix up on our event credentials and our names were not on the media list somehow. We talked to several people and got bounced back and forth between the media, Grand Am and Mid Ohio office personnel to no avail. Everyone was very nice and we were trying to figure out a "Plan B" when a nice fellow named "Jim" from the Mid Ohio staff was gracious enough to at least provide us with a cold pass so we could get into the paddock area, and we didn't have to buy tickets to get in.

That meant no access to the media tower, pit lane during the race or the trackside shooting locations where a "hot" pass was required. So we got parked and went down for the open pit lane walk and paddock looking for driver shots. We spent the race looking for places to shoot where there were holes in the safety fencing to shoot through, or gaps in the fence to get clear shots. It was frustrating and not what we were accustomed to, but we tried to make the best of it during the 2 hr 45 min main event with the Rolex series. Challenges often come up unexpectedly shooting a race. Batteries crap out. It rains. Someone gets in your way. But one thing I always try to do is bring home pictures. Last year at the Kentucky IRL race, for instance, I was not granted pit access during the race itself but I could go everywhere else. When it got down to the finish, I had to stand on someone's golf cart behind the pit lane fencing to get a clear view of the start-finish line but I still got shots of the photo finish. Mid Ohio is a bit different since it is a road race and not an oval track, and there are lots of different areas around the circuit that present possible shooting spots. The track itself is a beautiful layout with hills and mature trees as backgrounds. If you've never been there, I highly recommend it and the Rolex weekend is usually far less crowded than the Indy Car-American LeMans Series weekend in August will be. Come prepared to walk a few miles and bring rain gear just in case...

It was hot and humid so we just took the minimum gear we would need and went searching for driver pictures and interesting stuff during the prerace festivities. The Rolex series has some of the most beautiful race cars - the prototypes are wide and low to the ground while the GT class, dominated this year by Mazda RX9's, are brightly colored and just screamers of race machines. Of course we had to get the obligatory pix of ourselves on the scene like we always do and then we headed back to the keyhole to get ready for the start of the race. One of the great things about shooting a road race is you can go where the lighting is best. With the late afternoon start tailored for television, the keyhole is perfectly lit for the seeing inside the cockpits as the drivers wheel through that corner so it was a great vantage point to begin the race shooting. The bad news was the holes we could shoot through were few and far between without getting fence in the images so we kept walking and worked our way back to the esses for the second half of the race. It was an interesting and challenging day all the way around and I can't wait to go back in August. At least this time it didn't rain, although that was the one challenge I actually had anticipated facing and was looking forward to!

By the way: the Ganassi Telmex machine piloted by Scott Pruett and Memo Rojas took first place overall in the Daytona Protoype class and looked pretty much untouchable with Pruett behind the wheel. The race was filled with full course yellows and so it was a stop and start affair throughout. Joey Hand and Bill Auberlen stayed out front in their gorgeous blue and yellow Turner Motorsports Bimmer most of the race in the GT class and took BMW's first win in the Rolex Series since 2005. 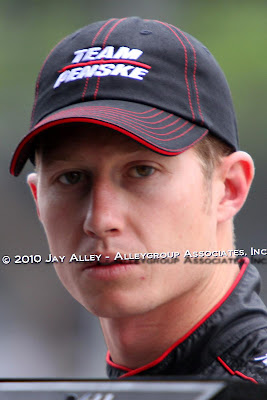 What a difference a week makes for Penske Racing's Ryan Briscoe. As you can guess from this picture during practice at Indianapolis, things weren't going well, then he crashed out of the 500 and probably couldn't wait for the month of May to be over. Now six days later, he takes pole position at Texas Motor Speedway and leads the most laps to get a win and perhaps turn his season around. His Penske teammates didn't fare so well at Texas, as Helio got taken out by Mario Moraes and Will Power had a variety of problems. Briscoe got past a suddenly competitive Danica Patrick late in the race to capture the win. Danica is another driver who couldn't wait to get out of Indy, along with the rest of her Andretti Autosport teammates. Marco Andretti followed up his string Indy finish with another good run at Texas and Tony Kanaan was his usual self on the high banks as he prepares for his first crack at Eldora this week in Tony Stewart's "Prelude To A Dream" late model dirt event. Ryan Hunter-Reay's Indy tangle with Mike Conway has been repeated a million times on television and become a YouTube staple this week but pit problems at Texas spoiled his day in what could be his last race for the season. A year ago this weekend, I was in Texas with my brother and his son shooting the race but unfortunately could not make it this year. The Texas oval has been renowned for close racing and photo finishes but last year was the race where that all disappeared for the IRL and they realized that aero changes were needed for the oval tracks. Since then, the IZOD Indycar Series oval races have been nail biters with edge of your seat passing and dueling. When they go to Iowa in two weeks, I would expect more of the same, although I will be at Mid Ohio shooting the Rolex Grand Am series event. Congratulations to Briscoe and kudos to Andretti Autosport for getting its act together.

With May in the rear view mirror, the heat of summer racing season is now fully in swing. Even with the abbreviated schedule at IMS, there was plenty to do and my vantage point for race day in Turn 3 turned out to be incredible with lots of side by side racing and Mike Conway's amazing accident on the last lap. I was very fortunate to get pictures of the incident as it was behind me and I first heard the contact and then turned and started shooting. This is one reason why I never listen to a scanner or a radio during a race: I need to hear the cars and sounds of the event, since anything unusual means something bad is typically happening and I have to be ready. Whenever I tell people about the Indy 500, I tell them it is a total sensory experience, and the feeling of the race and sounds of the competition are just as important as the visual element for this photographer. Here is part of my sequence from Conway's crash: 11 frames with my Canon 7D means this took just less than 1.5 seconds. A blink of the eye with very little margin for error. Conway and Hunter-Reay are both extremely lucky to be alive and I am grateful that these images are spectacular without involving any driver being seriously injured.

The other part of my Indy 500 weekend that I have not written about yet was the annual "Night Before The 500" event at O'Reilly Raceway Park in Clermont a few short miles west of the Speedway. The USAC National Midget Series ran a 50 lap feature and the show had the F2000 and Star Mazda series as support races. The midget feature was won by Tanner Swanson over Bryan Clauson in a heated battle that was punctuated by an early red flag for a scary three car incident where Daniel Bedford got launched out of the park on the backstretch. Luckily he was not injured but the event settled down from there and Swanson was a surprise winner. The F2000 event began the racing for the evening but the real star of the night turned out to be Conor Daly, son of former F1 and Indy 500 driver and current television racing analyst Derek Daly. Conor led every lap of the 125 Star Mazda event which was stopped a couple of laps early to get the midget race underway. When Conor got to Victory Lane, it seemed like he brought half the City of Noblesville out of the stands with him to celebrate. Conor looks like the real deal and was never seriously challenged in the Star Mazda event. It's clear he is going places in racing and has won three Star Mazda races already this on the "Road to Indy". This slide show is a mix of F2000, Star Mazda and USAC Midget action from that night.

You never know where you're going to find me with my cameras, and you know I'll have something to say. By the way - my Indy 500 Rookie of the Year pick Simona de Silvestro was extremely lucky at Texas last night. What took the safety crews so long to get fire retardant on her car? The IRL better look at that and make sure they are ready to go for Iowa. While I can't make the trek to Rusty Wallace's nice little oval, I'll have sports car action from beautiful Mid Ohio to bring you before you know it.