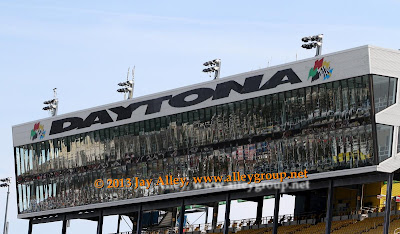 My third annual road trip to the Daytona 500 is just nine days away now, and I've come to my senses for handling the travel this year: I'll fly instead of driving solo!. There's 30 hours of my life I can do something else with! And my brother is meeting me down there for part of the weekend so it should be fun. Last year was a mess with the one and only postponement (ever) of the 500 due to rain so I missed the Sprint Cup race and all that driving seemed to be for naught. Flying down this time via Airtran will seem like I've gone to heaven in comparison to the last two years.

I will be shooting for Associated Press again this year and will arrive in time to work the Camping World Truck Series race next Friday night and stay through Monday so I can shoot the Nationwide race Saturday and the Spring Cup 500 on Sunday. I toyed with the idea of going down sooner to shoot the qualifying races, but the logistics would have meant missing too much work, which would not have been good. I will still get a healthy shot of racing fuel exhaust to get my racing season started. My first 500 saw Trevor Bayne come from nowhere to win so it will be exciting to see what this year's race will bring, especially with the new generation body styles that everyone is calling the "Gen 6" cars. Bump drafting may be a thing of the past (finally) but from the testing that occurred in January, it looks like pack racing will still be the order of the day.

Everyone will be chasing 2012 Sprint Cup Champion Brad Keselowski as the new season gets underway down by the beach. All the teams get a new lease on life and initial practice this weekend will tell a lot about who has outright speed but not necessarily who has race speed. That will come in Saturday night's shootout and then in the duels next Thursday when the starting field is set. Another season like 2012 will be hard to match for Keselwoski but there is no questioning his desire or ability to repeat as champion this year. He will have a host of challengers, not the least of which will be bridesmaid Carl Edwards. The season will not be without its share of controversy as drama inside and outside the race cars will most certainly unfold.

And it's already happening, as Juan Pablo Montoya comes back to track where he recently won the Rolex 24 Hours of Daytona, and where he crashed into a jet dryer in a bizarre accident at last year's rain delayed 500. He should be full of confidence and if sheer car control is a deciding factor, he can't be overlooked. Of course I am a Tony Stewart fan so I'd like to see him get a 500 pelt for his career to be nicely rounded out; then maybe he can take Roger Penske up on his offer and come back home to win the Indianapolis 500 to cap it off.

Further down pit lane, a new kind of Danica-mania has already begun as she's filed for divorce and supposedly hooked up with Ricky Stenhouse Jr. Despite the fact that her NASCAR race results don't merit the hype she always gets, you can bet there will be plenty of discussion about her love life over the next few weeks. What's next? A reality show? Really? Let's race and let the standings speak for themselves. In any event, I will get pictures as that's what I am supposed to do, but I sure hope the story is told with race action and not soap opera chatter.

So until they hit the track this weekend, not much more needs to be said as I have had to wait for the season to get underway from Indy and wait out the winter like everyone else. Once the race action starts heating up, watch for more here and there, and follow me on Twitter @alleygroup. See you at the track.