And so it begins: a race photographer's heaven full of events starts this weekend with a road trip to Salem Speedway to work the ARCA race for the series. The weather forecast isn't great for either Saturday or Sunday but ARCA knows how to get an event in so I am pretty sure the 200 lapper scheduled for Sunday afternoon will get run sometime before I have to be back on my teaching job Monday morning. Those old Salem highbanks drain fast and the track workers know how to get it dried off. There have been numerous times where it didn't look like racing was possible there but it happened despite my prediction, so I am going to stay out of the weatherman business and just go with the flow. I will have pictures to make regardless.

This Salem weekend begins a stretch of racing unlike anything I have ever experienced before. Next Wednesday May 3rd is Fernando Alonso's test on the big oval at Indianapolis Motors Speedway (IMS) so my plan is to get out there for a couple of hours in the morning to get some photos for Vision Sport Agency. Then Thursday night May 4th I hit the road for Talladega as soon as I get out of work, which usually means I get there about midnight Indy time. Friday is ARCA's day on track at Dega so I will be there shooting for the series as we practice, qualify and race all on Friday. Then Saturday and Sunday I will stay over and shoot the NASCAR races for Associated Press, which should be interesting since Dale Earnhardt, Jr. announced this week that he intends to retire from NASCAR at the end of this season. The Alabama fans absolutely love Junior so I will be trying to get some candid shots of him at one of his best racetracks. Then I drive home Sunday night to be back at the head of my class Monday morning.

The following Friday May 12th action picks up on the road course at IMS for the Indycar Grand Prix event which includes support races for the Indy Lights series. I will be there both days for VSA and hoping that Simon Pagenaud or Sebastian Bourdais can snag a win as those pictures would go over well in Europe for VSA. I will be a one man gang for VSA at Indy this May so I will probably end up setting some steps records by the time the month is over. After the Grand Prix May 13th, I get Sunday off but I will probably still be doing some editing as the track time far outweighs the editing time for the road course event. The rest of that week I will be teaching all day and trying to zip out to IMS for Happy Hour any day the weather permits for Indy 500 practice and more photos of Alonso and all the rest of the Indycar regulars who will be getting ready for the 101st running of the 500. I will also keep an eye on Takuma Sato for Autosport Japan magazine which has used quite a few of my Indy 500 photos of Taku in its publication the last few years. Keeping up with international and domestic relationships has become a major goal of my photography work in motorsports. I am grateful for every opportunity.

Saturday and Sunday May 20 and 21st are qualifying days for the 500 so I will be working at IMS both days. Then it's race week and after teaching Monday through Thursday I will be at IMS for Carburetion Day Friday May 26th, covering the final practice session for the 33 qualified cars, plus the Freedom 100 Indy Lights race and the pit stop competition. I have always considered race weekend my birthday weekend since my birthday is May 31st, so we will be celebrating my 60th the day after Carb Day. Then 300,000 or so people will join the celebration the next day at IMS for the 500 on May 28th. So between now and the 500, I will have one day off where I am not teaching or working a race event. And I couldn't be happier about that.

Then life calms down for a few days as we wrap up our school year and make final preparations for my biggest travel adventure ever. We leave 10 days after the 500 for Paris, France and the 85th 24 Hours of Le Mans. My fiance and I are going together and while I am unsure what kind of access I will have for the 24 Hours race, you know I will bring back pictures. That's what I do.

This past weekend was the second race weekend of my 2017 season and it was a study in contrasts compared to my initial photo assignment for this year back in January at the Rolex 24 Hours of Daytona. Thousands of laps were run by IMSA's WeatherTech sports car series competitors across four classes on the Daytona road course and it rained buckets throughout the night. By comparison, my Nashville weekend involved an aging half-mile banked oval where the ARCA Series ran the Music City 200 lap under the watchful eye of MavTV personnel and a live television audience. I had perfect weather from Friday through Sunday so driving to and from Nashville from Indianapolis was a piece of cake and race day Saturday was quite pleasant. The sports car race had a battle for the lead right to the end and the longest caution period came during the night when rains peaked between 5:30 and 7:00 Sunday morning. At Nashville, the lead was held by the #78 of Kyle Weatherman most of the night but tire strategy handed the win to Chad Finney after the completion of 95 laps under caution. They were even crashing after taking the checkered flag!

Perhaps it's not fair to contrast my IMSA and ARCA series weekends but as a photographer, they have a lot more in common than you might think. For instance, Saturday at Nashville stretched from 7:30 in the morning at the ARCA officials meeting to well past midnight once my editing was completed. That's about a 17 hour work day whereas Daytona is a few hours longer. A big similarity was my approach: I had photo goals for both events in order to keep my personal challenges elevated and stay sharp creatively. I did not meet all of my goals at either race event so I know I still have more to work on. I will get the chance with ARCA again in three weeks when the series goes back to Salem Speedway in southern Indiana for its spring visit. I will have to wait until June to hone my chops on 24 hour sports car racing again when we go to Le Mans.

Another contrast involves travel. In January, I flew to Orlando and then drove to Daytona. For Nashville, as I will for all of my scheduled ARCA races this season, I drove solo in my 2015 Honda Civic. I cracked the 32,000 mile mark on way back from Nashville, which seems like a lot given I only got the car in September of 2015. I truly love to drive and it's nice to find someone to run with on a long trip, like the white Grand Am south of Lousiville on Friday. Hearing the wind and the singing noise that my Continental Tires make on the highway when I'm at speed is a love song I look forward to hearing every road trip.

This was my third trip to Nashville's Fairgrounds Speedway for an ARCA race and it is an interesting old facility, located on the State Fairgrounds property south of downtown Nashville. Some people may think the ARCA race was being held at the Nashville Superspeedway; while it is true that ARCA has raced there in the past, that track is pushing up daisies now after going through bankruptcy. Daytona's road course is huge compared to the little Nashville bull ring which is only a half mile long.

One of the common themes for race weekends nowadays is the friends I see at the racetracks, and it doesn't matter what series I am covering or which track I visit. Invariably I see people I've known for years as a photographer. More and more, however, I am renewing friendships with drivers, crew members, team owners, PR people and many more, as I return to familiar tracks. Or I am meeting people in person, some for the first time, with whom I've connected on social media. Sometimes the word "family" gets used in this context, but to me it's more like a community of like minded souls who love motorsports in all its forms. That is really a cool thing to be a part of and I have been very fortunate to experience that in many different settings.

And then there's the surprises, like the young woman I met on pit lane during ARCA qualifying on Saturday afternoon. I noticed she was wearing an Excalibur Pit School shirt so I asked her how she was doing and whether she was on a crew. She very excitedly told me her name, Brehanna Daniels, that she was a former Division I basketball player at Norfolk State University, and that she was going to be the first African-American female pit crew member in NASCAR! My first thought was, oh to be that young again! I will be keeping tabs on this young lady and I hope she makes it, as ARCA is a great training ground for crew members, crew chiefs, team support personnel  and others - not just for stock car drivers.

And then there's the fans. While many people don't know much about ARCA, there's also people like Rowdy Maglite who has an internet radio show and covers the series extensively. Or the shirtless guy in Victory Circle after the the Music City 200 was over and was yelling "Hell yeah!" as loud as he could towards the winning team members for some reason! Whatever your flavor, you can find it in racing and the attraction is strong as half the starting field in the Nashville race was making their first season start - and some were making their first ARCA start ever. So ARCA really is the place to go if you want to see tomorrow's stock car stars today. Plus, you can do it for a whole lot less money than a Cup race. If you don't believe me then come out to Salem Speedway April 29th and 30th, camp out at the track and watch the action all weekend. It will be ARCA's 101st time race at Salem so the history is there; you should be too. See you then! In the meantime, here's a few of the photos from my Nashville gallery and a link to the full gallery. 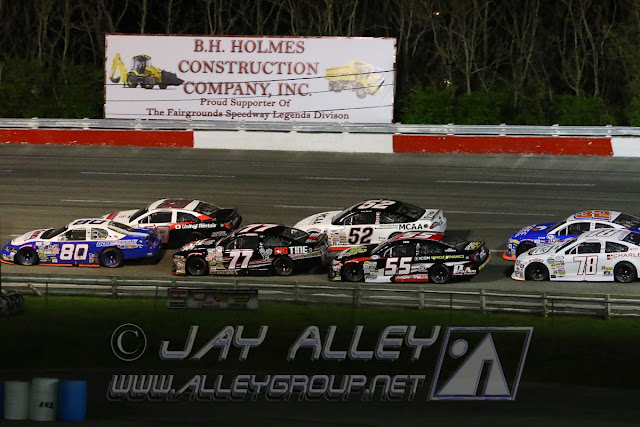 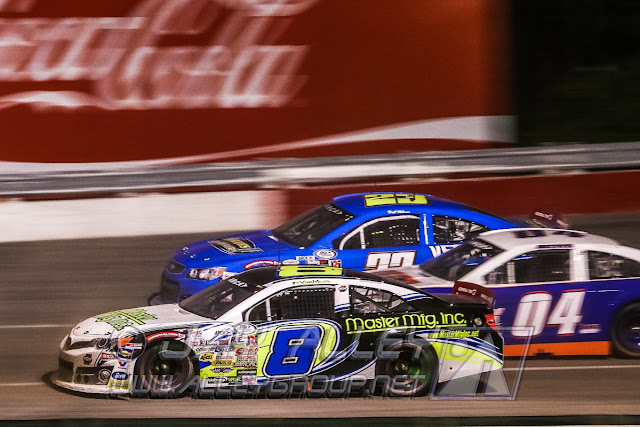