Paul Newman: A Racer's Racer - May He Rest In Peace 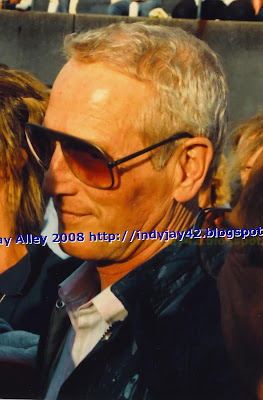 The racing and entertainment worlds have lost a giant of a man: Paul Newman. We will miss him at Indy and on the big screen. God rest his soul and bless his family in their loss.
My connection with PLN is minimal - I'm just a Hoosier and a lowly photog. But I have had the chance to be near this legend in the pit lane at Indy on many occasions, to shoot him racing in the Trans Am series at Detroit and elsewhere back in the 80's, and my greatest memory is not from the racetrack at all, but from the movie theater.
I was about to turn 12 when the movie "Winning" came out just before Memorial Day weekend in 1969. I remember my dad asking if I wanted to go see it, and then getting a discount ticket for the last time as a person less than 12 years of age. Watching the movie itself I was completely spellbound, and it remains one of the great racing movies of all time, along with "LeMans" (Steve McQueen) and "Grant Prix" (Jim Garner). It will always rank above the others IMO since it was about the Indianapolis 500.Frank Capua. Lou Erding. In-car camera views for the first time. Swatches of several Indy 500's montaged into the film. The first lap wreck in 1966. The Speedway motel where the infamous affair occurred that added to the personal drama for Newman's character that mythical month of May. And so much more than just the story of a racer.
For me that pretty well sums up his life. Lived on a grand scale, but always humble. You were lucky if you got a shot of him without his sunglasses on and I never saw him sign an autograph, but he was never rude or uppity when someone asked - he would just say, "Sorry, I don't sign autographs." I don't think he believed in his own celebrity and his charitable work is second to none, so the kids who benefited from his salsa's and salad dressings don't know how lucky they have had it to be the beneficiaries of this great man. I have some of his back bean and corn salsa in the fridge right now as a matter of fact...
PLN. Indy wasn't the same without you after the IRL-CART split and it won't be the same now without you in the future. I'm so glad you had the chance to grace us with your presence again this year for one last lap at the Speedway. If only your drivers had won Indy during your lifetime. So close but yet so far - Mario and Nigel among the best ever. Just like you. I miss you already.
The pic above is from Indy in 1986 at the pole draw as is the one which follows where he is being greeted by Roger Penske (in red shirt). And I had to include one from Detroit in 1984 in the Bob Sharp Racing Nissan. God bless and thanks for the memories. 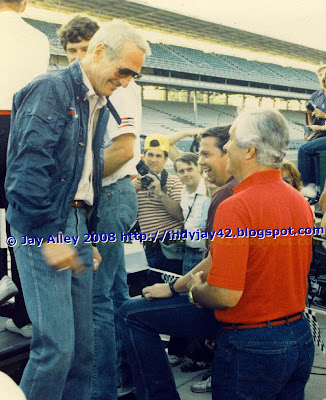 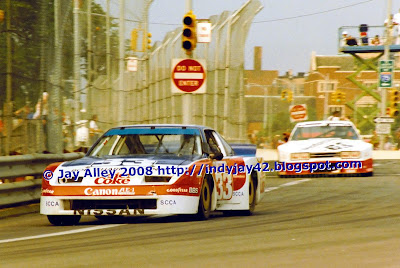