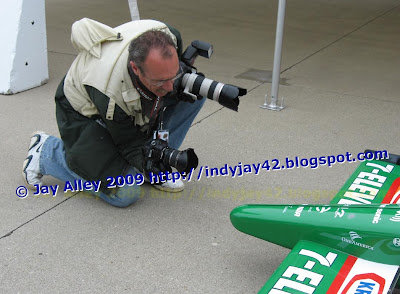 You can probably tell from my hairline in this picture that I'm an oldtimer. Well, now it's official. One of the things I have been working towards since I first started shooting the Indy 500 in 1984 was membership in the "Indy 500 Oldtimers" club. This past Friday, I got my membership card and approval letter in the mail so it has finally happened. I am so excited and consider myself blessed that I've been able to get accepted, especially considering some of the difficult times I've endured at the Speedway and away from the track over the last dozen years or so. I can't wait to start wearing my red hat this May and am grateful that I've been able to hang around long enough and participate in the greatest race in the world as more than just a spectator. You can tell from the following May 2008 picture how happy I am when I'm at IMS. 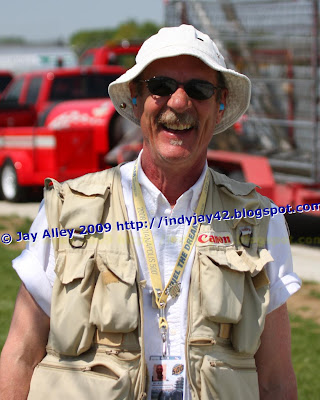 I've said it many times before: a bad day at the racetrack beats a lot of good days lots of other places. And I've had more than my share of bad days at the Brickyard. Thankfully, those have not been held against me and I've been able to learn the lessons I needed to overcome them. It only happened with the assistance of a lot of people since I first started.

At the risk of leaving out someone (and I apologize already if I do), I'd like to thank Keith Pritchard, Annie Miller Carr and Carl Pendleton for agreeing to sponsor my Oldtimers application and for the wealth of advice they've given me over the years. Thanks also to Don Hamilton at American Motor Journal for the chance to have freedom at the track to be more than just a turn shooter waiting for a spin. Thanks to Ron McQueeney, Steve Snoddy, Ron Green and many others at IMS for the opportunities and help they have provided. Thanks to Alex Person for giving me that tryout and first opportunity with UPI. Thanks to Jerry Clark, Gregg Griffo and numerous others at the Indianapolis Star. Thanks to AFP for enabling me to get back in the game in 1999. And most of all, thanks to the other photographers like my friends Jamie Gallagher, Glenn Smith and a host of others for sharing the passion that makes us endure the wild and unpredictable month of May that is the Indianapolis 500.