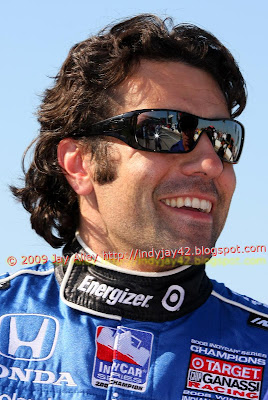 Before I say anything about the Camping World truck race, I have got to give the Target team kudos for the way they have seamlessly integrated Dario Franchitti into the team with Scottie D. And Dario sure seems like a happy camper every time I've seen him, either at Indy or here at Texas Motor Speedway. So far it has been a safe weekend at the track and tonight will be the acid test with 24 cars ready to roll off around 8:30 local time. This track boasts more than its share of the closest finishes in Indycar history, and tonight could be another one as Briscoe and Helio are close on the heels of the Target bunch. I was surprised that Helio didn't make a stronger run for pole since Briscoe was out very early and I saw the two of them talking quite a bit before Helio went out next-to-last in the qualifying order. But the day belonged to Dario and I look forward to a great show under the lights tonight. 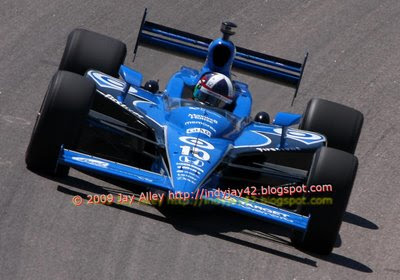 My day yesterday was a very long one. Up at 5, to the airport in Indy, straight from DFW to the hotel then the racetrack by 12:30 Dallas time, then Indycar practice and qualifying and the truck race. I finished editing about 1 this morning local time and after walking several miles to scope the facility out and good shooting locations, this dog was tired when my head finally hit the pillow last night. Today has been a little more laid back and we don't need to go back to the track until around 4:30 or so this afternoon. I hope to catch some z's by the pool in a little bit and be ready to go tonight.

I met some really nice people in the infield between Turns 1 and 2 before the truck race last night. They had an old school bus and I was told the owner of the bus had been reserving that same spot against the infield fence ever since the speedway opened sveral years ago. I also got my first taste of shark meat as they had some grilled up from a catch a couple of the guys in the group had made awhile back off the Louisiana coast. They showed me pix of a mako shark they had caught and were nice enough to invite me up on the bus for the first 40 laps or so of the truck race. I traded them some 8x10's from Indy that I brought with me and enjoyed talking about racing and their experiences here as they were from the Grapevine, Texas area and were most hospitable. A special thanks to those folks for their time. It didn't turn out to be a very good place to shoot the race since the infield catch fencing got in the way as the trucks ran the low line through that end of the track. Experiences like that affirm for me the basic goodness in people and especially in race fans as it doesn't matter where I have traveled, the common bond is racing and enjoying the events with camaraderie, good food, and whatever choice of spirits you may happen to favor. The Dr. Pepper went down nicely with the shark meat as it was bloody hot yesterday for this hoosier, and today it is supposed to be Even hotter. No wonder they run these June races at night!

The hotel here is just awesome and we can see the race track from our room window. The track is really huge and very nicely laid out for a mile-and-a-half circuit. I had another nice experience in the media center yesterday as another photographer that I have known for quite awhile told me about someone who was interested in shots from the truck event, and I followed up with them before IRL qualifying to see what I could do to help. That was a nice surprise and it was good to know that he felt he could trust me with the opportunity. Thanks Steve!

Back with more later tonight and then tomorrow it's back to Indy. I'm going with Dario to win tonight as he looks awfully tough to beat right now with the work the Target team has done on ovals outside of the 500. We'll see and perhaps I'll get that great shot that everyone hopes to capture. That's why I keep coming back - not to mention the fact that I can't get enough of the smell of ethanol exhaust and tire smoke from pit stops. Later!