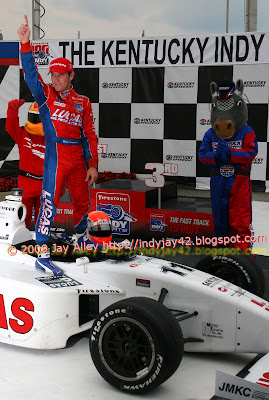 Sam Schmidt Motorsports driver Wade Cunningham took the checkers today after a spirited battle among the top 4 for the full race distance. A late spin caused the race to finish under yellow and Carlos Saavedra and Ana Beatriz followed Wade to the line in second & third. Problems with drainage yesterday caused the postponement of all of Friday's activities and then a rain shower around noon today caused the schedule to get jumbled even further. Both the Lights and IRL cars got on the track for later afternoon practices and the Lights race was pushed to 6 p.m. but they got it in. More rain is forecast for tonight so the featured IRL race could still be in jeopardy.

I'm in the media center writing this now so I hope to have a further update before I leave the track tonight. Someone just came in and said it is raining. I drove through rain near Madison on the Kentucky side of the river on my way here this morning so nothing would surprise the reigenmeister, although this year my luck has been pretty good so far. I hope Versus will stay with the race tonight, although my recorder is set for the slated time, so we'll see what happens.
Posted by Jay Alley at 7:32 PM