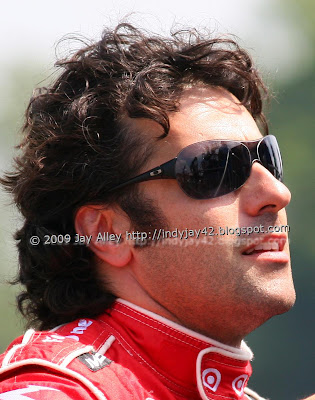 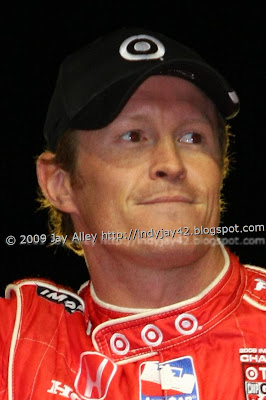 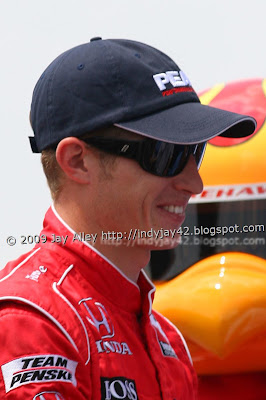 It's hard to believe that the 2009 Indycar season is about to be over with the finale tomorrow at Miami Homestead. Oh how I would love to be there! But Versus will have to be my surrogate for tonight's preview and qualifying shows, plus the race tomorrow. It should be one helluva show with the series title down to three men and 8 points of separation between them. With a 10 point margin between first and second place race points, it is still possible that Dixon could win by finishing second if he gets pole position and leads the most laps. He also has the tie-breaker over Briscoe based on season wins. Dario is in the catbird seat and he and Dixon have been down this road before when they duked it out at Chicagoland in that season's last race.
I have to root for Dario as my sentimental favorite, having come back so strong from a one year "vacation" in NASCAR. If Briscoe doesn't get a grip on his excitement level tomorrow, then look for him to make another mistake like he did in Japan when he had the race won and blew it coming out of the pits. Dixon is as cool as they come so I don't see him having any problems staying up front, so my guess is it will be the Target boys battling for the honors with fuel and pit strategy possibly taking the day. So Dario, please let Dixon lead will ya! Ride around in his draft and let Dixie break the air for once, rather than the other way around. If Dixon is allowed to just cruise around in second or third most of the race, he has shown the ability numerous times to go farther on a tank of fuel than anyone else, so he probably gets the race win and season championship. After all is said and done, I will come back with my favorite moments of the season - and there have been a bunch of them. Including Indy, I was fortunate to shoot five IRL races for American Motor Journal this year and I had a blast at every one of them.
While the IRL teams have taken a bit of a breather in the schedule recently, there is much related news worth noting. Dixon ran for de Ferran's ALMS team at Petite LeMans and spun off into the barriers on a damp track - not good form Scottie! Speaking of racers named Scott - how about Scott Sharp's crash at Road Atlanta! OMG is he a lucky man. Those Acura's sure are tough! Several teams tested at Indianapolis and at Miami in the weeks leading up to this race and Vitor Meira got back into Foyt's car for the first seat time since his back-breaking wreck in the Indy 500 this year. AJ gave him a vote of confidence for 2010 and assured him the ride is still his and Vitor was quickly up to speed in the test. Sarah Fisher will be in pink livery for Breast Cancer Awareness this weekend and has announced a busier schedule for herself in 2010 (nine races) and a second car in four races for Jay Howard, who got the boot at Indy this year from another team after not looking very confident. He was awfully fast in Indy Lights a couple of years ago so of course I have to hope anyone who shares my name will do well.
The biggest off-track news is the continuing saga of Danica Patrick. Reports are she has signed a new three year deal with AGR but her "people" have not confirmed it. Meanwhile, JR Motorsports is supposedly trying to set up a partial schedule for her in their Nationwide car for next season when there are no IRL conflicts. Personally, I'd love to see her go to Salem in an ARCA car! Wouldn't that be a hoot? They'd have fans stacked on top of one another down there, and I'm sure the guy we saw last month in the parking lot who told us "he growed up there" would be in attendance along with all his cousins. That would be something to see, but it probably won't happen.
I'll be watching karts at Mark Dismore's New Castle, Indiana track on Sunday so I'm glad the IRL runs tomorrow. I'll get to see a good friend of mine race; he was crazy enough to let me do some laps in it there back in April and since I still haven't scared myself yet, I guess I will keep going back. Anyway, that's about enough for now, so see y'all soon! Go to a racetrack near you this weekend.
Posted by Jay Alley at 3:21 PM