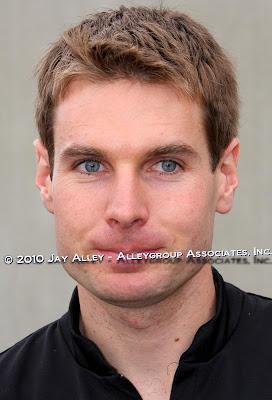 A late mistake by teammate Ryan Briscoe opened the door for an improbable comeback win by Aussie Will Power in Sao Paolo, Brazil today in the inaugural street course race in Brazil's largest city. The anticipated Penske-Ganassi team duel never materialized, even though Dario Franchitti led a number of laps early on. Instead, the IRL storylines involved three drivers on the podium who missed most of the 2009 season due to crash injuries or financing woes.
Will Power was close to tears in his post race interview as he talked about his doubts he would be able to come back and be fast after his horrific accident last fall at Sonoma. He made a classic inside pass under braking with a handful of laps to go to relegate another comeback kid, Ryan Hunter-Reay to second place. IZOD got its money's worth today as Hunter-Reay was the class of the field most of the race but he lamented a lack of straight line speed after finishing second to the charging Power. Hunter-Reay jumped in and out of rides last season and struggled mightily with Vision Racing at Indy last year, only to see himself now becoming the face of IZOD in Indycars with Andretti Autosports. Brazilian Vitor Meira took third in front of his home crowd after missing most of last season with severe back injuries suffered in the 2009 Indy 500. Always a fan favorite, Vitor is one of the nicest guys on the circuit and his homage after the race to AJ Foyt Racing for keeping the seat warm for him until this year was very touching.
It was a very interesting weekend in Brazil with track surface problems caused by slippery concrete postponing qualifying to race morning and a deluge complete with hailstones swamping the race track during the race at about half distance. The day started with a scary first corner incident involving multiple cars, with drivers flying blind through the concrete dust and Mario Moraes ending up on top on Marco Andretti. Alex Tagliani and the new Fazzt race team were most impressive until he got punted by Dan Wheldon and ran into innocent bystander Tony Kanann spoiling his race. Go Daddy girl Danica Patrick had a spin in the rain and finished a lap down while the newest lady on the circuit, Simona di Silvestro, was quite impressive, leading laps in her first ever Indycar start. Of the newcomers, Brazilian Ana Beatriz showed that she belonged in this series with a smart rave to finish on the lead lap, ahead of all the other rookies and the more celebrated female drivers.
The biggest surprise for me was the botched strategy of the Target Ganassi team who kept Dario and Scott Dixon out on wet weather tires too long and once the track got dry, they were too far back to challenge for the podium. Dario was charging at the beginning and might have won had it not been for the team's tire strategy. Dixon got caught up int he first corner incident that was trigger by my darkhorse candidate Takuma Sato, so Dixie had a long fight to get back into the Top 10 as it was.
While I am sure that the Brazilian crowd would have been happier with Helio or TK winning this event, the track was very racy and mostly devoid of the point & squirt style of driving that seems to typify most street circuits. There were bonafide passing zones, high speeds on the long straightaways and not much bouncing off the concrete or other drivers once the concrete dust had settled from the first corner incident. Now the Indycar brigade packs up for the St. Petersburg Grand Prix in two weeks where former winner Graham Rahal will rejoin the fray, this time driving for Sarah Fisher Racing. I look forward to the next chapter in all these comeback stories. See you at the track!
Oh BTW. Is it May yet?
Posted by Jay Alley at 4:24 PM