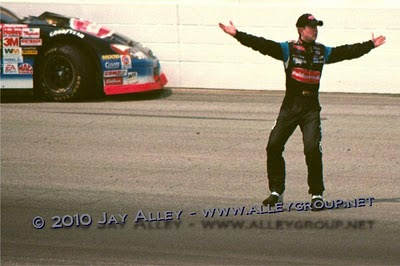 There's an old saying in racing that there are drivers who have hit the wall and drivers who are going to hit the wall. No one is immune from crashing, and this past weekend's Indycar race in Toronto say the wrecking in almost epidemic proportions, from Helio Castroneves running over Vitor Meira to Ryan Hunter-Reay's hip-check of Scott Dixon. Usually we expect the bottom half of the field to find concrete but lately in the Indycars, it seems to be just about everyone. Even the Tour de France seems to have been infected with crash-itis as lots of riders have gone done in all sorts of circumstances - even Lance Armstrong hit the pavement, and not just once, but three times in one stage. So now NASCAR comes to Indy for the Brickyard 400 and short track events at O'Reilly Raceway Park. What sort of weekend can we expect with this wrecking influenza sweeping up racers left and right?
More of the same would be my guess. From the post race fallout after Toronto, someone will probably have to knock Will Power out of the way as he will be the man to beat in Edmonton this weekend. He's leading the Indycar road race championship with three more road courses remaining on the schedule. In NASCAR, feuds aplenty exist with Brad Keselowski and Carl Edwards going at it again this past weekend. The "have at it" attitude which has prevailed in NASCAR is likely to play out at Indy in the corners where the track has historically only offered one groove and passes will be hard to come by. As depicted in my lead photo, Kurt Busch and Jimmy Spencer found that out the hard way in Turn 3 a few years ago and plenty of other examples exist from the Brickyard. The Bodine brothers spinning each other out in the first Brickyard. Robbie Gordon and Greg Biffle doing a synchronized spin in Turn 1 a couple of years ago. Busch and Kevin Harvick going to the wall together in Turn 2 more recently. With Dale Earnhardt Jr., Jeff Gordon and a number of other high profile drivers on long losing streaks, something will have to give and I would expect some desperate moves once the final pit stops have been made. Can you say "Green, white, checker" three times? How about "checkers or wreckers?" Someone will keep the fenders on and win Sunday but you know there will be controversy. Hopefully not like the tire debacle of two years ago and I'd really hate to see a pit lane "violation" take out a sure race winner like Juan Pablo Montoya last year.
It's hard not to be on alert for something highly unusual for the Brickyard however. There was lots of talk about a "fix" being in for Little E in the recent Daytona Nationwide race when he ran his daddy's Wrangler paint scheme and the #3. Junior's fans will be out in droves to see him kiss the bricks Sunday, but Hoosiers Jeff Gordon and Tony Stewart will be highly motivated and have legions of their own fans hoping they can take another victory at Indy. Jimmy Johnson has to be the favorite again this weekend; even though he hasn't been running great lately, he knows how to get to the front at the Speedway. I'd like to see Montoya run with the red mist this year and take back what was taken from him last year. His style is perfect for Indy and it's about time he won an oval race.
Let the feudin', fussin' and fightin' begin. Gentlemen, start those tow trucks. Better have the flatbed hauler ready just in case.
Posted by Jay Alley at 9:03 PM