It's hard to believe that it has been six weeks since we were at Mid Ohio Sports Car Course for the Indycar and American LeMans Series weekend. Yet tomorrow I will be heading back there again to shoot the final race of the 2011 Rolex Series where season champions will be determined. Scott Pruett and Memo Rojas have all but clinched the Daytona Protoype class title and essentially just need to get to the green flag to clinch for Chip Ganassi's sports car team. The production based class title will be fought out to the checkered flags Saturday afternoon as the Rolex Series takes on the rolling Mid Ohio circuit on a fall date for the first time in years, departing from its traditional late June weekend to cap its season at one of the best natural terrain tracks in America.
It's even harder to believe that my racing season is winding down, just as race series begin to crown their season champions - the Rolex Series being the first to do so this year. After this weekend at Mid Ohio, I have assignments for the Indycar event at Kentucky Speedway and NASCAR at Talladega, both of which could have significant impact on those series season championships. This is the first year I have even shot more NASCAR races than Indycars and it's been a wild ride in many ways, beginning back in February when I drove solo to work the Daytona 500 for Associated Press (AP). So much has happened since then and the hits just  keep on coming. 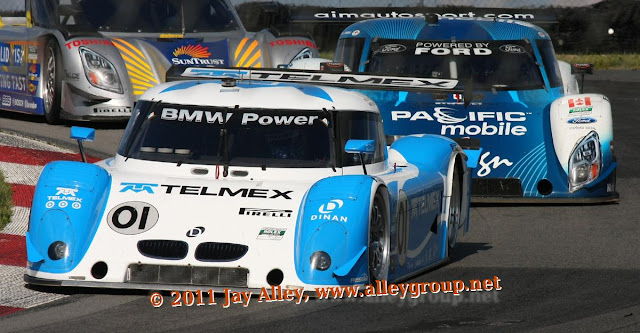 Since I was at Mid Ohio in August, I have found it difficult to get time to write. First I had two racing photographer friends pass away within a few days of one another and attending their visitations really effected me more than I had thought. Then came the Atlanta road trip for AP for the Labor Day weekend NASCAR event which went great until rains came Sunday night and caused us to miss the Sprint Cup race which got postponed to the following Tuesday. In and around all of that, I had a high school football game to shoot at Lucas Oil Stadium, my education courses at Marian University started up again and I got a new job which started the day after we got back from Atlanta. No rest for the wicked as they say...

Meanwhile in Indycar, controversy and intense competition have ruled news about the series. Will Power had his by now infamous meltdown at New Hampshire when his double bird salute was caught on live television after an erroneous late race restart got everyone's emotions running hot. He then proceeded to dominate at Sonoma and the inaugural Baltimore and slice Dario Franchitti's huge points lead to a mere five points as the teams all head to the road course at Motegi in Japan this weekend. Power has been masterful on road and street circuits so another strong finish this weekend will put even more pressure on Dario with just two races remaining after Japan. Unfortunately for Power, the last two races are on ovals (Kentucky and Las Vegas) which have not been his strongsuit historically and his only oval track win was garnered in controversial fashion at Texas this past June when the lineup draw favored him and put Dario at a disadvantage.
Add to this mix the fact that Danica has finally confirmed her departure to NASCAR next season even as she returns to the site of her only Indycar win (albeit on the now earthquake damaged oval at Motegi). Indycar has also announced that Dan Wheldon now gets a shot at the $5 million at Las Vegas in addition to spearheading testing of the 2012 Dallara Honda package. In NASCAR, the Chase field has been set and the final ten race sprint gets underway this weekend at Chicagoland Speedway. So there's plenty of news in all the major American racing series and I'm looking forward to doing my part from Mid Ohio this weekend. Stay tuned for photos and commentary, both here, on my Twitter feed @alleygroup and through postings on American Motor Journal's developing website. See you in the Keyhole, the esses, the Carousel or somewhere around Lexington, Ohio this weekend
Posted by Jay Alley at 6:33 PM