Daytona Addendum: More Rain and It's My Fault 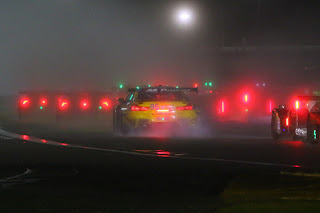 Well I made it to Daytona exactly on schedule Thursday and everything has been great: until last night. I had a flashback to my last Daytona trip, in 2014, when I came for the Daytona 500 and rain delays pushed the race into the evening. This time the "moisture" started hitting the track around 8:30 last night and persisted through the early morning hours as the clock ticked on the 55th Rolex 24 Hours race. Back in 2014, I got back to my hotel at 3:30 in the morning and had to get up at 5:00 to catch my flight home. This year there were no rain delays per se, but the field ran behind the pace car for nearly 2 hours stating around 5:15 this morning. Thankfully, I was in the media center when that occurred, although I did get blamed by at least one photographer friend accused me of starting the rainfall. Ironically that was about the time I finished shooting some rain shots after getting maybe 2 hours of sleep in my rented Jeep between 2:00 a.m. and 4:00 a.m. 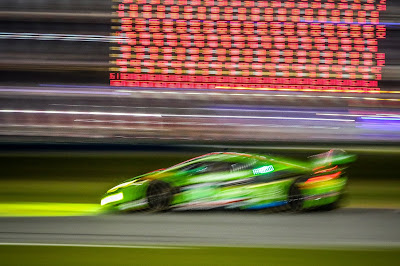 This weekend has been every bit the experience I had anticipated. I have taken over 5,200 images since I got here Thursday around noon. There has been all kinds of unusual situations to photograph and lighting has fluctuated wildly so I have been able to do some "concept" photos like this one as experiments in slow speed panning. Since I have not been the lead photographer this weekend, I have been able to do variety of shooting without the need to ensure a certain image is produced. That may or may not be what motorsport.com is looking for, but I have certainly submitted enough photos so they could decide what gets run and what doesn't. The Rolex 24 is such a unique event and I am so glad I chose to come down to start my 2017 racing season here. I even went to the beach yesterday so I could see the ocean and today the rain is supposed to stop so the finishing hours will be dry.

Now there are less than 6 hours in the race and then it will be over, seemingly as quickly as it began. But after a year's worth of anticipation and planning, that shouldn't come as much of a surprise now, should it? Until next time, got to motorsport.com to see my photos and I won't be surprised if see you at a racetrack somewhere soon.