Theriault Does It Again: Grabs Win #7

This is no Lucky 7 I'm talking about, even though the number on Austin Theriault's car, 52, adds up to seven. I'm talking about a champion in the making who came out of the pack late in the race once again to win an ARCA Racing Series race for the seventh time this season! This time he did it at Kentucky Speedway after another green-white-checker finish. Now there's only one race left in a 20 race season that has turned into the Austin Theriault comeback show and I have enjoyed every minute of it. He's won four of the last five races so his hot streak has come at exactly the right time to stake his claim to the 2017 ARCA season title. And this win comes at the conclusion of a grueling stretch of six races in 33 days that has shown the true mettle of the Kenny Schrader Racing (KSR) team and showcased the experience of their driver Theriault against his mostly younger competition. As the Chief Photographer for the ARCA series, I have witnessed this run and it's almost been like watching a modern day tortoise and the hare story. Austin lets the young guys rush out in front and burn up their tires while he bides his time and waits for the right moment to pounce. Don't forget he finished second in the other race of these last five and he's built up a nearly insurmountable 400 point lead in the championship chase heading into the finale at Kansas Speedway on October 20th. I can't wait to see the entry list for the Kansas race fill up and see who decides to join in the hunt for the checkers one last time this season. 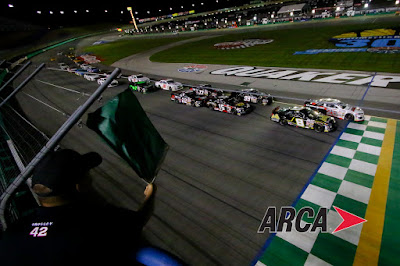 The 2017 season as a whole has kind of followed the same pattern as Theriault's racecraft. Youngster Dalton Sargeant started off the season on a hot streak and won three races but hasn't been able to get his Cunningham machine to match Austin's pace when it counted. Sargeant's results have been good enough to place him second overall this season but I'm sure he was looking for more than that this year after taking over the #77 machine that Chase Briscoe drove to the season title last year. Sargeant's teammate Shane Lee hasn't been able to muster a win but he's still third in points after posting 13 Top 10 finishes in the 19 races run so far. I know he's chomping at the bit to get the 22 car into Victory Lane, but Theriault's dominance has been such that only one other ARCA regular has been able to win a race in 2017, and that was rookie Riley Herbst at Pocono in June. Herbst is currently fifth in series points behind his main competition for Rookie of the Year, Gus Dean. That battle will go right down to the wire since their points totals are extremely close with just  one race remaining.

This season ARCA regulars have accounted for 11 wins of the 19 races contested and Austin Theriault has seven of those. The remaining list of eight race winners reads like a who's who of stock car racing's future stars with Justin Haley winning both times he raced this year, 2015 ARCA champion Grant Enfinger, Christopher Bell and Harrison Burton each winning in the only races they ran, plus Chad Finley, Kyle Benjamin and Brandon Jones each swooping in for a race win apiece. I admit that I am biased with my insider's view, but I tell people all the time that you need to get out and see these kids run for yourself. I'm sure you will be favorably impressed with the level of skill and the quality of equipment at the front of the field. Most importantly, I know you will enjoy the racing as these kids get after it, especially as the laps start to wind down and they sense it's time to go. I love it and after more than 10 years covering the series as a photographer, I believe the series has never seen better racing and it just seems to get better every season. Granted, ARCA is regarded as a training ground for drivers, mechanics, crew members and team owners, but the talent level is there and there is no questioning the desire of everyone involved.

The biggest challenge for me at each race is just getting editing done once the race is over. By the time we are done shooting Victory Lane and we get back to the ARCA trailer to edit, any ARCA staff who aren't involved in post-race tech inspection are busy packing up all the gear in the semi trucks and getting ready to hit the road. Our first priority is to get a Victory Lane photo or two out to marketing for use on the ARCA website. Once I start editing from a race, I usually have 700 or more photos to comb through which includes everything from pre-race festivities through the completion of the extensive hat dance in the winner's circle. We have to download files, select the best images, export them to folders, then copy all the files onto ARCA's external hard drive in less than an hour. This means hardly anything can be cropped or adjusted so I mostly pick the ones that are correct coming right from the camera and skip the rest for another time.

I do wish I had more time to be even more selective - to crop more images and set them up the way I'd like - but we just don't have that luxury right now. Maybe someday we will. My main goal shooting for the series is to showcase ARCA with the best quality images we can produce and I think our photography work would stand up against that being done by about any other racing series out there right now. I am quite proud of that and it's a true blessing to get to work with other photographers like Doc Hunter, Rich Corbett and Doug Patterson who share the same philosophy and passion. It's all part of the job and I have no complaints as not many people get to do what we do on a regular basis so I am very grateful for these opportunities. It's surreal to think this season is almost over, but it's been a whirlwind which began with the Rolex 24 Hours at Daytona back in January for me, but that's another story which I will leave for another day. For the time being, I am going to enjoy being at home for the next few weekends before I start officiating girls basketball! Oh yes - did I mention I registered 21,873 steps on my pedometer app at the Kentucky race? Yeah baby! Now I can relax a little.