In many ways for me, 2020 has been a lost year. I'm sure I am not alone in feeling that way. Back in February, I had big plans for this year but they all got quashed when the Covid-19 pandemic shutdown hit Indiana on Friday, March 13th. It's the first year I can remember since 1976 when I didn't attend or work an Indycar race. I went from working 21 racing events as a photographer last year to only four so far this with just two more on my radar. The silver lining in all of this has been I am still healthy. I've also probably prolonged the life of my Civic Si by a couple years after so little driving this year!
Watching from the sidelines and seeing what the various racing series have done this year to get their seasons completed has been amazing. The ARCA Menards Series, where I was chief photographer the last five years, has managed to complete 19 races with only one to go now. It's not the same 20 races that were on the original ARCA schedule, but they are getting it done with just the finale in Kansas remaining. While I was not fortunate enough to be assigned to shoot any ARCA races this season, which of course was disappointing, I still have friends in the series and follow the race results closely. It's still a thrill seeing my photos still being used on the series' website or on Instagram. I know they used quite a few in their media guides this year and I downloaded those for my portfolio whenever I saw that. I always know which photos are mine even when they don't have photo credits! Kudos to Ron Drager and all the ARCA staff for managing the season the way they have.

The NTT Indycar Series likewise has only one race to go and the pandemic restrictions on media kept me from shooting any of the races at Indianapolis Motor Speedway this year. Missing the Indy 500 was heartbreaking, especially after Takuma Sato won since I have been a regular contributor to Autosport Japan magazine since 2013. I don't know who I will be shooting for next season, so I have my work cut out for me this off-season to find another media outlet to work for in 2021. I have several friends who were able to shoot Indycar races this season and I have been living vicariously through their photos. They have done some outstanding work under some really trying conditions. I hope to be out there with them all next May. 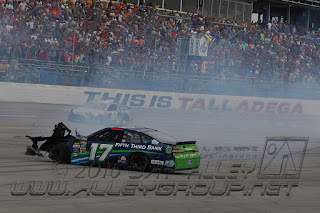 As for the NASCAR Cup Series, they raced at Talladega yesterday and I couldn't help but think about all the times I've made the eight hour, 500 mile trek to Alabama since 2011 to shoot for either ARCA or Associated Press (and sometimes both). I'm pretty sure I would have "made some freaking pictures" yesterday, as the late AP Bureau Chief Dave Martin used to say. The "Big One" where Kurt Busch got airborne happened near the start-finish line and the melee would have come right to me if I had been positioned across the track in my usual photo hole. Unfortunately for me and many of my Alabama friends, none of us got the chance to shoot this weekend due to similar restrictions that I encountered in Indy, so I will set my sights on next Spring and hope that things have opened up by then and I can return to Dega where they say "It's More Than A Race."
It still amazes me that racing was able to resume during the pandemic and there hasn't been a catastrophic outbreak similar to what seems to be happening in college and pro football. Restricting photographers at races never made much sense to me since we can still get photos and socially distance simply by using a longer lens, but I understand the need to be cautious and limit "outsiders" who might not be a part of the usual "bubble" of participants. Formula One has probably done the most extreme job of this in racing from what I have seen and has put on great races in new venues while changing its schedule seemingly at the drop of a hat. 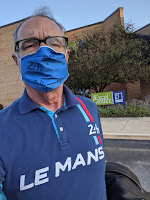 All that being said, every series has had to be flexible. Therein lies the lesson for me in all of this: I need to be flexible too. I understand why all the restrictions were put in place but I didn't like them because they put a major crimp in my plans for this year. On the other hand, since I might be more at risk than many people,  I have to say those restrictions were a hidden blessing for me and kept me from being potentially exposed and having to go through what my father endured before he passed away from the effects of Covid-19 this past June. You might say that racing saved my life this year, but in a dramatically different way than in years past.
As the late Steve McQueen so famously said in the movie LeMans, "Racing is life; anything that happens before or after is just waiting."
And so I wait.
Posted by Jay Alley at 8:42 AM