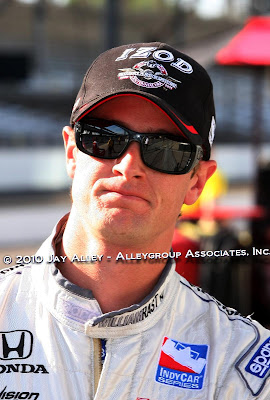 The Indy Racing League continues to come up with "feel good" stories in 2010 as Ryan Hunter-Reay takes advantage of Will Power's gearbox glitch to snatch the Long Beach Grand Prix victory out of the Penske team's grasp. To top it off, RHR dedicated the win to his his recently deceased mother who passed away over the winter from cancer. On the weekend in Indianapolis where the Komen Race For The Cure event was held, I found this dedication especially poignant for a man who struggled mightily at Indy last year just to make the 500 for Vision, and who entered this season as an afterthought driver for Andretti Autosports apparently just because he had IZOD money. Anyone who has followed the IRL knows how quick RHR can be in the right equipment and now he's backed up his earlier strong road course finishes this year for Andretti with a front row starting spot and an opportunistic win in the most historic street circuit in America for open wheel racing.
It was a very unusual Long Beach event with some of the longest green flag running in memory and from the outset, it looked like the other great "feel good" story of the season was going to continue unabated for Will Power. I love the fact that these two drivers are showing the way, as even though Helio has one win to his credit, Power has been the dominant Penske driver so far this season. Who could have imagined before the season began that Hunter-Reay would upstage his Andretti teammates and now be in third in the season standings at this point? His nearest Andretti teammate is Tony Kanaan in ninth and he is even ahead of the powerhouse Target duo of Dario Franchitti and Scott Dixon.
Speaking of Target Ganassi Racing, where have these guys been so far this season? Dixon found concrete at St. Petersburg but bounced back at Barber while Dario's team made a bad tire call at Brazil and his only TV time at Long Beach was when he was getting passed for 10th place by Mike Conway so these guys have been mysteriously erratic during this first quarter of the season where road racing has been featured. Now four oval tracks follow so it will be interesting to see how Dario and Dixie respond, with Kansas, Indy, Texas and Iowa up next to get the series just about halfway through this season. An early points lead like Will Power has today could easily evaporate with a single crash or DNF on the ovals, but you can bet that the Chipster will be kicking butt and taking names over the next eight weeks if the Target boys don't get their act together.
The other "feel good" story I love is Justin Wilson. I felt bad for him after Pink Lloyd slammed the door on him while Wilson was chasing Hunter-Reay yesterday, but if he had been a little more patient, Justin could easily have passed Alex at the end of the next straightaway. Evenso, Wilson finds himself fourth in the season standings for longtime IRL entrant Dreyer & Reinbold which is finally seeing some results worthy of their dedication, thanks to Wilson's obvious talent at the controls. He will win at least a race or two before this season is over and you can bet he will learn from this Long Beach incident. He took Dale Coyne's oft-maligned team to the promised land of victory lane last year and I'm sure he can do it again with D&R. Wilson is another guy who has had to bounce around Indycars since his champ car days, going from Newman Haas Lanigan as Graham Rahal's teammate two years ago in the first year of the IRL-Champ Car unification, to where he is now: a real threat on any road course. Let's hope Larry Curry can pull a rabbit out of the hat for Justin on the ovals this year and keep him up there as a championship contender.
Speaking of Rahal, one more "feel good" story is needed for May: he needs to land a ride for the rest of the season. Watching Long Beach yesterday on Versus, I had remarked to a friend that Graham's job for Sarah Fisher Racing was to bring the car home in one piece, as he was mired with the backmarkers and didn't seem to be making any headway. Not five minutes later, Graham gets taken out in a silly incident by Mario Romancini who "missed his braking marks" going into Turn 1 and stuffed Sarah's pretty yellow car into the tire barrier. Graham was none too happy as you can imagine and it was encouraging to hear him say they thought the tub might have been cracked sometime before the race since none of the adjustments they threw at the car the whole weekend made a lick of difference. If he can land somewhere in a strong team, he will be highly motivated to show well at Indy and the rest of the season.
Now it is on to Kansas and the teams have to change over to oval track trim for the next two months - away with the big nose wings and on with the stagger! Now it's time to go fast, turn left and take no prisoners. With a new Pole Day format for the Top 9 at Indy competing for extra points and cash, it should be a sight to behold. I can't wait to get my first whiff of ethanol for the season. See you in Turn One or Gasoline Alley in a few weeks.
Posted by Jay Alley at 8:17 PM