Racin' This 'n That: It's Almost May & That Means Indianapolis 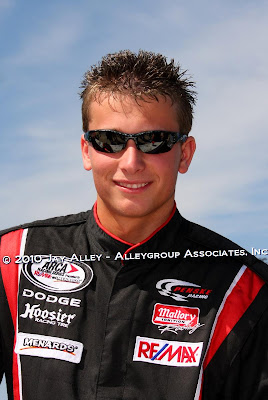 Lots of people are talking about Kevin Harvick winning the NASCAR lottery at Talladega last weekend, but for my money, the best show was Friday's ARCA race won by star-in-the-making Dakoda Armstrong (pictured). With a healthy assist from ARCA regular Patrick Sheltra on the last lap, this 18 year old Hoosier from New Castle pulled off an outstanding pass to snag his first win at 'Dega. His Victory Lane celebration looked like the real deal and this kid is going places. He's already got an entourage of sorts, judging from the way fans hooted for him during introductions at Salem a couple of weeks ago. With his rock star looks and a bundle of talent, he seems destined for greater things in racing. With the young guns from ARCA showing well in the other Talladega events (see Steve Arpin, Parker Kligerman, Justin Allgaier, et al for more on that), perhaps you can understand why I enjoy covering the ARCA series so much. These guys are going places and just need seat time to show their stuff. Well done gentlemen.
While the stock car series are heading for short tracks, the IZOD Indycars are about to attack the first oval race of the season at Kansas Speedway. In another sure sign of spring for IRL fans, that can only mean the Indy 500 is not far off and it is almost May. With a little more than two weeks before the Speedway opens for practice, this weekend's Kansas race will be an opportunity to see what everyone has for their oval track packages. And the news lately has been that Penske has more than everyone else and isn't sharing! What a surprise! Everything from ride height control to front suspension tweaks are rumored to have been on their cars for quite some time. I'm sure the Target Ganassi boys have a few tricks up their sleeves for Penske this weekend and I wish I could be there. Maybe next year...
The 500 entry list is looking quite healthy this year with close to 80 cars ready to roll for about 40 drivers. One idea that new IRL boss Randy Bernard has floated this week involves offering additional prizes and recognition for oval and street/road course "champions" in the future. This is not exactly a new idea as I wrote about that very concept here and on google's usenet Indycar group several years ago. I've often wondered what would have happened if Tony George had done something similar for the initial IRL Indy 500 in 1996 instead of protecting 25 spots for IRL regulars. Racers need cash and while we will never know what might have happened if TG had offered more cha-ching for Indy back then, I will bet the current teams will be quite happy for the extra financial motivation if it happens. I'm not so sure they are going to be as happy about the new Fast 9 Pole Day format at Indy, but it should be a great show for the fans and television.
Speaking of New Castle, one of the best karting facilities around is located there just off of I-70. It is owned by former IRL driver Mark Dismore and the racing there is entertaining and highly competitive. They also offer fast rental karts so if you're coming to Indy this May, it's only about 30 minutes east of town so get out there and fill that need for speed. One of the great things about living here in the Indianapolis area is proximity to grassroots tracks like New Castle and Whiteland Raceway. But the best part is seeing people in racing. Just this week, I ran into Scott Dixon's father at the Marsh grocery in Zionsville. I saw Tim Cindric at the NCAA Final Four earlier this month. Where else do you have a chance to rub elbows with open wheel racing's personalities? In the past, I've run into Vitor Meira at Target, seen Tiago Monteiro jogging on the Monon trail, talked to Mike Conway and Tomas Sheckter at a Colts game, and had the opportunity to play basketball against and talk racing with AJ Foyt IV at La Fitness.
On top of Indy boasting the greatest race course in the world, lots of other tracks are close by. Short tracks like Eldora, Winchester and Salem are within a couple hours easy drive. Chicagoland Speedway, Kentucky Speedway, Mid Ohio Sports Car Course and Michigan International are all with four hours by interstate. And Indiana is peppered with great dirt tracks from Lawrenceburg and Steve Kinser's home track in Bloomington down south to the Terre Haute "Action Track" out west and Gas City in the northeast. If you can't find some racing to enjoy in the Hoosier state, whether as a fan or participant, then you really aren't trying very hard, especially in May, where Anderson Speedway lines up 33 sprinters to run 500 laps on its quarter-mile high banks and O'Reilly Raceway Park runs midgets the night before the 500. And no, I'm not shilling for the chamber of commerce. To paraphrase a local tv ad for another product: "I don't want to sell tickets; I just love to go racing..."
See you at the track soon - but not soon enough.
Posted by Jay Alley at 7:59 PM