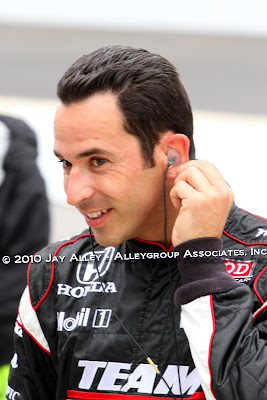 The opening weekend of practice for the 94th Indianapolis 500 is now over and the usual suspects are at the top of the speed chart, led by Helio Castroneves. Target teammates Scott Dixon and Dario Franchitti are close behind after a weekend of schedule interruptions and changes caused by intermittent rainy weather. The only incident of the weekend occurred late Sunday when 2005 Indy winner Dan Wheldon smacked the Turn 4 SAFER barrier. This year's crop of rookies looked smooth and got through an abbreviated rookies only session today with no problems. The track was opened up for all comers at 2:15 and teams quickly got down to business with packs of cars drafting and looking for fast times. Nearly 1400 laps were run today even though the track closed around 5:30 when a steady mist finally got the track too wet to continue practice.

Tony Kanaan shook down five Andretti Autosport cars Saturday but focused on his 7-Eleven ride today and the results showed on the speed charts. Pole Day is shaping up as a battle royale for the Fast Nine spots among the Penske, Target and Andretti camps. With five more days of practice until then, and the prospect of more rain in the forecast every day this week, track time will be at a premium and I expect teams to take advantage of every bit of green light time they get. Indy Racing League officials adjusted today's schedule after Saturday was mostly washed out, so I would not be surprised if more schedule changes are made throughout the week to make sure teams get the time they need to prepare for qualifying. Top speeds today were set in the draft, so it will be interesting to see what Helio et all can run by themselves without benefit of a tow from another car. More of that will be seen later in the week as teams hone in on a qualifying setup.

It was like old home week for me at the Speedway this weekend as I ran into lots of photographer friends and began to feel as though drivers were recognizing me after spending so much time shooting Indycar races the last five seasons. I even ran into Soctt Dixon's dad and shook his hand, asking him if he had been to Marsh lately, after talking with him there a couple of weeks ago in the express checkout line. My brother and I stopped into the 500 Oldtimers suite during one rain delay and Johnny Rutherford walked in with a greeting of "Looks like a bunch of oldtimers in here!" I have not made it out to the corners to shoot yet but there was plenty to do this weekend as I tried to get as many driver shots as possible and spent quite a bit of time atop the F1 garages shooting cars entering Turn 1. It is a great vantage point and one of the few places at Indy where you can really see the drivers working the steering wheel. Several cars were bottoming out going into one when tire pressures were low and showers of sparks were flying as a result. There are a few rookies who still are searching for the correct entry line into One, but I was very impressed by how quickly they all got up to speed.

The prettiest car at the track is the Lotus-themed Dallara of rookie Takuma Sato, who looked quick and smooth throughout his rookie test. The following slideshow is a quick look at pix from this weekend and there will be much more to follow this week as I spend as much time as possible at the Track. I'll be the one wearing the Canon photo vest. See you there!