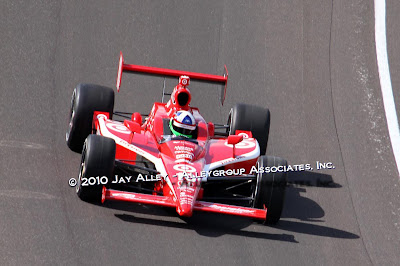 With less than 24 hours before the 94th running of the Indianapolis 500, nearly all the pagentry is over with the 500 Festival Parade this afternoon and the Snake Pit Ball this evening. Teams have completed their final preparations and final strategies are being fine tuned. By tomorrow evening, the driver's face will be know which will be added to this year's spot on the Borg Warner trophy. I have watched thousands of laps this month and been close enough to the drivers to overhear conversations with crew chiefs, read their facial expressions and body language, and have a sense for their level of confidence as individuals and teams. Tomorrow they race!
My picks for this year's race are:
Winner: Dario Franchitti. While Helio is the odds-on favorite, Dario looks ready to win another one, and this one at full distance unlike 2007 which was rain-shortened.
Darkhorse: Dan Wheldon. He was my pick last year and finsihed second on strategy and the Panther team has rebounded from a practice crash and he has looked relaxed and confident.
Sentimental Pick: Ryan Hunter-Reay. He is the face of IZOD and may need to win to keep racing this season beyond Texas next weekend. How could IZOD not keep him running if he wins?
Rookie of the Year: Simona de Silvestro. I saw her moake moves in Carb Day yesterday that veterans would be proud of and I think she will outshine the other rookies in the Class of 2010.
Driver to Watch: Tony Kanaan from 33rd. It goes wthout saying that the Brazilian's internal fire will be buring hot and he will pass lots of cars early. He probably can't win from last place, but who knows? Scott Goodyear almost did it in 1992.
Yesterday's Carb Day crowd was very encouraging and the campers were already well ensconced along Crawfordsville Road and in the Coke Fields. Today the drivers will try to quiet the butterfiles and get some rest to take on the elements, the race track and their fellow drivers tomorrow. This will probably be my last blog post before the race as I am going to O'Reilly Raceway Park tonight for the Star Mazda dn USAC midget races. What's a few more hundred laps this weekend anyway. Then Sunday, it's back to my spot in Turn 3 at the Speedway, watching, waiting, watching and shooting. Stop on by! Go Dario!