The 2nd Annual International Motorsports Industry Show (IMIS) winds up a highly successful run in Indianapolis today with an estimated 18,000 racing industry people attending during the week. With three days of open exhibits and an additional two days dedicated to technology and safety seminars, IMIS is carving out a unique niche in the racing world as the primary trade show where racers go without the general public being invited. Tom Wiesenbach of the Indiana Motorsports Association (IMA) has indicated that roughly 580 racing industry companies are involved in the show which is expected to have an economic impact in excess of $16 million dollars on the local economy.

As with any other business, networking within the motorsports industry has become vital for manufacturers, drivers, racing series and race teams. Walking through the exhibit hall, I have seen recently crowned USAC National Driver's Champion Bryan Clauson, ARCA's Frank Kimmel and NASCAR Nationwide driver Justin Allgaier among others. The ARCA series had a very nice display and the Must See Extreme Sprint Car Racing series was also represented. Beyond the exhibits, almost all of the manufacturer booths had quality peripherals, either as handouts, decals, promotional items or contest drawings. One of the best elements of the show was the ability to have one's name badge scanned into the company's contact system for additional followup. Often at trade shows, there is a lot of foot traffic but little "qualified" traffic. My sense after spending the last two days here is that the majority of attendees at this show would be considered qualified traffic and generate quality leads for companies that they could turn into future business. 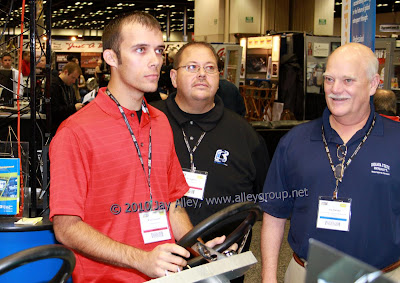 With the show designed to create business for motorsports related companies, whether that goal has been achieved remains to be seen. The fact that all the booths sold out this year and exhibitors are already signing up for 2011 would seem to support the show's purpose. The promoters and businesses involved must be happy with those indicators. The most surprising element of the show to me, and one which probably needs to be pursued further, is the involvement of university programs where the future technological development for racing can find talented personnel to drive the industry forward. Indiana State University, where Bryan Clauson was playing a drag racing simulator, Northern Ohio University and other institutions for higher education, almost certainly have a role to play in the development of racing's future. With Dallara's new plant being built in Speedway, Indiana, and a host of racing businesses already located on Indy's west side and in Hendricks County west of Speedway, the young men and women in school today need to be invited to shows like IMIS to build their own networks and provide an outlet for them to serve internships, or find future employment in racing related firms. The sky is the limit and racing takes money and talent. These were all on display here at IMIS and I am glad I got the chance to attend this year. Now the real work begins.