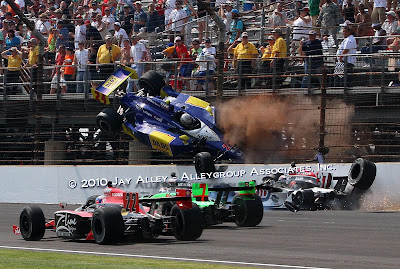 It's all over but the shouting for the 2010 racing season and there have been many memorable moments to savor through the winter months. Soon enough, the Rolex series will be running at Daytona around the clock and the 2011 season will be underway. In the meantime, here's my take on The Good, The Bad & The Ugly from 2010. My slideshow at the end of this post chronicles many of those moments captured through my cameras this season, including my sequence of Mike Conway's horrific crash on the final lap of the Indy 500.
The Good
As a photographer and diehard Indycar fan, some of the best moments came from the IZOD Indycar season. Will Power's comeback from serious injuries in 2009 to battle Dario Franchitti for the series championship was among the best stories of the season. While Power came up short in his challenge for the series title in the final race, this storyline provided a fantastic backdrop for lots of other good news in the series. Tony Kanaan's victory at Iowa chased away his demons at that short track and provided Andretti Autosport with one of its few highlights for the year. Ryan Hunter-Reay was rewarded will full season support by IZOD after a strong early season showing when it appeared his ride was in doubt due to funding; his job at Andretti is now secure for the next two seasons as a result. One of the big surprises of the season was the strenght of Alex Tagliani's new FAZZT team which showed surprising speed and consistency throughout the year. The series also announced that its Road to Indy ladder system would be bolstered by Mazda going forward and a $300,000 reward would be given to the USAC Driver's Champion; this funding puts Bryan Clauson in a Firestone Indy Lights ride for six 2011 oval races. Rising stars like Conor Daly have benefited from the ladder system already, and his Star Mazda series domination resulted in a GP3 test in Europe following the season along with television interviews during the Indycar finale on Versus. Graham Rahal appears to be set for a full 2011 season with financial support from National Tire & Battery and JR Hildebrand, the 2009 Firestone Indy Lights champion, is jumping into the Panther Racing seat occupied for the last two seasons by Dan Wheldon. Lights driver Pippa Mann got her first win at Kentucky and the talent level in Indycar and its support series continues to be on the rise. Indycar's best news came during silly season when it was announced that Dallara would build it's new Indycar facility in Speedway, Indiana and Chevrolet, Lotus and Honda would all provide engines under a new technical formula for the 2012 season.
Chip Ganassi's success in multiple series, including winning the Daytona 500, the Indy 500, the Brickyard 400 and the Indycar and Rolex Series championships was a remarkable feat. Dario got his second Indy 500 win, Jamie MacMurray won Daytona and the Brickyard, while the duo of Scott Pruett and Memo Rojas cleaned up in the Rolex Series despite rules changes during the season which were intended to handicap them. Congratulations to all the Ganassi teams for their awesome 2010 seasons! In NASCAR, Jimmie Johnson had to come from behind in the Chase to secure an unbelievable fifth straight series title. The ARCA series had a stellar year with young guns taking over for the veterans and continuing to brand itself as a proving ground for up and coming stock car racers in need of taxicab experience. Dakoda Armstrong's last lap charge at Talladega was a sight to behold and he grabbed a second win at the Salem Speedway high banks to mark himself as a driver to watch. I am personally excited that ARCA has announced a return to Winchester Speedway next year after a four year absence, and that it will team up with the USAC Silver Crown and Midget Series at O'Reilly Raceway Park in July as part of NASCAR Speedweeks leading up to the 2011 Brickyard 400. I could go on and on with the 2010 good news from the racing world as there was far more good than bad from my perspective, but "The Bad" and "The Ugly" often generated more headlines this season.
The Bad

For Indycar drivers Tony Kanaan and Dan Wheldon, "The Bad" included the loss of their rides for 2011. For TK, it was a simple matter of economics while Danny left an acrimonious situation where he had to sue the team over contractual issues and finds himself on the outside looking in despite two consecutive second place finishes in the Indy 500. While Will Power's season was a bright spot for Penske Racing, Helio Castroneves had one of his worst seasons in years with several DNF's and the memorable black flag at Edmonton after which he went ballistic on Indycar officials and created the season's most embarrassing moment. NASCAR found itself on the downslope in attendance and television ratings again in 2010. Several factors have negatively impacted NASCAR including the cookie-cutter "Car of Tomorrow", the locked in teams being guaranteed starting spots which has made qualifying largely irrelevant, the lack of exciting racing at most tracks, but mostly I believe the Chase format is to blame, since winning races no longer seems to be the primary objective in the series. Attendance at this year's Brickyard 400 was the worst ever with thousands of empty seats available. Danica Patrick's foray into NASCAR was essentially a "made for TV" sideshow and her race results left much to be desired as she is still learning how to drive a loose racecar. For me, part of "The Bad" was that I was unable to travel to shoot as many races as I would have liked in 2010, but I am hopeful that 2011 will be my breakout year as a motorsports photographer.
The Ugly
Ugliness in racing can take many forms, most often from on track altercations involving serious injuries or worse for drivers or crew members. One of the ugliest incidents this season involved Mike Conway in Indycars and USAC driver Shane Hmiel, albeit with different results. Conway's Turn 3 accident was by far the worst I have ever photographed and when it first happened, everyone feared the worst. Thankfully he is on the mend from leg and back injuries and could be back in an Indycar next season. For Shane, the recovery from a USAC Silver Crown flip at Terre Haute is much more daunting and he may never drive again. Shane's seems especially ironic considering the personal demons he has battled and the fact that he had back to back USAC sprint car wins at Salem and Winchester that I photographed less than a month before his accident. Shane's Facebook page is "The road to Recovery" and I would encourage any race fan to support him and his family in any way they can. The Firestone Indy Lights accident I photographed at Kentucky Speedway was ugly as well but no one was seriously injured in that one.
Post Script
For racing drama and excitement, nothing beats a good wheel to wheel battle in an open wheel car in my opinion. As a racing blogger and photographer, I have been very fortunate to be up close and personal with teams and drivers over the years and am grateful for the opportunity that American Motor Journal has provided me to cover some of the most dramatic races in recent history. I never want to see anyone get hurt and working as a photography often gets me in position where I could be in harm's way personally. So far, I have been lucky. As racers often say, "I'd rather be lucky than good". I'll take either. See you at the racetrack next season.
Posted by Jay Alley at 8:59 AM

Great recap and slideshow brother. Great pictures. It's nice to know I was with you for at least one of those races. See you soon.