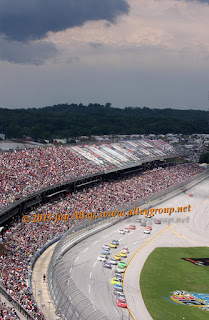 Back home in Indianapolis after an 1183 mile round trip to Talladega, so many moments to savor from a challenging and productive weekend shooting the NASCAR event for AP. On Twitter last night I joked that the "24 Hours of Talladega" was finally over when I was leaving the track at 9:30 in the evening, and even though the racing didn't consume 24 hours, at times it sure seemed like it. I don't recall ever being at a race weekend with so many rain delays and the fact that both the races went overtime is remarkable given the conditions.


The weekend had a little bit of everything, but mostly it had lots of rain. Driving down Friday: heavy rain. The ARCA race (which I missed while en route) was rain shortened. Saturday more rain: Sprint Cup qualifying rained out and the Nationwide race had a long rain delay before getting started and then finished in near darkness. Then Sunday started off beautiful but ended up cold, wet and racing into darkness again with a three hour rain delay after 125 laps of the Sprint Cup race. Having been through tornadoes in the area at my first Talladega weekend two years ago, I know how volatile spring weather can be down there and this weekend I was especially glad I wasn't camping!

From a photography standpoint, the biggest challenges were keeping my gear dry and tweaking the ISO to try and keep up with the fading light on Saturday & Sunday. Staying warm was also an issue as every time a rain shower would blow through, the air temperature would drop. I was on top of the tallest grandstand with no cover or anyplace to hide from the chilly wind coming in from the west. It was interesting waiting out the rain delays and talking with the locals who were commenting on my camera gear with their pronounced southern drawls:  "I'll bet you can see Mars with that thang!" I did a lot of people watching during the delays and there's an odd sort of solitude that comes with being in a large crowd and not knowing a soul. I spent almost nine hours in position, in the stands or taking cover under the stands Sunday, but the end result was well worth it.

There was a surprise winner in Sprint Cup Sunday (David Ragan) and a photo finish in the Nationwide race Saturday so I know the fans felt like they got their money's worth. Matt Kenseth dominated the race and looked like a sure winner most of the day. Then Carl Edwards took the lead just before the red flag for rain and despite his best rain dance, the race was restarted three hours later so he became an also-ran. Jimmy Johnson made a quick two-tire stop late in the race and had his chance to win evaporate when the Ford duo of Ragan and David Gilliland charged to the front, seemingly out of nowhere, to take the top two spots in a green-white-checker finish. And of course there was the usual "Big One" wreck, two of them in fact, so the hooting and hollering fans got the drama they came to the track for.

One of my favorite pictures of the day came early Sunday morning in the garage area where a four-year old boy was hanging on the fence and calling out driver names as they headed to the Sprint Cup driver's meeting. It brought back memories of myself at a similar age, so it would be interesting to see him in twenty years to see if he's been bitten by the racing bug as I was so many years ago. My pictures from the race after the red flag are still in Alabama and I have to wait for a disk to be mailed to me before I can post a complete gallery from the Sprint Cup race. Until then I give you a couple of others just to whet your appetite. Now it's back to Indycar racing this weekend with the opening of practice for the Indianapolis 500. It sounds like we may get 33 cars for the race after all so it will be interesting to see how things play out between Saturday and May 26th. Come on out to 16th & Georgetown. I should be there most every day pounding around the garage area, in the pits, the media center - you get the point. I will be everywhere! See you then.