Mr. Photographer At The Track 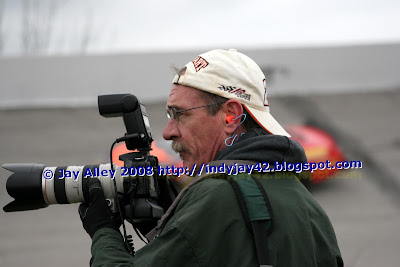 Every season I try to have a pet project to work on. It helps keep things interesting when there's downtime, and lord knows if you go to enough races there will be downtime. One year I shot license plates on cars parked in the infield at the Indy 500. Another year I shot flags. Sometimes it has been fans. I love rain puddle reflections and sunsets at tracks too. So this year my pet project was to try and get yours truly at as many events as I could. That is, when I remembered. Thankfully, I had a fantastic assistant at some races who took a few of these, although most are self portraits. Thank goodness I have long arms! It may seem silly but how does a photographer get his picture taken? I'm always on the other side of the lens so it's nice sometimes to be the subject matter. This particular shot was at the season opener at Salem in April for the ARCA race - cold and wet, this the gloves and jacket. Salem marked the first of numerous road trips and hundreds of laps. 220 miles round trip from Indy. 200 laps.

Then Winchester. 150 miles round trip. Rain interrupted the USAC sprints and CRA stock car show during hot laps, so back I went the next weekend, another 150 miles. 100 laps for the CRA contingent, multiple heats and a 30 lap feature for the sprinters. 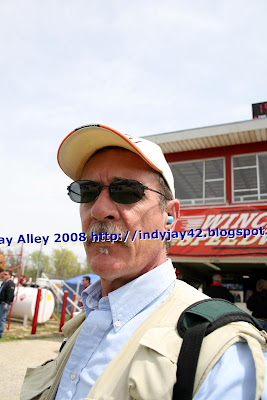 Next up was Indy. Lots of trips in between raindrops. Only 40 mile round trips but probably 8 of those for 320 miles. Walking the garage area day after day looking for something different. Trying out Canon gear. Awesome 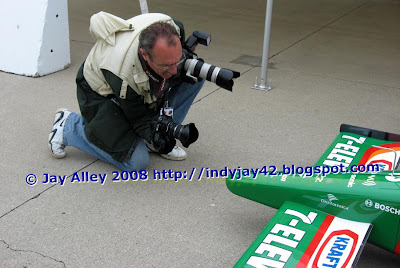 baby! Then 200 laps and 500 miles for the IRL main event, after a rain shortened carb day and postponed Indy Lights Freedom 100 on the day before the 500: 40 more laps.


In between the Lights race and the 500, I drove to Kentucky Speedway for the Kimmel Street Stock Enduro, roughly 300 miles on the road and 100 laps (150 miles) in the race. In June, I made the first of two trips to Mid Ohio, first for the Rolex sports car series. It was about 600 miles round trip on the road (with a detour to the worst hotel ever) and two straight days of racing in the rain. Too many laps to count with all the support races and the main event with the DP & GT machines.
Then in July things really got busy. 650 miles to Nashville and back; more rain and a shortened IRL event from 200 laps to 178. Back to Mid Ohio the next weekend for the ALMS and IRL events. Another 600 miles on my Integra, plus the 3 hour ALMS race and 200 miles for the IndyCars. 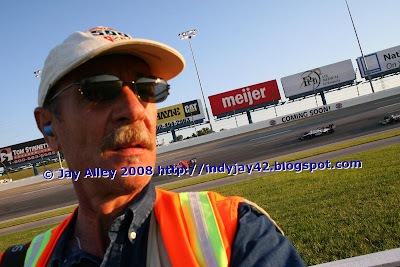 The next weekend I got to sleep in my own bed with the Brickyard fiasco in Indy so that was only three 40 mile round trips (120 miles) and 160 laps in the parade, I mean NASCAR "race". Two weeks later (now we're in August) it was back to Kentucky for the IRL and another 300 miles on the road and 200 laps on the racetrack. Then in mid-September, it was off to Joliet for the Chicagoland IRL event with my assistant - probably 400 miles or more on the road with the long distance trip to the hotel in the middle - and a fantastic (200 lap) 300 mile race that decided the season championship, Helio charging from worst to first in a photo finish to win the race but Dixon took the season title from second on the track. 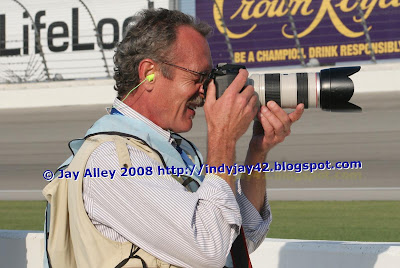 The next weekend was an Indy-Salem doubleheader, shooting MotoGP in the rain on Friday (40 miles) and traveling to Salem the next day (220 miles) for another 200 lap ARCA event. And that was that. Which also explains why I haven't written much here since then: I haven't been to any races and now it's almost Christmas with New Year's around the corner so I figured an update was past due (even if my assistant is the only one reading these!) But that's OK. I had a great year for 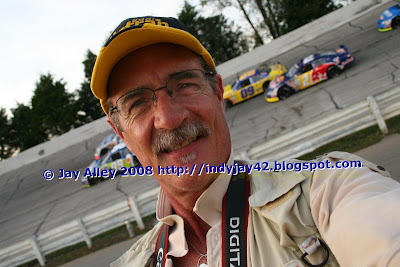 American Motor Journal and had 8 pix used in their season ending "Best Of 2008" issue. I'm grateful for the opportunity to do this kind of work. It's nice to be passionate about what you do. And this is what I do.

So after all that, what is the tally? Roughly 4070 miles on the road to go racing. Roughly 2140 laps of racing. And that doesn't include all the practice laps at Indy or any of the other tracks. Probably more than 10,000 images shot on digital.

I'm exhausted just writing about it. But it's all good and I can't wait to pack up and hit the road again. Is it May yet?
Posted by Jay Alley at 9:31 PM No comments: 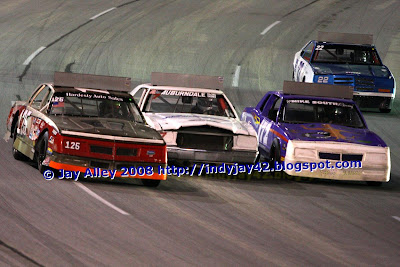 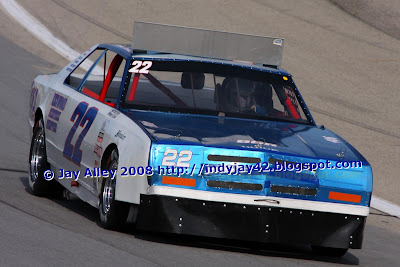