See You Next Year Daytona

The last few days have just whizzed by as I've flown to Orlando on Southwest, shuttled to Daytona, spent the better part of three days at Daytona International Speedway, and then retraced my tracks to fly home Sunday night. This was not my first time at Daytona but it was my first time working the ARCA Racing Series event, so there was a newness to the experience that kept me on my toes. It was a big weekend for the series which got officially rebranded as the ARCA Menards Series during a Saturday afternoon press conference. It was a well kept secret but I was told early in the weekend that I needed to be ready to photograph a press conference at 12:15 Saturday afternoon so I had an idea that something big was brewing. It was cool to be there as ARCA President Ron Drager, the head of NASCAR Mike Helton and Menards owner John Menard talked about the deal. Once the deal was announced, we all got to put on our new shirts and hats so that was exciting to be a part of.

I am fortunate to have the chance to photograph the series and was excited Thursday to be the person primarily responsible for taking new headshot photos of all the drivers who were entered for the race. I did 33 of 35 drivers, plus had to redo one of them when the driver got a new uniform to start off the season. Those headshots will be used all season long on television when driver introductions or starting lineups are being announced, so I can't wait to see the FS1 telecast I recorded to see how they looked. I knew something was up when I was instructed on Thursday to photograph all the drivers without a hat and then also with a Menards hat, and not to use the ARCA hat we had used the last few seasons. As a photographer, I had a blast using the studio light setup to take those photos as I don't often get the chance to work with that kind of lighting.

I was working with another photographer, Rich Corbett, all weekend and my brother Steve came in Thursday night,  so we had fun exploring the speedway and hitting a couple of restaurants I knew about from previous trips to Daytona. Thursday's track activity was late in the day so Rich and I split up to get different angles of the cars in track. We have to be sure we get photos of every car entered so that's usually one of the first orders of business. The lighting and blue skies were perfect Thursday afternoon for that so Friday  we concentrated on people photos - drivers, team owners, crew chiefs, etc. Friday turned out to be another perfect  day with lots of sunshine and high temperatures near 80 which was a real pleasure to experience after dealing with 40 below wind-chill at hime in Indy the previous week. Racing is a people sport after all so we try to show the human side through our pictures. Most motorsports photographers are gearheads at heart so we naturally love the cars but sharing the excitement the drivers and teams feel at the track is what really makes it meaningful.

The weather Saturday wasn't nearly as nice as Thursday and Friday had been, as a persistent cloud cover had rolled in with much cooler temperatures and an occasional misty rain falling. Our race, the Lucas Oil 200, was delayed a little and everyone was ecstatic to see lap 41 go onto the scoring pylon since that meant the race was official. The alternatives if we had been postponed were not pretty so even when I started feeling some sprinkles with a few laps to go I was not in the least disappointed. We got the race in, the race was highly competitive among several young "kids", there were no serious incidents or injuries, so all in all it was a great day.

One of the best things about race day was getting to start the race in the flagstand. I have done that at many other racks on the ARCA circuit but it was first time doing it at Daytona and that was a real thrill. We had a guest flagger from series sponsor and tire supplier General Tire and I always enjoy seeing their reactions to the full field of race cars thundering past right under our feet. The whole flagstand shakes when the cars are fully up to speed after a lap or two and the view from up there is spectacular to say the least. This is my fifth season as the chief photographer for ARCA and there are "signature" photos I am trying to claim and those flagstand shots when the green flag flies are in that category. It doesn't get much better than that, and this time I ran into those same General Tire people in Victory Lane near the end of the race and they still had huge smiles glued to their faces, so you could tell they got a thrill out of the experience as well. It's hard to leave a racetrack without taking something besides memories with me and I often go through a bit of an emotional slump after a race weekend.

This race I got new shirts and a new ARCA Menards Series hat, plus a few thousand photos and that's going to have to be enough for awhile as I  won't be going back to a race until April. This coming Tuesday I have a date with a thoracic surgeon who will be excising a cancerous spot from the upper lobe of my right lung, so wish me luck. I hope I don't need it and I believe I will come out of the operation with flying colors. I am certainly thankful for early detection and for the opportunities I have to photograph races, sports events, travel locations, and my beautiful fiance and grand-babies. Until next time I get a chance to write, here's a few more photos from the Lucas Oil 200 that Harrison Burton won for Venturini Motorsports. For even more photos from the race, be sure to go to the ARCA Menards Series website and check out the photo galleries. See you soon!

I will be living on Daytona time for the next four days as I finally get to make the trek to the "World Center of Racing" for the ARCA race weekend. I say "finally" because it seems like it's been forever since my last race, which was in Kansas last October. I am "finally" getting to work the ARCA race at Daytona International Speedway since it will be my first time shooting for the series at the home of NASCAR. It is not my first race at Daytona by any means as I shot my first Daytona 500 in 2011 and followed that up in 2012 and 2014. Plus I've worked the Rolex 24 Hours three times since 2014, so I feel like I know my way around down there a little bit although I'm sure it will be different with ARCA in some ways. In any case, I am happy to get out of Indianapolis for a few days, away from our crappy February weather and get back to my happy place, which right now would be just about any racetrack. Why not Daytona? I think I could do this every year. 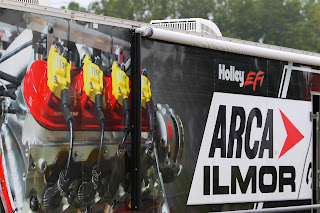 This is going to be a big year for myself and for ARCA. I am writing this post in the Indianapolis airport and am now just 13 days away from scheduled lung surgery to remove a spot in my right lung which the doctors say is cancerous. My fiance and her brother have each had some nasty health news in the last couple of weeks so we are all reeling from these revelations so having a break now is very timely. This weekend will be the first ARCA race under NASCAR ownership of ARCA so it's a chance to be seen and to meet more NASCAR personnel on their turf. I'd like to keep doing this job for a long time, so getting in a solid weekend of photography and networking will help me get through the surgery and recovery with something else to look forward to. I will probably miss the race in March at Pensacola but should be good to go for all the rest of the season starting with Salem Speedway in mid-April. I still don't know what I will be doing for the Indy 500 in May but I'm sure something will get worked out, even if it is just shooting on race day, which looks likely due to my ARCA commitments. That will seem strange but I have to work where the work is and right now that's in the ARCA Series and I am very grateful for the opportunity.

As they say, "it's good work if you can get it" so I can't take that for granted. I have no real idea what the recovery from this surgery will be like but I think it will go well, given my overall physical condition which is excellent. Last Friday I passed the three year mark tobacco free so that's also in my favor. We never know what the future holds and I have worked very hard the last dozen years or so to get to this point with my photography so I am excited to build on that this year. Over the winter I got to photography a Purdue football bowl game and a Purdue men's home basketball game so I know the opportunities will come if I put myself out there. That's what I've been trying to do on a limited budget (I am a teacher after all) so any work that pays is good work! I gave up basketball officiating this winter to open up time for other activities which has worked out well, except for this surgery thing which I hope isn't a setback.

But if it is, then it's just a setup for a comeback and I am ready. Thanks for reading. See you at a race somewhere soon. Look me up - I'll take your picture!
Posted by Jay Alley at 6:20 PM No comments: