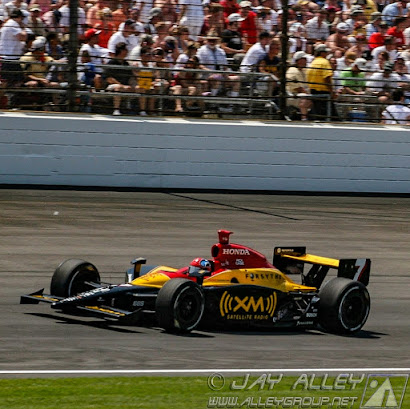 I am incredibly disappointed about not getting media credentials to photograph the race, or even being able to attend, and that disappointment has added a foul edge to my life recently. As a result, I have decided to stop my daily countdown to the 500 after this post. I am going to try and let that disappointment go and support my photographer friends and colleagues who were lucky enough to be chosen to document the event. In addition, I will not be posting any more of my Indy 500 photography, which dates back to 1984, until this year’s 500 is over in order to defer to those who are out at the track working this race. .As the late Dave Martin at AP used to say, “Go make some freaking pictures.”

My close friends and family know why I say this most recent disappointment has tainted my life, but people who only casually know me may not understand why missing the 500 is such a big deal. For context, I would suggest the last 18 months of my life needs to be considered as a backdrop for this most recent punch in the gut. In February 2019, I had lung cancer surgery to remove part of my right lung; I had found out earlier in the year that I also had emphysema. As such, all of this year during the pandemic I have had to live with the knowledge that I am in a high-risk group and consequences could be dire if I were to contract the coronavirus. So try to imagine living under the cloud of constant anxiety every time you go out in public.

At the same time I was dealing with lung cancer recovery last year, my fiance was preparing for her own surgery after finding out she had breast cancer. So we were both trying to recover from major surgeries most ofl last year. Earlier this year, my fiance’s brother died of lung cancer. While he was struggling and ultimately succumbing to his cancer, my 85 year old father was in a rehab facility in Indy for a variety of illnesses. The last time I was able to see him in person was February 29, 2020. Meanwhile, a trip we had planned for France and Greece, and a return trip for me to shoot the 24 Hours of LeMans race, was scuttled and the Indy 500 was postponed because of Covid-19. On May 12th, we learned that my Dad had contracted the virus. The last time I talked with my father was on my birthday, May 31st and then he died June 10th as a result. In that last conversation he told me that 19 people in his facility had died from the virus, so watching him fight the virus on top of his other infirmities added stress all year long.

Within the last two weeks, I learned I would not be able to go to the rescheduled LeMans in September, nor would I get credentials for the 500. My string of consecutive Indy 500 races started in 1976 and was unbroken prior to this year, so missing out has just been the straw that broke the camel’s back. So if I’m curt or snap at you, then know in advance that I’m sorry. Try as I might to control my emotions, they burst through sometimes. If I am more of a jerk than normal, it’s because my nerves are raw. Living in a constant state of anxiety can only be done for so long before something has to give.

Being forced to miss The Race is no joke. Did I also mention that my work as Chief Photographer for the ARCA Menards Series totally evaporated this year as well? Loss after loss after loss these last 18 months has exacted a toll on me that’s left me feeling exhausted, constantly angry and nearly broken spiritually. But I am getting help and am grateful for the people in my life who can prop me up and point me in the direction I need to go. If I hadn’t been able to go out and ride my bicycle this spring and summer - and I’ve been riding the wheels off of my Trek  this year - I hate to think where I would be mentally.

I write this now not to make excuses for popping off but to explain the precarious state of mind I’ve been living with. The sarcastic joke in our family is that the “Shue Grit” combined with the Alley stubbornness is a double whammy.  I was raised to figure things out myself so it’s hard to ask for help. I do not normally show much emotion and I don’t get too close to very many people. Moving from town to town frequently as a Methodist’s minister's kid is partly responsible. My training as an athlete is behind some of that too - you can’t let people know when you’re upset or that you’re nervous; you have to keep your cool to perform when the pressure’s on. If you know me, then you know the things I am passionate about and motorsports photography is at the top of a fairly short list.

Like a bad country music song, when the things you love are stripped away one by one, what is left? I’m still trying to figure that out but I guarantee you I will. Once I do, I’ll be able to play that song in reverse and get back most of what I’ve lost and come out the other side a better and stronger person.