Dan Weldon Smokes Competition at Indy Racing League Opener
Originally uploaded by indyjay42.
The IRL weekend at Homestead was a mixed bag of results for Ganassi Racing. They put a rocket ship under Dan Weldon who was untouchable the whole race and would have probably led every lap if the team hadn't had a miscue on pit lane. For a moment, I thought 2006 pit problems were going to bite Danny-boy again, but a fast car and Weldon's aggressiveness in traffic prevailed. Ninth to first in 11 laps was very impressive. The downside of the weekend was the severe leg injuries suffered by Ganassi's rookie Indy Pro Series driver, Argentinian Pablo Perez. Godspeed and get well soon.

I must say I was not very impressed by the IRL's new wing rule. If it was supposed to pack up the field for closer racing, it didn't appear to be working, until late in the race once everyone had a chance to make adjustments following the Jeff Simmons crash. I'd say it's debatable whether the wing had any effect at all. I don't think anyone wants to see the pack racing the way it was in Atlanta a few years ago, but there definitely needs to be more of the side by side action the IRL has become famous for on the mile-and-a-half tracks.

Now it's on to St. Pete. Don't expect Marco to have a bad handling car this weekend folks! And I doubt Weldon will run into anyone under yellow this year. Hopefully Sarah Fisher and AJ IV will be able to adapt and not effect the outcome. Welcome back Sarah BTW. It's good to see you on track again.

Jay
Posted by Jay Alley at 8:21 PM No comments: 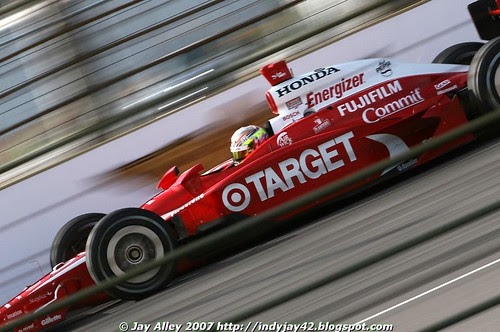 IRL Indy Racing League - Real Racin'
Originally uploaded by indyjay42.
Winter is finally over and the real racing season begins this weekend at Homestead when the Indy Racing League takes the fastest show on wheels to the banked oval in South Florida. Some folks say rubbin' is racin' but I say it ain't - especially in the IRL. Just ask Kenny Brack. You won't find any better, closer, wheel to wheel excitement than at an IRL event. Get out and see for yourself. Television does not do justice to the awesome speed and competitiveness of this series.

And since we're racing at Homestead, that means the opening of the Indianapolis Motor Speedway isn't far off. By the time the teams get to Indy, we should know pretty well who the title contenders are going to be, but you can bet Penske, Ganassi and Andretti-Green will be at the point of the field in every race. Now there are three women in the series as well so ladies grab your Danika gear and get to the racetrack. My personal favorite to win the season title is Sam Hornish Jr. of course but Marco Andretti will probably do it this year. He's fast and fearless and he needs a title before Honda will get him onto an F1 seat.

I was at the ethanol test at the Speedway last fall where this shot of Weldon in the south chute was taken and you will notice a distinctive sweet smell to the IRL exhaust this year as the series goes to 100% ethanol fuel. I used to say there's nothing better than the smell of methanol in the morning but now I will have to amend that.

As the commercial for Indiana Beach Amusement Park goes, "There's more than corn in Indiana." But nothing has ever smelled sweeter at the track.

Except maybe a stack of hot tires after a mid race pit stop. Go fast. Turn left. Bring it home safely.
Posted by Jay Alley at 12:44 PM No comments: 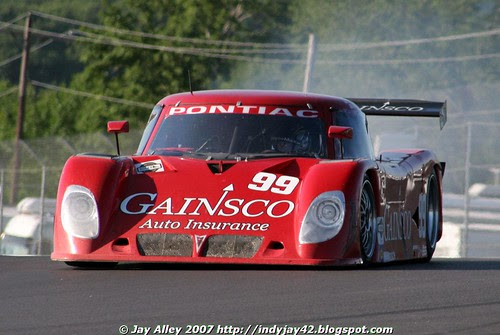 Heritage Christian Girls Repeat as Class 2A BAsketball Champs
Originally uploaded by indyjay42.
With super sophomore Kelly Faris displaying her usual all-around brilliance, the Eagles claimed their second consecutive Class 2A basketball state title this past Saturday. With her leadership and the other young players on that team, it's conceivable they could win the next two also and make Indiana high school basketball history. I had the pleasure of seeing Heritage play a few times this season and it is clear that Kelly could score a lot more points than she does. In fact, I think she could score anytime she wants to. But her team is so disciplined and balanced that she knows she does not need to do that for them to win. It looks to me like the Indiana Miss Basketball race is shaping up between Kelly and fellow sophomore Skylar Diggins of South Bend Washington for 2009 and it will be fun to see how these ladies perform the next two seasons. Unfortunately, a dream matchup between their teams can't occur in the tourney under the multi-class format and that is really too

bad for girls basketball fans in the hoosier state.

Jay
Posted by Jay Alley at 4:53 PM No comments:

Brebeuf Jesuit - Indiana 3A Girls Basketball Champs
Originally uploaded by indyjay42.
Congratulations to Ta'Shia Phillips and her Brebeuf Braves' teammates for winning the Class 3A title in girls high school basketball this past weekend. Her performance carried the team until late in the game when others stepped up. She was just unstoppable with her size. She is not the typical tall girls basketball player either - tall and skinny; she has size and takes up space in the lane with strength to spare. She should be a dominant force in women's college basketball wherever she decides to play. There probably has never been a player like her in Indiana girls high school basketball and the Brebeuf game plan was well executed throughout. Good job ladies.

Ta'Shia gets my vote for Miss Basketball this year and should be the top player on the Indiana All Stars. She has the capability to dominate the game on both ends of the court and I doubt there's another high school girl in Indiana or Kentucky who can match her skills, size and strength. Looks like an Indiana sweep is in the offing for this June. Get the brooms out folks.

Jay
Posted by Jay Alley at 4:44 PM No comments:

I remember excitedly watching the Ganassi press conference last summer when it was announced that JPM was coming back to the USA to race stock cars. For all the hoo-ha about "steep learning curve" I hope the bump and run in Mexico City taught those taxicab folks a thing or two about JPM's car control and desire to win. He was simply awesome in 2000 winning the Indy 500 and I have never seen anyone stick a car in turn 3 the way he did to run away with the show - and I was pulling for Buddy Lazier that year! And Juan did it as a rookie. You know I've said it here before - anyone that runs Indy is going to get my support, and if Tony Stewart can't win, then I'm pulling for JPM to smoke them and win Rookie of the Year. I think he may win as many as 5 races this season in Nextel Cup.

I think perhaps the folks that have the steep learning curve is the team at Ganassi Racing as Juan cannot be a savior if the team doesn't put a good machine in his hands. Look at the last few years - what has Ganassi done? Not much. Juan can overcome a lot with his innate skills but the crew has to do their work too. Can't wait to see him at Bristol.

Can't say I'm surprised by Chip's reaction to the win either. He's got a major investment to recoup and I'll bet Havoline sold a lot of oil in Mexico today. Too bad for Scott Pruett though - he's been a favorite of mine too since he mortgaged everything he owned to race Indy Cars and out-dueled Al Unser Jr. in the '89 Michigan 500 with a high side pass on the last lap to win. I don't blame Scott for being pissed off, but he could have given Juan a little room too as he had the inside line for the next corner and might have been able to hold him off for another lap or so. But Juan was going to get him - no doubt about that. It doesn't do any good to whine once the checkers fly.

Jay
Posted by Jay Alley at 4:26 PM No comments:

Tony Stewart Fans Unite
Originally uploaded by indyjay42.
Tony Stewart still seems to be the one NASCAR star that fans either love or hate. Personally, I love him and have been a fan for years, simply because he drives the wheels off of anything he races and doesn't take second place lightly. After all, I heard him say once that "Second Place is the first loser." Go to http://www.flickr.com/photos/indyjay42/ for some vintage Tony pix in dirt cars and at Indy.

My hope is that when Tony has had enough of WW-Nascar, he will come back to win the Indy 500. Other than perhaps LeMans, it's just about the only major race he hasn't won and I know Indy is still a sore spot for him. Too bad daylight savings time has robbed him of the opportunity to do the double with Charlotte. Do you remember the day he ran 1096 miles? I sure do. No one else could do that today, especially not most of the politically correct guys wheeling the taxicabs. Maybe Honda will follow Toyota into Nascar and then Tony can get a plum ride in the 500 and the 600 - no more sponsor conflicts like a couple of years ago when he showed up on Bump Day and toyed with the idea of jumping in one Of AJ Foyt's Toyota-powered cars. Great show that day for Tony Stewart fans like me.

Give 'em hell Tony. Say what you want about him, but he's a racer's racer and he's still the same guy who used to wax them at IRP, DuQuoin and the Indiana State Fairgrounds.