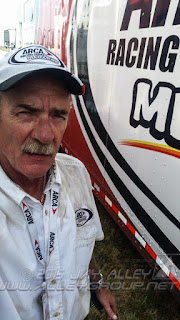 Thank God this year is almost over. Lots of people create year end Top 10 lists or propose New Year's resolutions, but I plan to do neither with this post. I simply want to thank everyone I've worked with this year in motorsports. I apologize in advance if I leave out some well deserving folks who have helped me along the way in 2015 as there are so many people I'd like to recognize individually.

I have to start with all the people at the ARCA Racing Series Presented by Menards. George Mergen moved on near the end of the season but he was my "boss" at most of the 14 races I worked this season for the series. Next year will be different without George at the racetrack and I am indebted to him for the opportunity to support the series, its teams and drivers through my photography. I have put together a video that I is included at the end of this post which condenses the 14 race events (plus the season ending banquet) into a little more than six minutes. You may notice how the images often seem to fly by, which I did intentionally as that's how this season went as well. Mark Gundrum, Don Radebaugh, Larry Mauter, Doug Donnelly, and so many others at ARCA have had a hand in what I did for the series this year and I had an absolute blast traveling, shooting the races and getting to know the drivers, teams and their public relations people. I can't wait to get started in 2016 but my first race for the series won't be until April at Nashville.

I also am grateful to know and work with Eric Gilbert and Rainier Earhart at one of the coolest racing websites on the planet, www,motorsport.com. The site keeps growing into a worldwide phenomenon and I am fortunate to be a contributor. I got to work the Grand Prix of Indianapolis and the 99th Indy 500 last May for the site and  I am really excited to do the same again in 2016 for the 100th Indy 500 at racing's hallowed ground, the Indianapolis Motor Speedway. I would love to do some other races for the site, most notably LeMans someday, but my ARCA commitments may make that impossible for awhile. I do have my passport ready just in case.

Even though I was only able to work a single race for Associated Press this year, at Atlanta for the NASCAR weekend at the end of February, I appreciate my friends there who have given me chances to do what I love. John Bazemore and Mike Stewart in Atlanta, Brynn Anderson - who I hope to finally meet at Talladega in 2016 - and John Raoux at Daytona, are all people I love working with. I really want to shoot another Rolex 24 Hours at Daytona someday, and get back there for the Daytona 500 like I did in 2014, but it doesn't look like that will be possible in 2016 due to limited leave time available from my real job as a teacher. Time will tell what I will be able to do for AP and I have to admit I am a little jealous of my friends there who are out shooting college football bowl games this New Year's holiday weekend. I would love the chance to do that someday too!

With 2015 in the rear view mirror, I am excited to look ahead and make plans for 2016. Hopefully my family will be able to wrap up my Mom's estate after her death this past July and I know I will be on the road a lot this year - probably just not to Akron so much anymore where she lived. I think of her all the time and I know her memory will come up often when I travel to races since I would always call her on the long road trips to pass the time and share the passion for racing that we had in common. It looks like I will be doing 16 or ARCA's 20 races for 2016, plus the month of May at Indianapolis for motorsport.com, so the new year promises to be very busy indeed.

Finally, I need to recognize the passing of a longtime friend and great photographer, Glenn Smith, in October this year. He helped introduce me to the folks at AP and for that I am forever in his debt. I think of him and the late Dave Martin every time I shoot a race, and ask myself, what they would do to make some pictures. I follow in their tire tracks and hope my work does their memories justice.

Until next time, please enjoy my video and turn up the volume! See you at a racetrack somewhere soon.
Posted by Jay Alley at 8:49 AM 1 comment: