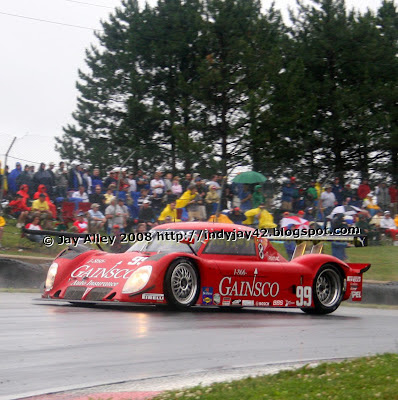 Before I left for Mid Ohio, I was hoping for a little rain to make things interesting. What we got was a deluge on Saturday and only slightly less intense rain on Sunday with a bonus of lightning. And the Gainsco bunch made it through all the carnage to blast from third to first in the last five minutes of the main Rolex Series event on Saturday to pass the Rum Bum team which was just hanging on with worn rain tires and couldn't hold Gurney and Fogarty back.
I had a great weekend and keeping the camera gear dry turned out to be the greatest challenge of the weekend. Everyone needs to go to Mid Ohio for a race weekend. I probably walked five miles over the two days I was there, but then I'm half nuts and tried to cover the whole track by myself. Or you can camp under the trees and just watch the cars go by if you choose. Standing next to a 15 foot high metal catch fence under tall trees in a lightning storm wasn't quite what I had in mind for the weekend, but then I was there at least. Thanks to Don Hamilton and American Motor Journal again. I had a bear of an editing job to do for them, sorting through over 1200 images to send them 20 or so from each race on the weekend. Whew!
Click on the following photo to see another collection from the weekend. See you there next month for the ALMS and IRL weekend. It should be awesome. Maybe it will rain then too!

Online Again: Off to Mid Ohio For Rolex Action 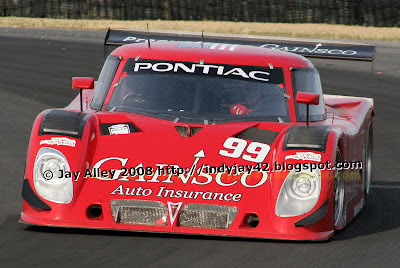 After a hectic couple of weeks without internet access while moving into a new home, I am back online again at last and am making final preparations to hit the road for the Mid Ohio Sports Car Course and the Rolex Grand Am Series event this weekend. These pix are from the 2007 event and I anticipate that this year's race should be much more competitive as the big cars ran solo last year and the Gainsco team led by Alex Gurney ran away and hid for most of the event. Saturday's feature should be much more competitive with many teams flexing their new bodywork and getting into mid-season form. I'll be back again next month for the American LeMans and Indycar Series weekend too. 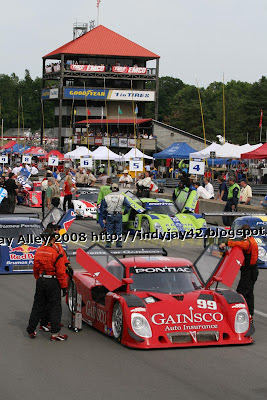 This is a track I started going to back in 1982 and it's one of the most beautiful natural terrain road courses in the United States. Just a few hours from Indy, it's hard not to go when something's going on at Mid Ohio. I love it even more after having the chance to drive the track for two days as a student in the Mid Ohio School of Performance Driving. I highly recommend it to anyone who has the need for speed. You will gain a whole new appreciation for what these guys do week in and week out. It was certainly the fastest I've ever driven and I can't wait to do it again someday. In the meantime, I'll stick to photography for American Motor Journal and enjoy watching the sports car experts finesse this place Saturday and Sunday.

I hope to post from the media center at the track this weekend and am raring to go racing again. It seems like forever since the Indy 500 and I am itching to get back to a race track. But I've still got a life to live and work to do so until I get to Lexington Saturday morning, be safe and I hope you'll come back soon! 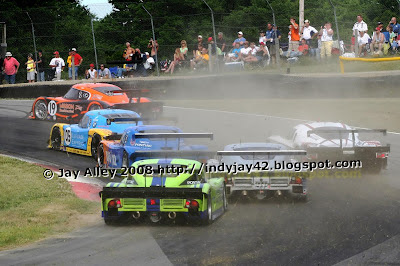 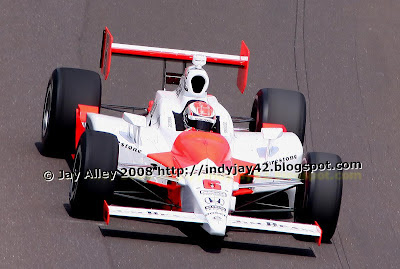 Back to Briscoe: redemption has never been sweeter than this! For a guy who wadded up lots of cars for Ganassi a couple of years ago trying to amke up for an underpowered Toyota powerplant, to winning ALMS races in Penske's Porsche Spyder last season to an Indycar win now is quite the journey. Well done Ryan!
Posted by Jay Alley at 10:03 PM No comments: Even though much of the jabber since the Indy 500 has focused on Ryan Briscoe and Danica Patrick's tangle in pitlane, Indycar's young guns stole the show in qualifying for today's 225 lap race on the Milwaukee Mile. Outside of Indy, State Fair Park in Milwaukee has the longest tradition of running Indycars of anywhere. Wisconsin's famous flat track should be especially challenging with 26 cars taking the green flag. There should be some dicey moments throughout the 225 laps and I would still expect one of the Indycar Series regulars to take the checkers. With Marco Andretti and Graham Rahal leading the way, the tussle into Turn 1 should be a sight to see. Rahal's front row starting spot is impressive but not altogether surprising to me, since the Newman Haas Lanigan team has experience here from CART and Champ Car, even though these are different cars than what they are used to. Qualifying is one thing but racing is another as we saw at Indy, so the transition teams are still going find tough sledding adjusting to conditions during the race.

Bravery and youth can make up for poor handling at times so Rahal should still show well. Marco must overcome the Andretti exuberance and apparent family tendency to run cars into the ground or take unwarranted chances. We'll see how he handles lapped traffic if he can grab the lead early on. And the lappers should be encountered within the first 10 laps or so. 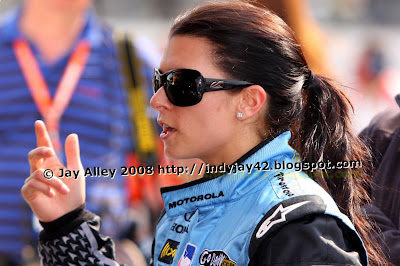 Danica didn't show well in qualifying although she has run well here before. Her run-in with Dan Wheldon will be shown over and over today but it's still good for the series. I'm thinking Scott Dixon is the man to beat however, and I doubt that Wheldon's poor race at Indy with a malfunctioning car will be repeated here. Watch for Kanaan to charge and Helio will be one to watch as well, especially since the Penske bunch has had its troubles at Milwaukee in the past. Remember the collapsing rear wings not that long ago? It will be fun to watch as these cars on short tracks are a site to behold, and the wheel to wheel battles should be intense since aero issues are reduced and increased levels of downforce translate into great cornering grip. Being out front won't be as important as at Indy. This is where the phrase "Go fast. Turn Left" takes on new meaning.

I wish I could be there.