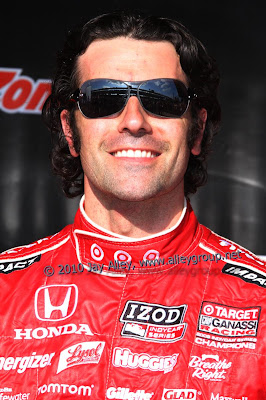 Dario Franchitti has kicked off the 2011 IZOD Indycar season with a dominating win at St. Petersburg, leaving the first lap carnage behind him and staking an early claim to the season points title. As my predicted season title winner for 2011, I was glad to see Dario jump out ahead in the standings. I'm sure the other teams in INDYCAR are not near as happy however, most notably Andretti Autosport after Marco Andretti ended up on his head in the first turn first lap melee, and teammates Mike Conway (immediately) and Ryan Hunter-Reay (later) were eliminated in the mess that Marco blamed on Helio Castroneves.

The double file restarts were a source of contention in their first implementation at an INDYCAR race. Slower speeds coming to the green flag on the start and every restart caught some drivers out at St. Pete, but I am sure they will be able to adjust for the next road races, beginning this weekend at Barber Motorsports Park in Alabama. Cold tires and brakes are part of the equation, but with INDYCAR fields being so tightly bunched and competitive, drivers are looking to make up places at every opportunity. With the gap between pole and 25th on the grid roughly 1.86 seconds, it was predictable that the first corner was going to be a problem.

Other than physically being at a race, I had the most fun watching the St. Pete event and couch racing while watching the ABC telecast and following everyone's comments on Twitter, adding a few of my own along the way. I did almost the same thing on Saturday but with the disappointing discontinuance of live streaming video on Indycar.com, I had to rely on Twitter for my qualifying fix. It was marginally better to listen to the radio broadcast online Sunday morning for the Indy Lights race. I'm sure the same issue exists for all media outlets with the urgency for instant communication that exists today - how to provide meaningful content without giving away the farm.

One of the reasons I created a Twitter account last fall was to engage in the wave of urgency that media outlets, race promoters, drivers and others all seem to be riding. The publication I have been shooting for since 2006, American Motor Journal, is about to unveil a new website to which I will contribute from all the races I shoot once again this season. I am hoping that Twitter feeds can be a part of that site's evolution. My next race event will be at Talladega in two weeks for Associated Press. My plans a year ago were to be at Long Beach for the INDYCAR weekend but that didn't pan out this time so I will be driving south once again as I did in February, but only going about half the distance as Daytona. I will be blogging, shooting the ARCA, Nationwide and Sprint Cup races, and tweeting like crazy throughout the whole Talladega road trip weekend. Talladega is another bucket list racetrack for me to check off, and I'm grateful for the opportunity to shoot for AP down there. See you at the track!