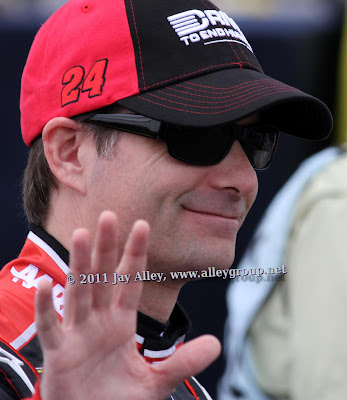 After a record setting Nationwide Series race yesterday at Talladega Superspeedway, 6-time winner Jeff Gordon is in the catbird's seat to lead the field to the green flag in today's Aaron's 499. Gordon starts next to Hendrick teammate Jimmy Johnson with another Hendrick mate, Mark Martin, right behind him. With 56 lead changes yesterday among 18 drivers, fans can expect more of the same today, as well as at least one green-white-checker finish. This photo of Jeff was taken right after his pole winning run Saturday morning once he climbed out of his car and finished media interviews behind pit road.

I look forward to an exciting day today which has dawned bright, clear and crisp. I was up early and left the campsite to come into the media center to work and be available for the mandatory 8:30 photo meeting. The timing of the meeting is better than at some races where these photo meetings have been held as early as 7 a.m. The tower I shot from yesterday at the beginning of the back stretch may not be available today, as the FOX cameraman setting up yesterday told us that no one else would be allowed in that tower during today's Sprint Cup race. No one is here from Associated Press yet so I am not sure where they will want me to shoot today. I'm happy to be here and if I have to shoot through fence then so be it: I did it at Indy in Turn 2 the whole month of May in 2006 since this shouldn't be that much different, although I never like to deal with restrictions like that as there is inevitably some degradation of image quality.

This has been a very interesting trip so far, for a variety of reasons, and I am amazed by the number of motor homes and campers both inside and outside the track. With the lap length slightly longer than Indianapolis, the facility is simply huge so I did a fair amount of walking yesterday to get to my shooting location and find my way around. Today will probably bring more of the same as there does not appear to be a direct way to get from anywhere to anywhere else. I need the exercise anyway and having been able to shoot both Daytona and Talladega in the same season has been simply awesome. I have to thank Associated Press Photos for that. I hope I shoot something that sells today but at any rate, I will shoot a few hundred images and do what I always do: bring pictures home. Just be ready. More later!