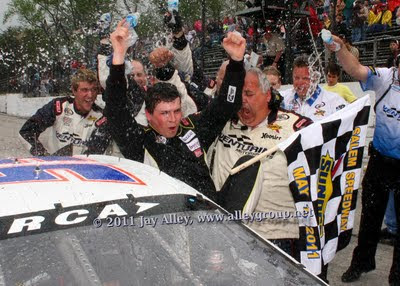 Newcomer Brennan Poole took his Venturini Motorsports Chevrolet to victory at Salem Speedway today after a typically wild and woolly Salem ARCA event. On a damp and overcast day that started out looking like the race would be washed out, in true Salem fashion the track got dried and the 200 lap race was run into extra time with Poole surviving and driving away from Ty Dillon and Frank Kimmel after a late green-white-checker finish. There was the usual beating and banging on the bumpy old Salem asphalt and competitors frequently found each other or the wall during the race. The young guns prevailed once again however and extended the winless streak of local favorite and 9-time ARCA champion Kimmel.

Lots of damaged cars were tooling around the track by the end of the event but that is also not unusual at Salem. Today's conditions were very reminiscent of this race three years ago when rain and mist ruled the early part of the day but they got the show in. Kudos to ARCA and the Salem track officials for getting it done today. I don't think the ARCA series gets the respect it deserves from a lot of folks but it does serve a valuable purpose in stock car racing: giving valuable experience to the young, up and coming drivers, crew members and others who seek to make a living from what is generally an unforgiving sport.

You would be hard pressed to find a more accessible bunch of drivers anywhere as they seem to happily endure authograph sessions with a smile and always manage to add a bit of freindly banter. When my assistant and I were going through the autograph line while the track drying work was going on, we talked to both Brennan Poole and Venturini teammate Max Gresham. I told Brennan that he was with a great team and reminded him that Steve Arpin had won at Salem for them in the past and that maybe today would be his day. Sure enough it was. Three years ago during a similar rain delay at Salem, we got to have a nice long talk with Justin Allgaier after the driver's meeting while watching the track drying work together. Look where he is today. These young guys are on their way up too, so get out to an ARCA race when they come to town. This is the only series that runs short and long ovals, dirt tracks and road courses, plus you'll enjoy a great day at the racetrack. See you there! Until then, here's a slideshow of some of my photography from today's race.