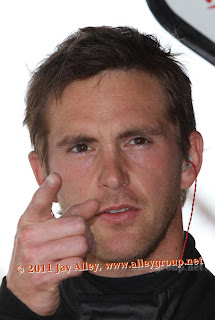 An exciting crop of Indy 500 newcomers, led by former F1, NASCAR and ARCA driver Scott Speed,  took part in the mandatory Rookie Orientation Program (ROP) yesterday at the Indianapolis Motor Speedway in a session which was closed to the general public. Others participating included last year's Firestone Indy Lights pole sitter for Indy's Freedom 100, Pippa Mann for Conquest Racing, JR Hildebrand for Panther Racing, James Hinchcliffe for Newman Haas, Englishman James Jakes for Dale Coyne Racing, the first-ever driver of Chinese descent Ho-Pin Tung, and Graham Rahal's teammate at the second Ganassi Racing team Charlie Kimball. Jay Howard returns this year to make another attempt at the 500 after turning laps as Sarah Fisher's teammate in 2010 but being unable to get up to speed. Speaking of "Speed", Scott's ride with Jay Penske's Dragon Racing team came together only recently and Speed has talked openly about competing for the $5 million bonus in the season ending race at Las Vegas this October.
With 40 confirmed car-driver combinations, only one week of practice and just two days to qualify, pressure will be intense on every team to get their drivers in the show. No doubt there will be some who can't handle it and find the fence, others will never quite get a handle on their equipment, and still others who will simply run out of talent by the time the 6:00 gun fires on Bump Day May 22nd when the Field of 33 is finally set. And yet as the Indy 500 continues its celebration of the 100th Anniversary of the very first 500 won by Ray Harroun, 2011 will pass without anyone named "Smith" ever having raced at Indy. Believe it or not, there has been an Alley who raced at Indianapolis - Tom, not Gasoline. You can look it up.
I'll be running around like a mad photographer this weekend trying to make sure I get photos of every driver entered (and some just walking around with their helmet bags hoping for a ride). As the week goes on, I will also grab photos of every car that hits the track so I can do my annual slideshow pairing drivers with their machines once the field has been set. Indy scenes, people and other unique aspects of the Greatest Spectacle in Racing will also be captured through my lenses to bring my viewpoint on "The Most Important Race in History" to the internet through this blog, Twitter and the new American Motor Journal.
Posted by Jay Alley at 4:29 PM