This really hurts and writing about it hurts even worse. But I have to write - I need to. What I feel surely pales in comparison to what the family and close friends of Dan Wheldon must be feeling today after he lost his life October 16, 2011 in a horrific crash at Las Vegas Motor Speedway in the final IZOD Indycar Series race of the season.

Just two weeks after one of Indycar's best moments in recent years at the Kentucky 300 at Kentucky Speedway - when Ed Carpenter won his first race in a photo finish, and got Sarah Fisher her first win in the process - Indycar experienced its darkest day at Las Vegas yesterday. Two-time and defending Indy 500 winner and 2005 Indycar Champion succumbed to injuries sustained in a 15 car accident which many describe as one of the worst in Indycar history. What began as a day of promise with Danny chasing a $5 million bonus, Dario Franchitti fighting it out for the season championship with Will Power, and the Rookie of Year title up for grabs between James Hinchliffe and J. R. Hildebrand, ended with the Indycar community grieving the loss of one of its brightest stars. A slow parade of five laps with the remaining 19 cars from the entry list in three-wide formation was completed to honor their fallen comrade Wheldon as the race was stopped and never restarted. 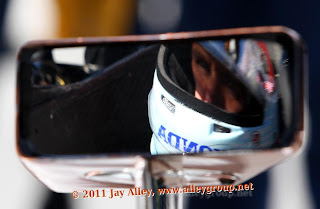 Two weeks ago I was at Kentucky as a photographer and kept close tabs on Wheldon's warmup race as a substitute for Alex Tagliani on the Sam Schmidt Motorsports team. Many pictures from that event are included in the slideshow which accompanies this post and you could tell from Dan's expressions throughout the weekend that he was serious about this effort and concentrating on getting a win, either at Kentucky or at Las Vegas. One of the last photos I took on the pre-race grid at Kentucky was a mirror shot of Dan taken while I knelt down next to the right rear tire of his #77 machine. He had to start near the back due to problems in tech inspection which prevented him from qualifying the day before. During qualifying itself, Dan had been relegated to intently watching all the other teams qualify from the Schmidt team's pit box, and the photo above was taken during that time.

I hurt for Sam Schmidt as well, as his Indy Lights team had lost team manager Chris Griffis not long before Kentucky to a sudden death after playing basketball. The team was clearly emotional when Josef Newgarden accepted the Indy Lights season championship honors at Kentucky. Now this tragedy involving Danny - I'm sure it must almost be too much for Sam to bear as he had already commented that he thought about getting out of racing following Griffis' death.

My heart aches for guys like Dario, a former teammate of Danny's, who was deprived a proper championship celebration at Las Vegas for his 2011 season and was reduced to tears as the news was confirmed that Dan had died in the accident. When the #77 lit up the top of the scoring pylon at Las Vegas and the best in the Indycar business were openly weeping and grieving, this new sudden loss must have devastated Sam and his team as they had lost their friend, colleague and competitor. No one was left unaffected as the honor laps were concluded behind the Honda pace car, and teams lined the pit road to pay tribute to Dan, whose brilliant smile we shall never see in the Indycar paddock again..

I know my friends in the media who worked the race are hurting too. As fans and photographers, we do this work for the love of the sport and no one wants photos of a fatal accident. We want, and get accustomed to seeing, spectacular crashes where the driver walks away or at worst has to spend some sheet time mending injuries before returning to the cockpit. Stories like this are legion and drivers like Will Power, Davey Hamilton, Kenny Breck, Mike Conway and others constantly prove the point:  they live to race and as long as they live, they have the will to race. That's what they do. They have to. By the same token, we shoot racing for many of the same reasons and joke about having the "need for speed" which only a racing fix can satisfy. Historically, the more spectacular the crash, the better it is for the driver in an Indycar, as energy dissipates through the destruction of the car which otherwise would transfer to the driver. But that's not what happened at Las Vegas October 16th unfortunately, as Dan's luck ran out and physics conspired against him in ultimate fashion. For him, there will be no heroic comeback story - only stories like this one for media and fans to pass along in his memory.

It hurts to know that Danny will no longer be pulling pranks on teammates, or hopping out of a wrecked car to wave to the fans as he did in 2003 in Turn 3 at Indy when he got upside down. It hurts to know we won't hear the ribbing he took a couple of years ago for his new dental work, or hear him talk about being a "fashionista" in reference to his William Rast sponsorship this past May. We have to remember these things though. Like Dan and Scott Dixon hugging on Pole Day at Indy in 2008. Danny, Helio and Dixon joking and laughing in the media center at Nashville in 2008 after the podium ceremonies got moved indoors when rain cut the race short. Or following @danwheldon on Twitter and laughing like crazy at his banter with fellow drivers and Indycar fans. While I can't say that Dan was a friend of mine, I feel like I knew him well, having been in close proximity working numerous Indycar races the last several years. When he would respond to my offering a passing "hello" or congratulatory comment, that was enough for me to feel he knew me even if he didn't know my name. He made everyone feel that way. Even the good memories have a sting now, knowing that we won't have any more to make with Dan. And that really hurts.

Race drivers are different that the rest of us. They have no fear. They live life on the edge and love it. Their hand-eye coordination and reaction time are almost superhuman. Yet in an instant it can all be taken away through no fault of their own. Getting used to seeing drivers walk away after cheating the grim reaper makes losing Danny now that much tougher today. I'm sure the cries of "bloodsport" will be heard after this weekend but Indycar racing will survive. It's a damn shame that Dan Wheldon won't be with us to help lead the series' return to glory. The promise of new equipment in 2012 - for which Dan was the primary test driver, the ever improving driver lineup and fans loyal to the core will continue to push Indycar forward as America's highest form of open wheel motorsport. Dan's spirit and desire will continue to inspire those who follow. I expect to see his smiling face and the Borg Warner trophy on my 2012 Indy 500 tickets and will wear my William Rast Racing t-shirt and hat at future races I shoot, in silent homage to Dan Wheldon.

In some small way, I hope these things and my photos can contribute to honoring Danny's legacy. We must not forget his contributions to Indycar racing, the achievements of his career at Indianapolis and elsewhere, and his growth as a man while navigating the high speed lane in Indycars. He came to us full of exuberance and youthful pranksterism, and leaves us now all to soon as a father, husband and friend. I pray that Dan's wife, his family, two young sons, and so many others in the Indycar community will somehow find peace in these dark days. In grieving Dan's departure, Godspeed to all and may God bless us and protect us under the shadow of His wings. We miss you so much already Dan.
Posted by Jay Alley at 9:36 PM