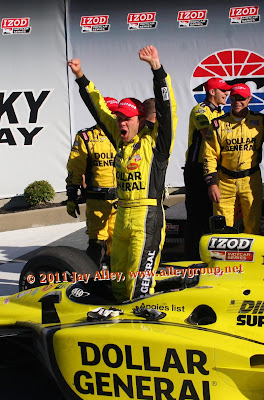 One of the most likable Indycar drivers finally won a race for the woman owner who for years was the most popular driver in the IZOD Indycar Series, Sarah Fisher. It was also the first win for Sarah Fisher Racing. It's not often that you see tears of join in an Indycar Victory Lane, but this win was special for a bunch of reasons. Sarah has had to step out of the cockpit this year and into motherhood while managing the team's financial future which has depended on Dollar General to run a limited Indycar schedule. Ed finally got past P2 this year after consecutive runner up finishes at Kentucky Speedway. Two years ago he lost a photo finish to Ryan Briscoe. Today he won in almost the same fashion dueling Dario Franchitti wheel to wheel from the last restart to the finish. Scott Dixon backed up his Target teammate Dario and took third. Both Dario and Scottie D seemed genuinely happy for Ed in Victory Lane, and the number of offspring (babies and little kids) running around will probably never be topped in the Winner's Circle.

For the light crowd which attended today's race, it was a fantastic finish on an absolutely gorgeous fall day with not a cloud in the sky all day long. The races at Kentucky are typically fast and furious and this one was no different. There were incidents galore in pit lane and wheel to wheel packs of three and sometimes four wide racing like there was no tomorrow. For Will Power, he is happy there is a tomorrow and one final race in Las Vegas. He got clipped in the pits by Anna Beatriz and dropped like a stone through the order. Perhaps that contributed to  the lighthearted mood displayed by Dario and Dixon afterwards as they knew they had made great strides in the season championship.

For the time being, these photos celebrate the Sarah Fisher Racing team and Ed Carpenter, who have not tasted victory before in Indycars and do the series proud with a heartwarming performance  which arguably could be the highlight of this season.