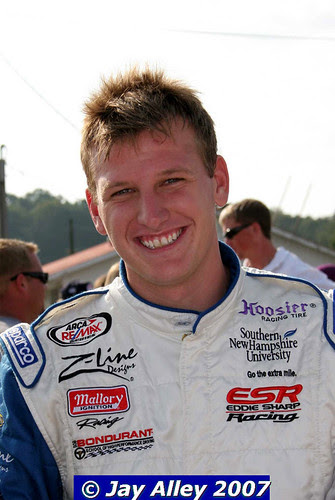 Michael McDowell, Eddie Sharp Racing, ARCA Star
Originally uploaded by indyjay42.
Here's a young driver to keep an eye on: Michael McDowell. He's running the full ARCA circuit in 2007 for Eddie Sharp Racing and has already had an impressive 10th place at the Daytona 200. My pix are from the Eddie Gilstrap Fall Classic at Salem (Indiana) Speedway in September 2006 where I first met him and had the pleasure of providing photos for his website, http://mmcdowell.com and other uses. He also ran the Rolex 24 Hours this year for Finlay Motorsports and helped the team to a 10th place finish in the top sports car prototype class. The team had all kinds of problems but had a strong driver lineup where Michael teamed up with Bobby Labonte, Michael Valiente and Rob Finlay. For a guy who came up through road racing to adapt to the ARCA stock cars on ovals as quickly as Michael has is very impressive and I would expect him to land a ride in Busch or Nextel Cup in the next year or so. He surely knows how to go fast, and he's proving he can turn left (as well as right).