Today We Race: Together At Last 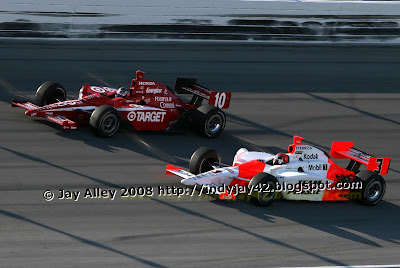 The opening of the Indianapolis Motor Speedway is now just 36 days away and the 500 itself will be run 57 days from now. As the countdown continues to arguably the most relevant Indy 500 in many years, today the best in American open wheel racing gather at Florida's Homestead Speedway. Time will tell if the historic reunification of the Indy Racing League and Champ Car brokered by Tony George will have staying power. But when I hear TG state that the 25/8 rule implemented in 1996 at Indy was a mistake, I have even greater hopes for the future of Indycars. In the modern era of blame and shame tactics, how often to you hear a highly visible leader admit they made a mistake? Its virtually unheard of. I hope the Champ Car fans will see this as an additional peacemaking gesture and show their true open wheel colors. Let's also hope the name "Indycar World Series" can be resurrected as Tony suggested. This time, it will really mean something.

So today we race. One series. Lots of newcomers to oval racing and much has already occurred in the last week that will shape the outcome of this race. Graham Rahal is out after crashing in testing, the team short on time and spares. Wheldon crashes during qualifying in the new 4-lap format. Vision Racing teammates Ed Carpenter and AJ Foyt IV will start second and third. But at the point is a man who should be no surprise to anyone: Scott Dixon. He could very well win tonight if he stays out front, as Scotty D knows how to run the huggy pole in these high downforce Dallaras better than about anyone. My pick is Helio, even though new teammate Ryan Briscoe outqualified him. With the new qualifying requirement, who knows who is really running on the edge and who is working on a balance for race day? Penske strategy will likely carry the day.

Seven of the former Champ Car drivers have been designated rookies for the year and that's probably a good thing with so many ovals on the schedule. But watch out for those guys at St. Pete next weekend, and at the Glen, Mid Ohio and Sonoma. Danica will finally win a race this year but she will not be able to match her teammates' speed on a regular basis, nor the racecraft of Tony Kanaan. Marco will probably take a road course win but let's hope he learns how to handle a loose race car on ovals or he will have plenty of DNF's just like last year. Will Power or Justin Wilson will probably win an oval race, maybe at Chicagoland Speedway, once they've got their oval legs and nothing to lose in the season finale. Wheldon can challenge for the season title if his crew corrects their pit and race tactic errors from last year, but crashing in qualifying doesn't bode well for Danny-boy. Methinks he may be trying too hard. Vision just might have it together to get someone in victory lane if Homestead qualifying is any indication. Bruno Junqueira knows the fast way at Indy so he could challenge for several wins this year if the team gives him the proper support; but I doubt it. It should be fun to watch.

My pick for the season title though is Helio Castroneves. I have had toruble being a Penske fan since his teams won Indy so often but I always liked Rick Mears and Sam Hornish, plus he's given Ryan Briscoe a new lease on his racing life with the ALMS Porsche ride and now a season seat in Indycars. Lord knows Helio has always been fast wherever he goes, and despite two Indy 500 wins, he's never been a season champion. Now it's his turn. Tony Kanaan will be right there with his childhood karting buddy, and Scott Dixon will certainly be in the mix as well.

So there you have it - one man's view. The usual suspects. A few surprises. All together now: let's go racing!
Posted by Jay Alley at 2:20 PM