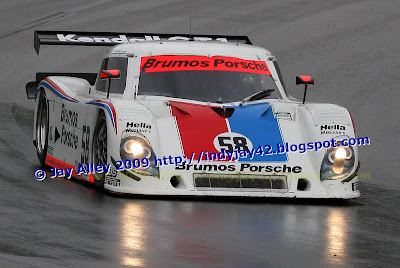 I haven't had much to say through the winter racing doldrums, but I saw history made today at Daytona and that means it's almost time for me to go racing too. David Donahue took the 24 Hours of Daytona by the scruff of the neck today, passing Juan Pablo Montoya with less than 40 minutes left to win over the almighty Ganassi team which had been seeking its third straight win. Historic for Brumos, which hadn't won in, well, forever. Historic for Donahue, winning 40 years after his famous father, the late Mark Donahue, won in similar fashion from pole. A final hour fight among four Daytona prototypes that were nose to tail after the final pit stops. A record number of laps for the race and a record number of cautions. This time, I was only couch racing from Indiana where it is cold and snowy but one day I will get to Daytona for the Rolex spectacle. The above pic is from last summer's rainy foray at Mid Ohio. Let's hope the Brumos team can get several more wins this year, and keep Ganassi, Penske and the other big name teams honest in Grand Am. I've already got my room booked for Mid Ohio this June and I can't wait to see these guys run.
By then I will have been to Salem for the April ARCA show, dealt with the month of May at Indy, and gone to Texas for the trucks and IRL. I can't wait for those events and much more this summer. Not that I am going to be setting any records personally, unless we're talking about the number of images I will probably shoot. It's incredible how fast a 4 gig memory card will fill up over a two day race weekend! And my thanks again go out to Don Hamilton's American Motor Journal publication who is helping to make it possible.
While my personal favorite is Indycar racing, I love the sports car scene as well. The names at Daytona this weekend remind me that the IRL will be on track soon, and the 24 hours was a tune-up for many of Indycar's best. Buddy Rice in the winning Brumos car. Defending IRL and Indy 500 Champ Scott Dixon teaming with Dario Franchitti (welcome back!) at Target Chip Ganassi this year. Ryan Briscoe - who may be running alongside Will Power while Helio gets his tax problems sorted out. Ryan Hunter Reay. Danica. Darren Manning.
It's really too bad what is happening with Helio. After another bridesmaid finish for the season title last year, I was looking forward to him running up front this year, as Helio has provided some of the IRL's best action the last couple of seasons. It's potentially a huge break for Power who was one of the most impressive of the transition team drivers in 2008. This year may be different, as the tax man wields a mighty hammer that could keep Helio off track for most if not all of the season. Too bad for the IRL. Helio and Danica are arguably the IRL's best known drivers, and I'm sure Penske saw this coming, but it might go to prove the old adage that any publicity is good publicity. My biggest question this year will be car counts due to the economy. If the IRL teams struggled to find funding when the economy was good, how are they going to manage now in a recession? The IRL is already taking this into account by dropping two practice days from Indy 500 preparations, and announcing that several race weekends will be reduced to two-day shows. That can't be a bad thing for the teams struggling to make ends meet.
This May will be 100 years since Carl Fisher and the boys held their first events at the crushed cinder oval at 16th & Georgetown - balloon races! The balloon folks will be back to kick off May this year in honor of the first century of existence at the greatest racetrack in the world, and by the time pole day rolls around on May 9th, answers should be in hand for how the season will shape up. I'll be back again soon to show what I see through the lens as my view from the racing road continues into its third year here on blogspot. Thanks for shopping! Y'all come back soon.
Posted by Jay Alley at 4:59 PM