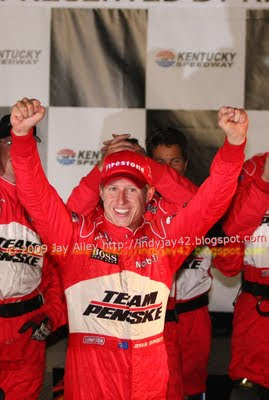 Of all people to be racing wheel to wheel for an Indycar Series win, I'm sure Ryan Briscoe would not have picked Ed Carpenter. But that was one helluva run by Carpenter and the changes made by the IRL brass seemed to have worked as there was lots of side by side racing throughout the field. Briscoe survived a brush with the wall and a persistently aggressive charge by Carpenter to snag the win in a near photo-finish. The margin was said to be 0.0016 seconds, the closest IRL finish ever at Kentucky, and the average speed was over 200 mph. The racing was mostly clean and green all night and the number of laps led by Carpenter tonight were probably more than the rest of his IRL career combined. He had the low line on Briscoe late and held his own for at least 10 laps wheel to wheel in a really spectacular display of driving. Perhaps the Vision Racing team is coming into its own now that Tony George is able to focus his attentions on what the team needs.
Standing in Victory Lane waiting for the ceremonies and the hat dancing to begin, a few sprinkles were felt and everyone really got lucky tonight. Briscoe has now taken the IRL season points lead heading to Mid Ohio next weekend, a track he won on last year. Early int he race, it looked like the Target-Penske juggernaut was going to make the race another parade, but the push-to-pass technology and other aero changes combined to produce a very entertaining Indycar race.
The other news coming out of Kentucky this weeked was the 2010 IRL schedule, which features 17 races along with a couple notable additions and deletions. Gone are Richmond and Milwaukee. New are Brazil and Barber Motorsports Park in Alabama. It will be the first time in the IRL's history that there will be fewer oval races than road/street circuits and the league is entering into a crucial year. Unification came last year and the economy tanked this year, so next year could be critical to see how the IRL responds to new leadership and an expanded international presence. The usenet group folks still howl about how this looks a lot like CART or Champ Car, but it is the only major open wheel series running at a top level for American fans to see. Everyone knows I've been an IRL supporter from the beginning so I'm hopeful the current momentum can build. With the troubles that Sprint Cup is having, perhaps the timing is just right. We'll see.
Look for more soon on the American Motor Journal website.
Posted by Jay Alley at 10:37 PM