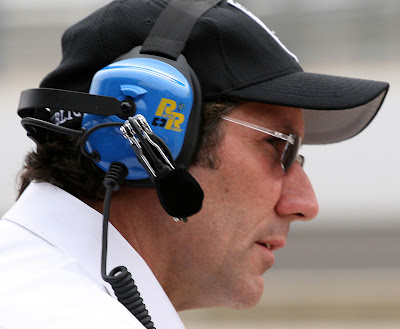 With the 2010 auto racing season beginning in earnest this weekend in Florida with the running of the Rolex 24 Hours of Daytona, it seems odd to me that the major story in big league auto racing recently comes from Indianapolis. In the completion of an apparent falling-out with family members, Tony George announced last week that he resigned from the board of the Hulman family business and now will be just an Indycar team owner. Even his Vision Racing team is said to be struggling for sponsorship dollars to stay afloat this season.

It's been a long hard fall for the man who has been demonized by many for his creation of the Indy Racing League in 1996. It's really too bad that he has now been sacked by his own family from any leadership roles at Indianapolis Motor Speedway, the IRL and now Hulman & Company. Meanwhile Jeff Belskus is said to be courting the CEO of Professional Bull Riders, Randy Bernard, as the next IRL leader. Excuse me, but what does bull riding have to do with 200 mph racing? With names like Zak Brown of Just Marketing International in the mix, how in the world can the Speedway's current leadership think a guy from the PBR will have an impact on the needs of the Indycar Series? The learning curve will be too steep in my opinion, and who among the IRL competitors is going to take Bernard seriously when it is decision time for the next chassis spec to be issued? All I can say is he better leave the tech stuff to Brian Barnhart and others, and get out there and beat the bushes for funding and promoting the series as it needs to be. Otherwise, his tenure will be as short as and IRL pitstop.

Which leaves me here in the cold and snow of the midwest instead of at Daytona where I should be, shooting the Rolex series this weekend. The Gainsco team is still probably the team to beat, although likely not this weekend, but probably for the series title, since NASCAR champ Jimmie Johsnon wadded up their 99 car in a practice wreck this morning. Tough break for IRL vet and team owner Jimmy Vasser who was also going to co-pilot the Gainsco entry. Chip Ganassi has loaded his team with IRL talent as champion Dario Franchitti and his IRL teammate Scott Dixon team with Juan Montoya - all Indy 500 winners! - and Jamie McMurray. Ryan Hunter-Reay is also entered so the open wheel racers will be well represented at Daytona. My guess is Helio couldn't make it since he's recently become a father and his girls probably need him at home for awhile.

I may not be the only one who has been effected by breathing too many methanol/ethanol fumes. Nelson Piquet Jr. to NASCAR? Are you serious? He should go run Salem too. Michael Schumacher un-retires to run F1 again, this time for Mercedes? Has he run out of money or just gotten bored? At 40 years of age and away from the sport for more than three years, his performance will be closely watched by all. Marty Reid and Scott Goodyear will return to the broadcast booth for ABC's IRL coverage and Eddie Cheever will be with them for Indy 500 coverage. Speaking of Eddie, I can't wait to see him at a race track this year and ask him what movie he and his son went to see at the Glendale Kerasotes theater last month. I think he was surprised that I recognized him as he was buying their drinks and popcorn. In the department of not really news: seating capacities at NASCAR tracks is being reduced due to lower demand. I guess that's one way to make the tracks look like they have bigger crowds. At least there won't be so many fans disguised as aluminum bleachers on TV this year.

The best news is that Dario was recognized as driver of the year for 2009 by the Auto Racing Writers and Broadcasters Association. He truly deserved it and adds the award to the one he won in 2007 after his previous IRL championship. Best wishes to all the IRL contingent this weekend, and I will see you soon. If you're looking for a good racing photographer this season, I know where you can find one.
Posted by Jay Alley at 7:30 AM