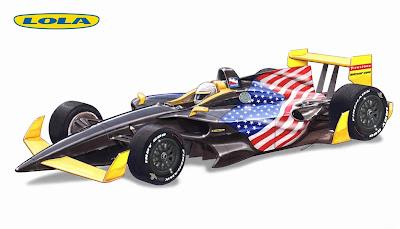 The final designer is now in the mix for the future of Indycars. The venerable brand Lola has submitted its concept drawings, and similar to Swift and Dallara, its design is evolutionary in contrast to the radical Deltawing. With four potential designs to choose from and a reported goal to make a decision by May 2010 for the 2012 season, the new brass at the Indy Racing League will surely have their hands full. How mush influence will Chip Ganassi have since the Deltawing concept comes from his shop? And will their be brand loyalty to Dallara since they have taken over the IRL chassis supplies since the G-Force went by the boards a couple of seasons ago? The IRL has never been at a more critical juncture in its history as the decisions made this year on the future chassis will set the table for at least the next five years. Then the engine manufacturers will know what they have to work with as well.
Personally, I like the Swift as it just sounds like it should be an Indycar. Lola has a vaunted history in Indycars and is currently involved in other top flight racing series as a chassis supplier so don't count them out. And if it is true that Dallara only sold nine (9) new cars in 2009 as I have heard, then whoever gets this deal stands to make some real money beginning in 2012, even with the cost reduction goals in place, since there will likely be a need for 50 or more new chassis to be cranked out in time for the 2012 Indianapolis 500. Stay tuned.
Posted by Jay Alley at 5:53 PM