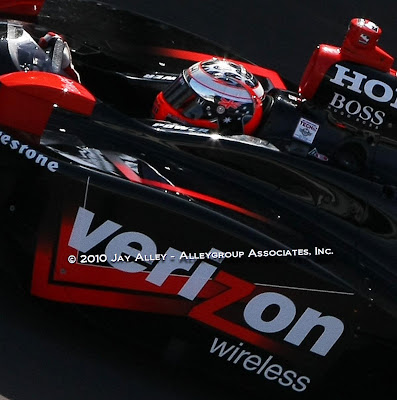 Australian Will Power continued his resurgence in Indycars with a second consecutive win to start the Indy Racing League season, the first IRL driver since Sam Hornish to do so. And this from a man who lay broken in a California hospital bed just a few months ago. Power displayed uncanny race savvy on the drying track and let the race come to him, leading half the race laps in the process. No one could be happier that the monsoon conditions washed this event from Sunday to Monday morning. With a road course at Barber Motorsports Park up next, followed by another street circuit race at Long Beach, Power could enter the ovals at Kansas and Indy as the driver to beat for the IZOD Indycar championship.
In the second straight highly enterntaining IRL road race, in one respect it is a shame that the event had to be run Monday morning and got shifted to ESPN2 from its original ABC time slot. After a 76% jump in television ratings for the first race of the 2010 season, I am sure the Indycar brass are wondering what might have been, as St. Pete was highly competitive from fourth place on back with heavyweights like Dario Franchitti charging back after a lap one spin on the damp track to take fifth, and media darling Danica Patrick getting a 7th from her 21st starting position. In the middle was Simona DeSilvestra with another strong run before getting punted and Scott Dixon making uncharacteristic mistakes to DNF against the wall after leading the race's early laps. Graham Rahal had a fantastic run into 9th for Sarah Fisher's "little team that could" and Justin Wilson continued his early season success with Dreyer & Reinbold, chasing Power home to take second. Power's Penske teammates Ryan Briscoe and Helio Castroneves trailed Wilson to the finish and gapped the drivers in fifth through tenth that swarmed around the St. Pete circuit snarling like a swarm of angry bees for position. Alex Tagliani had another impressive outing for his fledgling Fazzt team in sixth. It's clear that the first two races of 2010 have set the stage for perhaps one of the most hotly contested Indycar seasons in years.
Healthy car counts with 24 machines at each of the first two races bodes well for the series this year. The Indy 500 could have as many as 42 or 43 bonafide entries this year if reports around the circuit are accurate. John Andretti will likely run with cousin Michael's Andretti Autosport and Graham Rahal could be headed back to Newman Haas Lanigan, with Davey Hamilton, Paul Tracy, Townsend Bell, Tomas Scheckter, Jay Howard, AJ Foyt IV, Ed Carpenter, Ana Beatriz and Sebastien Saavedra said to be set for May's abbreviated schedule. Teams need to keep their equipment together over the next two raod races so that the Kansas tune-up for the 500 can help everyone get their oval legs under them heading to Indianapolis.
Pressure is on from sponsors for the IRL to deliver value this year, and no one knows that better than new IRL leader Randy Bernard. His appearance on SpeedTV's Wind Tunnel with Robin Miller last week was upbeat. I have surprised myself by beginning to warm up to Bernard filling this position, as he seems to be doing what all good leaders do: get good people involved and get their input. The formation of a committee to evaluate chassis options and provide recommendations is on the money, and recent reports indicate that 2011 may not be the drop dead date for a new car after all, especially if it means that teams have to spend more money when cash is already hard to come by. That realization is a good one in my book. Getting fan input is also a good idea, and I know I am not the only one who got the IRL survey via email about the chassis designs.
If the weather would just cooperate and fans could watch what the IRL is doing from week to week, there is an excellent opportunity to build significant momentum for May and the title chase. With more road courses than ovals on the schedule this season, one bad finish on either type of circuit could make or break a contender's opportunity. I for one can't wait to see what is next. While the IRL is at Barber, I will be at Salem for the ARCA race but rest assured I'll have something to say about both - thanks to my DISH Network DVR! See you at the track.
Posted by Jay Alley at 8:26 PM