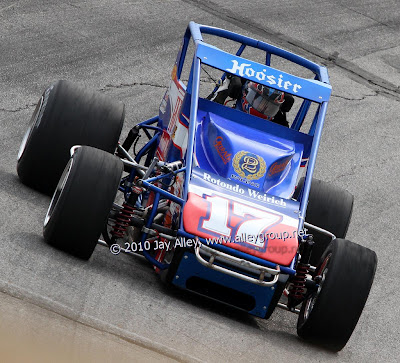 Shane Hmeil led flag to flag last Saturday night in the 50 lap USAC Sprint car feature at the rugged Salem Speedway half mile in southern Indiana. For a guy who has had his share of trouble, both in and out of a race car, he sure looked strong and was never seriously challenged for the lead. Tracy Hines fought his way to second place ahead of Bryan Clauson but was several car lengths back at the checkered flag. It was a steamy summer night for racing on the bumpy old asphalt for the Joe James/Pat O'Connor Memorial event, but the fans loved the USAC sprinters and were treated to a 30 lap feature from winged sprint cars as well, courtesy of the "Must See Racing" Extreme Sprint Car Series. It was my second trip to Salem this year and I plan to go back again next month when the ARCA series returns for its fall classic 200-lapper. Salem has a whole new look now with the new infield short track (complete with figure-8 crossover - all paved and race ready. The main track surface could sure use some new asphalt, but the bumps made for some spectacular showers of sparks as the sprinters bottomed out, especially going through Turn 3.
For this event, I traveled light to deal with the heat, and didn't even wear any earplugs during the race this time. I wanted to really hear the cars as well as feel them! I also got a chance to shoot from outside the wall at the exit of Turn 4 for the first time in all the years I've been going to Salem. Aside from getting showered with tire rubber and track debris, I absolutely loved the view and stayed there through the heat races for both series. The MSR cars were definitely faster on single lap times than the non-winged USAC sprinters, but Hmeil had the best line of the night in his winner's interview when he called the wings "a crutch". I prefer mine without wings, as the drivers are more visible and I think it takes more car control without all the downforce the wings provide. The winged guys definitely have more space to use for sponsor ads, and the MSR series has a lady racer named Sondi Eden who came home 5th in their feature not far behind winner Troy DeCaire. When I saw these cars run their demo at the April ARCA show, I put this race on my calendar as I was curious to see how they handled the high banks. The MSR bunch had the larger car count and raced clean and hard with no significant accidents, although I did hear some grumbling in the pit about a couple of driver's and the lines they were using. No rear view mirrors on sprint cars, ya know!
I'll be going to Winchester this weekend to see the USAC sprinters run again so I hope they can boost the entry list and put on another good show. See you there!
Posted by Jay Alley at 11:15 PM