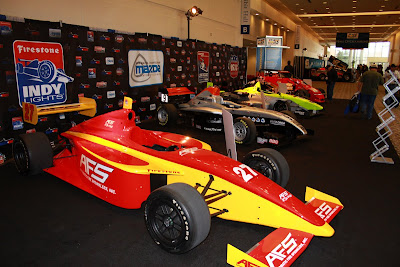 Motorsports companies from around the globe have converged on Indianapolis this week under the theme of "IMIS Means Business, Because Indy is Racing". If the Indianapolis Motor Speedway is the capital of auto racing, then this industry show is the capital annex as the sold out exhibit hall would indicate. I will be working the show and reporting from the media center today and tomorrow with news and photos of all that is going on. We are waiting right now for a press conference where news of the addition of ARCA stock cars to the O'Reilly Raceway Park schedule is to be announced. The ARCA series will be added to the ORP Kroger Speedfest race week leading up to the 2011 Brickyard 400 as part of the Thursday night activities that have historically involved the USAC Midget and Silver Crown Series. It will be the first time since 1985 that ARCA has raced at ORP and promises a great night of racing with this triple header.
Posted by Jay Alley at 9:55 AM