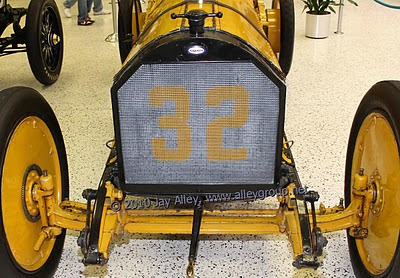 With the 2011 IZOD INDYCAR season about to commence in three days in St. Petersburg, Florida, the series embarks on a historic year that should be a battle for the ages among the top teams. This Sunday's race will also begin in earnest the countdown to the Indy 500 as well, which will be just 63 days away at that point. Followers of the series know that this will be the last year for the current car specification and that the 2011 Indy 500 is a celebration of 100 years of history at the Indianapolis Motor Speedway since Ray Harroun won the first 500 in the single seater Marmon Wasp. History will be made on many fronts this season and the IZOD Indycar Series and the Speedway are doing a great job of honoring that history in the buildup to this year's 500. Perusing Twitter and motorsports blogs will tell you that the buzz has returned to the series and excitement will continue to build through the Las Vegas finale in October.

This past weekend, the Indianapolis Motor Speedway Museum held a special event as part of its Centennial Celebration with the opening of a new display of 67 of the winning cars. On Sunday, race winning drivers Rick Mears, Bobby Unser, Arie Luyendyk, Gil de Ferran and Al Unser, Jr. were at the museum and throngs of fans flocked into the exhibit area to see the cars, talk to these Indy legends and get memorabilia autographed. I saw fans with wing pieces, cardboard cutouts, books, model and diecast cars, race programs and ticket stubs at the ready. Lines were long to meet the drivers and rather than spend time standing and waiting, I took a different look at the exhibit as a whole. I did have the opportunity to talk with Gil de Ferran and offer sympathy for the Tony Kanaan deal that didn't pan out. And Al Unser, Jr. was gracious enough to talk with me about his recovery program as I passed along messages from a Twitter friend. Donald Davidson was there too and I did get him to sign my autographed copy of Tom Carnegie's Indy 500 book so I was grateful to have the chance to be there among like minded people who love INDYCARS and the Indy 50).

What struck me about the event was the evolution of the cars since 1911 and the following photo slideshow is my attempt to show that evolution by looking at the front ends of the cars. The Wasp as everyone knows was highly controversial as a single seater in the days of riding mechanics but that led to creation of the first rear view mirror on a car. The decision by the Marmon company to enter a single seater and bring Ray Harroun out of retirement for the first 500 is the cornerstone of all that defines an Indycar. One seat. A driver. Go fast. Turn left 800 times, plus one more left turn into Victory Lane. But the Wasp was a hulking beast of a race machine with a frontal area about the size of a large suitcase and the aerodynamic efficiency of a dump truck. Compare that to today's single seat Indycars, where the frontal area is minimized and wings create downforce fore and aft, and it might not appear at first glance that a Dallara has much in common with the Wasp. If you look over time at how the cars have evolved however, they have much more in common than a casual fan might notice. The cars gradually lowered their centers of gravity and smoothed out the frontal areas. Tires got wider and lower. Then wings were added in the 1970's when aviation technology began to find its way to Indy. The bridge for all those changes is found in the roadster era and the winning Lotus of Jim Clark. While I never got to see the roadsters run at Indianapolis, I have watched and photographed the evolution of winning Indycars since 1970. By this time next year, the next generation car will be a reality and promises more of the innovative and evolutionary INDYCAR technology as the current Dallara-Honda package gives way to more customizable chassis-engine combinations than at any time since the mid-1960's when roadsters, rear engined cars, four-wheel drive and the legendary turbine all battled for the Borg Warner trophy during a turbulent decade.

Meanwhile, the IZOD INDYCAR Series drivers will take on a variety of racetracks this season, likely with abandon, as the cars have no utility other than as show cars once the Las Vegas race has been run. Best wishes to all this weekend at St. Pete! It's the start of something really big.
One final note: back in my January 17, 2011 blog post, I made a list of predictions for this INDYCAR season that I repeat here as a quick reminder.