The Honda Grand Prix of St. Petersburg is barely a week away for the IZOD Indycar series teams, and with it surely will come bittersweet moments. This will be the first time for the series to return to action in anger since losing Dan Wheldon at Las Vegas last October. A street on the circuit has been renamed in Danny's honor; 2012 Indy 500 tickets are now out with his likeness honoring his 2011 500 win; this race was first won by him on 2005; and his wife and children still call St. Pete home, a place which Danny adopted and which adopted him. Bittersweet indeed.


I wish I were shooting the St. Pete race, as well as the rest of the races in the series this year. If you follow me @alleygroup on Twitter or have seen my website, you know the kind of motorsports  photo work I am capable of producing. But  until someone hires me to shoot for their team or sponsor, I have other fish to fry right now which will keep me away from racetracks for awhile. I am wrapping up my basketball officiating this weekend and will have done 79 youth games since last October, nearly equivalent to a full NBA regular season. Soccer officiating is starting up this weekend also, so that will keep me busy and help pay the bills. In addition,  the school year where I am currently teaching is 75% complete and I must finish my Marian University internship portfolio by the end of April to get my full time teaching license in May. As a result it looks like I may not be able to get back to shooting motorsports until the end of April. I have the ARCA race at Salem Speedway penciled in, then the May NASCAR weekend at Talladega and then Indy 500 practice, qualifications and the race the rest of May. Somewhere in the mix, I must find work for the summer and a full time teaching job for the 2012-2013 school year.

Whew! Lest anyone think I'm spewing sour grapes, rest assured that I consider myself blessed by the experiences I have had since deciding to make a career change in October 2009. Keeping busy has not been a problem, although making  a living has been challenging at times. Some of my best experiences have come at racetracks and I've met lots of great people in racing since I started shooting at Indy in 1984. My last Indycar race was at Kentucky last fall, two weeks before  the fateful Las Vegas finale, and ironically that may have been the last Indycar race at Kentucky - ever. That would be a shame, but this year's schedule of 16 events should still provide the  open wheel thrills and stiff competition for which Indycar is renowned. 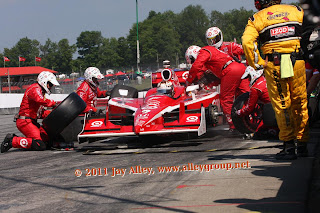 Lots of people I know in Indycar will be at St. Pete next weekend, many of whom were at Las Vegas last October. Anyone involved in the series knows how hard things have been through the winter, so it will be great for  everyone to get back to racing. And new promise lies in the DW12 Dallara machine, powered now by a choice of Honda, Chevy or Lotus. Cars named in honor of Danny will be screaming through St. Pete in the acid test of the new specification next week. Indycar has new technical people involved like Beaux Barfield to support Randy Bernard's vision for the future.

Teams and drivers have been shuffled too since last year, but  I'll bet the Penske and Ganassi teams are still going to  lead the way.  Two notable moves involve the Mayor of Hinchtown, James Hinchcliffe, who now has the seat at Andretti Autosport which DW had been hired to fill before Vegas.  And the most experienced driver in Formula One history, Rubens Barrichello, is coming to KV Racing as Tony Kanaan's teammate. Those two changes alone should really spice up the on track competition.  Hinch was my  2011 Rookie of the Year pick back in January before the season started and he delivered despite missing one early season race. Not this year. I think he will challenge for the season title and be the man to bring the Andretti team back to the forefront of the series. Add former Champ Car stalwart Katherine Legge, Ed Carpenter as a team owner/driver (now with a win under his belt),  Firestone Indy Lights champ Josef Newgarden and a host of others to the mix and who knows what might happen.

In January last year, I wrote here that Dario would win the season title, Hinch would be the top rookie, and Ed Carpenter would win an oval race. I don't have  a crystal ball but I have fun with these predictions every year,  and enjoy revisiting them periodically to see how I did. For 2012, the new equipment formula is the true wildcard, as the team which tests and advances the most, and has engine reliability, is likely to be the series champ. This year I think that means Ganassi and Scott Dixon, on the last weekend of the year, over Hinchtown and Dario. Helio wins Indy again to join the legends at the 500 but it's his only win. Takuma Sato and Rubens Barrichello get surprise wins in 2012, but those will come late in the season once their teams come to grips with their new gear. And once Simona or Katherine win a race this year, everyone will quickly forget the young lady who jumped to racing stock cars after the IZOD Indycar Series made her a household name. Take that one to the bank. I hope to see you soon at a racetrack near you!
Posted by Jay Alley at 3:33 PM