Youth was served once again at Salem Speedway (Salem, Indiana) as the field was full of up and coming young drivers and one of them somehow managed to hold off hard charging ARCA and Salem legend Frank Kimmel to win the Kentuckiana Ford Dealers 200 today. The race included the youngest driver ever in ARCA, 15 year old Erik Jones who wound up 5th ahead of 16 year old Clint King on a perfect day for short track stock car racing. Salem is known for its bumpy high banked surface and fellow young gun Chris Buescher looked strong from the pole early in the race, but it was Bowman who showed experience well beyond his years dealing with traffic as Kimmel was breathing down his neck over the last 50 laps. Another youngster, Chase Elliott, son of NASCAR legend Bill Elliott, mixed it up all day and finished in fourth after experiencing the banging and bumping at Salem for the first time. 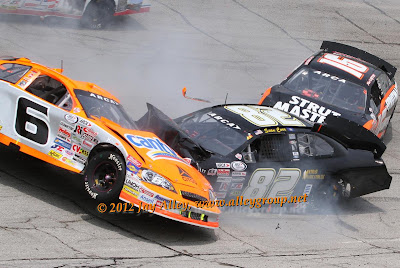 It was a mixed up day full of close calls and hard charging, but the person who had the toughest day was former Indycar driver Milka Duno, who took a hard hit on the driver's side early in the race and was lucky not to be injured in a three car tango in Turn 1. With so many newcomers in the field, it was literally a day where you couldn't tell who was who without a scorecard, as the field of 34 cars had close to 20 drivers who had never run at Salem before. Not surprisingly, there were incidents but no more than seems customary for this fast short track as the top 24 starting cars were within one second of the pole time. This was a quick trip from Indy for me and next weekend I go to Talladega, although I will not be able to get down there in time for Friday's ARCA race. But such is the diversity of this great training ground series, which runs on dirt miles, short tracks like Salem & Winchester, a road course and the big tracks of Talladega and Daytona. Anyone who is a fan of stock car racing must go see an ARCA show as the racing is usually quite spirited and the older NASCAR style equipment is plentiful, so there's always excitement with close quarters action. And you get the chance to see tomorrow's stars today before most anyone knows who they are. Get a pit pass and an autograph while you can still get near these drivers folks. You won't regret it! Here's more pix from today's 200 lap event at The Salem Speedway: