My 2013 racing photography season encompassed 22 races over 10 event weekends. I drove roughly 5500 miles to get to and from the racetracks. It started at the beginning of April and ended in late October. I shot for Associated Press, ARCA, motorsport.com and Salem Speedway. Untold thousands of images rang up on my Canon 7D and 40D. Best of all, I get to start all over again in less than four weeks when I go to Daytona to shoot the Rolex 24 Hours. Here are my top five memories of my 2013 season.
#1. While the images I shot were not all winners, my favorite moment of the entire season was getting to shoot Victory Lane at the Indianapolis 500. I've been in a lot of Victory Lanes over the years but never at the Indy 500. It was the most chaotic victory celebration I've ever shot as team owner Jimmy Vasser effectively blocked most shooters from getting Tony Kanaan's initial milk celebration and photographers were very upset. But I just happened to have the right angle to get Tony's face through Vasser's outstretched arms in the photo above and I kept shooting while others around me were yelling for Vasser to get out of the way. It was a crazy happy situation and I was glad to have had the opportunity to shoot for motorsport.com.
#2. My next most favorite moment of the year came at Talladega in October. The fall NASCAR weekend was quite a contrast to the one in the spring, as the weather was much more favorable and the races went off on time both days. I was shooting for Associated Press and had a bird's eye view of the entire 2.66 mile racetrack from atop the tallest grandstand on the tri-oval. I was trying to be patient and just waiting for action during both the Trucks and Sprint Cup races and was rewarded with last lap mayhem as airborne racers filled my lens in both events. At the time, I remember thinking I hadn't shot so many flipping racecars since the last sprint car race I did a couple of years ago. I certainly never saw anything like that weekend's madness on a paved track, let alone during a NASCAR weekend. The best news was that no one was hurt and I got spectacular images that AP was able to use.
#3. Coming in as my third most favorite memory was Father's Day weekend in June at Michigan International Speedway when I was the principal photographer for the ARCA series. Although I had been a support photographer for ARCA several times previously, this was the first event where I was responsible for their entire event coverage. I had to be sure I got everything from driver headshots to the hauler layout to Victory Lane celebrations and everything in between. There was not a lot of downtime during the two days ARCA competitors had the track and I loved the pressure of having to deliver timely coverage for the ARCA website and various team public relations reps. On the way back to my mom's in Ohio afterward, I got pulled over in some small town but only got a warning from the nice officer as I simply told him I had just wrapped up two very long days shooting at Michigan and was hurrying to get to Akron and unwind. He must have seen the roadtrip fast food debris and race promotional materials on my passenger seat, and once he checked my driving record, he was quite gracious and let me go on my way. It was a perfect ending to a great weekend. 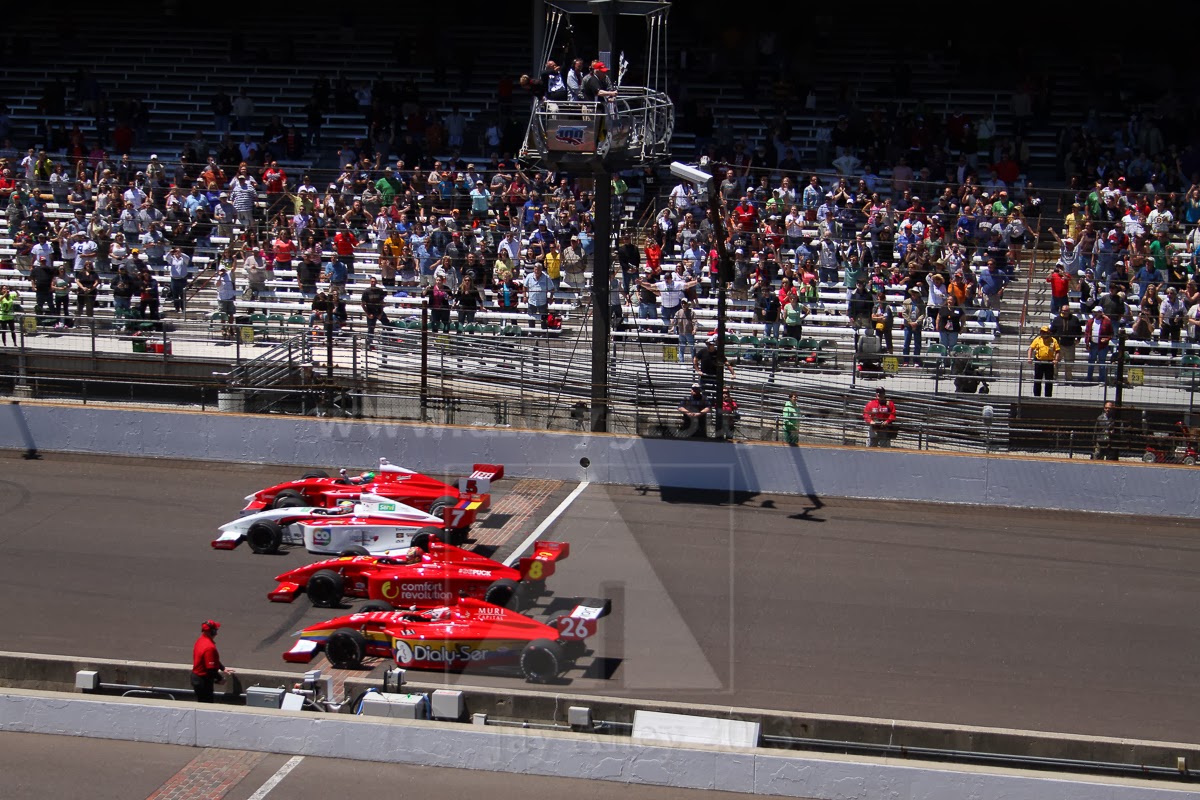 #4. The most exciting finish of any race I worked in 2013 was perhaps the best Indy Lights race in history. Getting a vantage point on the lower roof in front of the Pagoda at the Indianapolis Motor Speedway a few laps from the finish, I was prepared for a last lap slingshot move for the win, but getting a four-wide photo finish never entered my mind as a possibility. I recall ratcheting the ISO up on my main camera body so I could shoot at 1/4000th of a second. The last couple of laps, I set the photo up with the flagstand as the main focal point and took a few practice shots as cars came past the yard of bricks. I am sure glad I did as the race to the checkered flag was dramatic, my framing was good and the images I got for motorsport.com were on the money. No one had ever seen anything like that at Indianapolis and it was quite a thrill for me to be able to capture that moment for the ages at my favorite racetrack.
#5. I had a hard time coming up with this one as there were so many moments which could have made my Top 5 for 2013. But I gave the nod to Charlie Kimball's win at Mid Ohio, his first in an Indycar, as much for the fact that Charlie raced the wheels off his Dallara as for events which subsequently effected teammate Dario Franchitti. While most of the field adopted a fuel saving strategy, Charlie went balls to the wall the whole race and was a deserving race winner. No one could have known at the time that this event might be one of the last times that Dario would earn a podium placing in an Indycar, but barely two months later, injuries suffered in his horrific Houston accident forced him to announce his retirement. A sidebar to this weekend for me was meeting friends from Indy at Mid Ohio and hanging out with them in between traipsing all over the Mid Ohio grounds shooting or uploading for motorsport.com over the three day race weekend.

I could go on and on with memories from my road trip racing life in 2013, but I will leave you with this: more pictures gleaned from all the races I shot in a "best of" slideshow for the whole year. This is probably my last blog post for 2013 but I'll be back again soon to bring you my view from the road - one photographer's journey. Until next time, Welcome to Indiana-ville! Please come back soon.