Everyone knows about the ice bucket challenge. My photographer friends know about the five day Black and White photo challenge. A couple of weeks ago, I decided I needed a personal creative challenge that would drive my Twitter posts @alleygroup. Since the last race I shot was in mid-September, I wanted my challenge to involve motorsports and have some staying power so I would have to be disciplined to stick with it consistently.

As luck would have it, I decided to start my daily challenge with 42 days left in 2014. That number is meaningful for me for a lot of reasons, but especially since it was the number I wore playing basketball for four years at the University of Chicago and two years at Indianapolis Shortridge high school. I thought staying on task for 42 days would be a tough challenge for me and I knew I needed something to tie it all together. I decided to frame my challenge with weekly sub-themes under these general topics: Fire, Water, Air, Earth, Sorrow and Joy. As I write this, I have almost finished the first two weeks involving photos with Fire and Water. I've realized during the editing process that, as rocker Rod Stewart once sang, every picture tells a story, so this post is the story behind each "Fire" picture I've posted during Week 1 of my personal challenge. My next post will include the stories behind the photos with the "Water" theme.

I don't normally shoot the straight line crowd but I had the chance to shoot the US Nationals at Lucas Oil Raceway (then known as Indianapolis Raceway Park) in 2007 for American Motor Journal (AMJ) and I couldn't resist. I shot the drags for four days and this photo of Bob Bode blowing up at the finish line is one of my favorites as the car is engulfed in flames. I was shooting from the backside of the suites by the IRP oval overlooking the top end of the drag strip when Bode rolled through. This was back when they were still racing the quarter-mile. 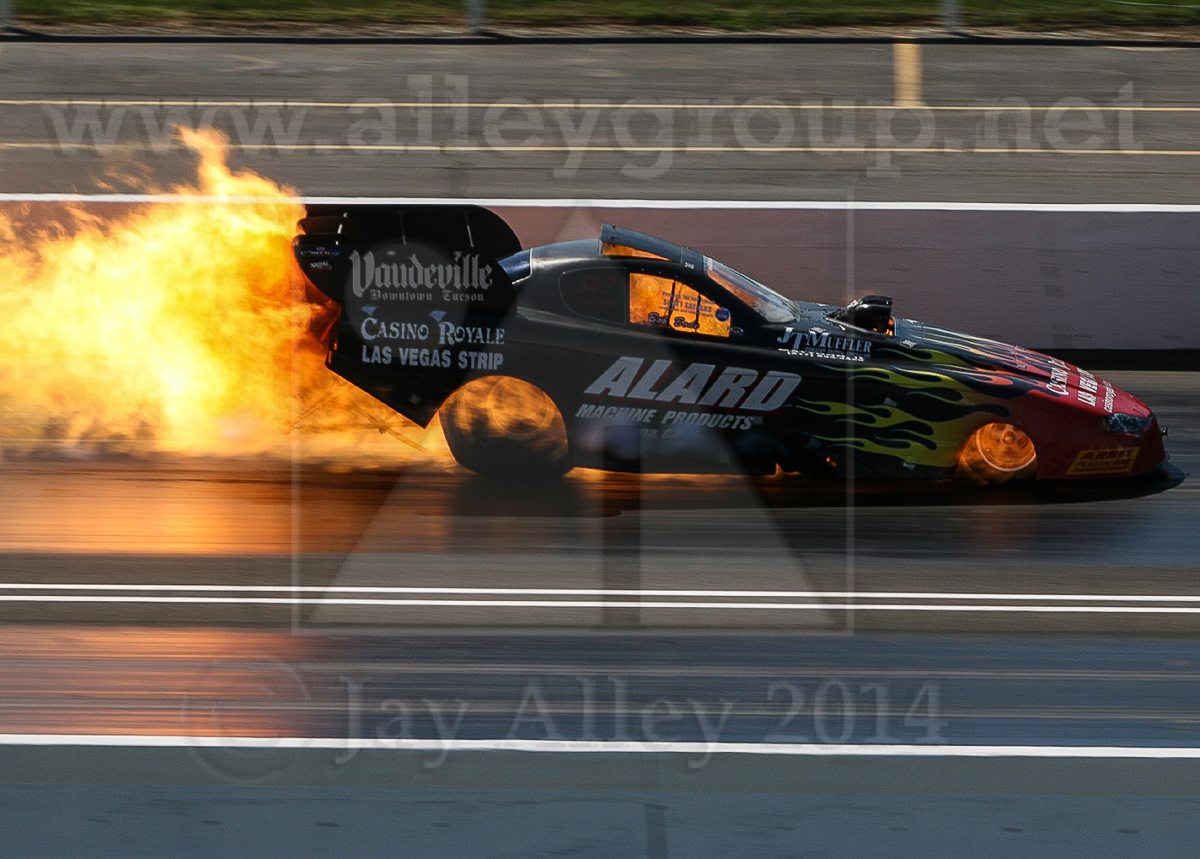 I was shooting a lot of races for AMJ from 2006 through 2012, and another event at IRP in 2007 yielded this photo of a competitor in the USA Modified series who had hit the Turn 1 wall on the IRP oval and left a trail of fire behind. This race was not well attended and there were only a handful of photographers there that evening, but I didn't care as I was at a racetrack I know quite well and happy to be shooting racing of any kind. 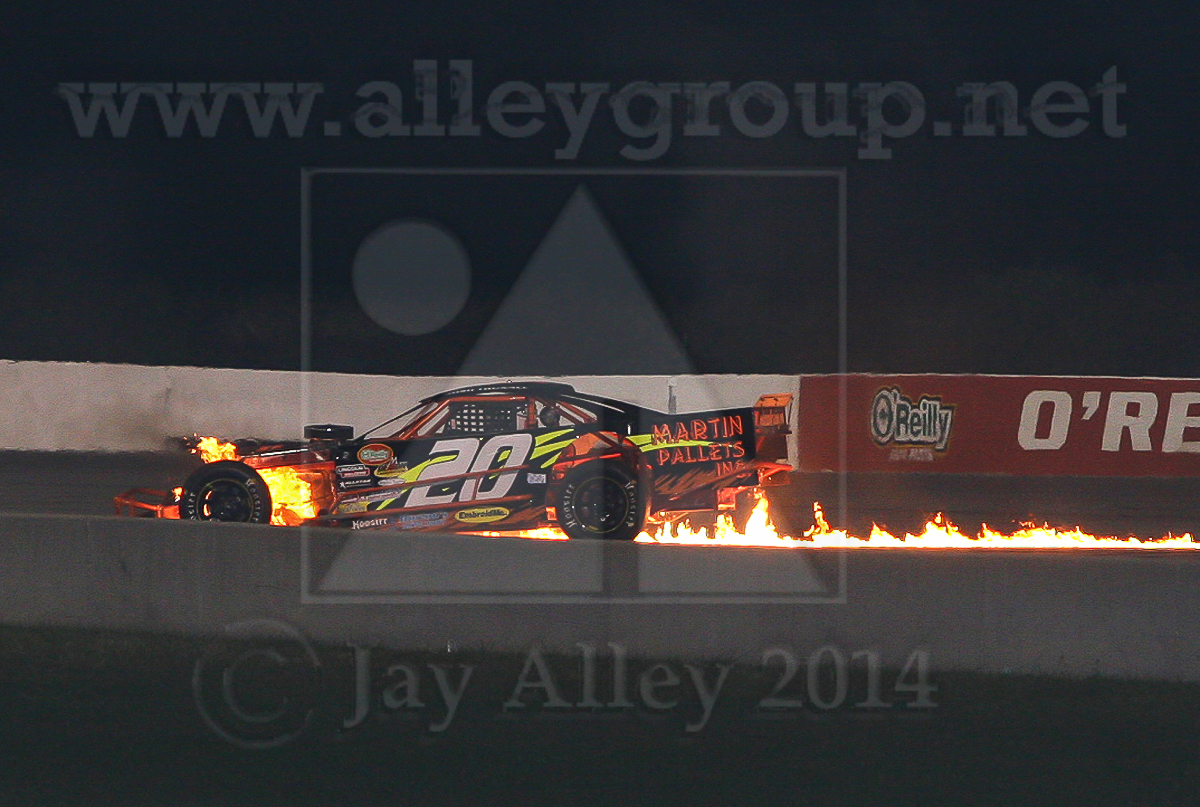 In 2008, I was shooting for AMJ and it was bump day at the Indianapolis Motor Speedway for the Indy 500. It had been a busy month of May as I was the only shooter for AMJ and had been trying to cover the event from all angles. The last day of qualifying, I decided to shoot from Turn 3 and just wait and see if anything happened. Sure enough, late in the day, AJ Foyt IV provided some excitement. Shooting in Turn 3 often involves accidents and the view around the turn is limited no matter what position you take. As AJ IV popped out from behind the infield fencing, I noticed he was already going backwards and it looked like he was on fire. The sequence I shot was spot on and the fireball from the fueling port (which had somehow been left unsecured by a Foyt crewman) was spectacular albeit brief. Later I heard that heads rolled in the Foyt team as legend AJ was not a happy camper. 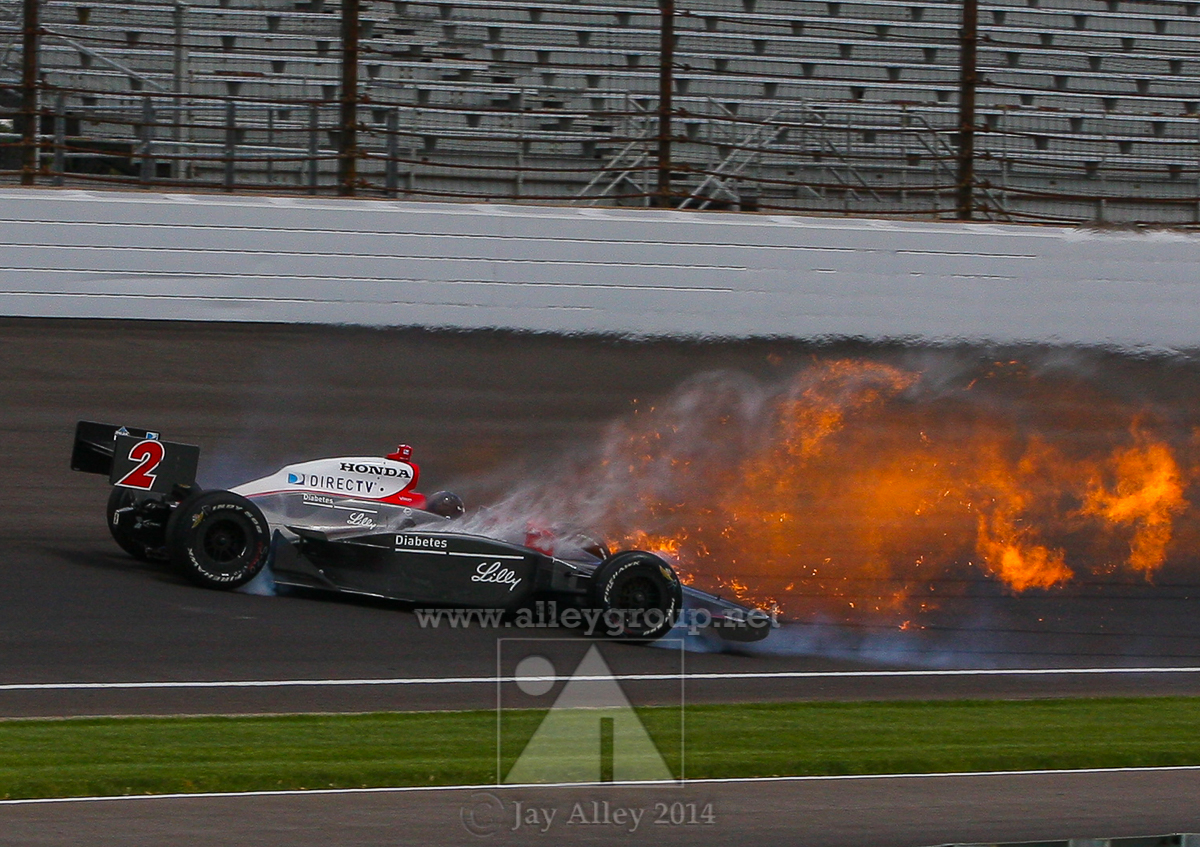 One of my goals the last few years has been to shoot more dirt track races but I haven't been able to do as many as I would like. In July 2009, I went to Kokomo Speedway for the USAC sprint car show and was supposed to have credentials through AMJ but apparently the request never was submitted. This was one of those times where looking like a photographer paid off, as I had my photo vest, two cameras, my flash and battery pack on me ready to shoot. I had also brought a copy of the latest edition of AMJ with me so I could prove I was shooting for them. I got the credential I needed to shoot in the infield and Casey Riggs was the subject as his engine let go in a big way during hot laps. 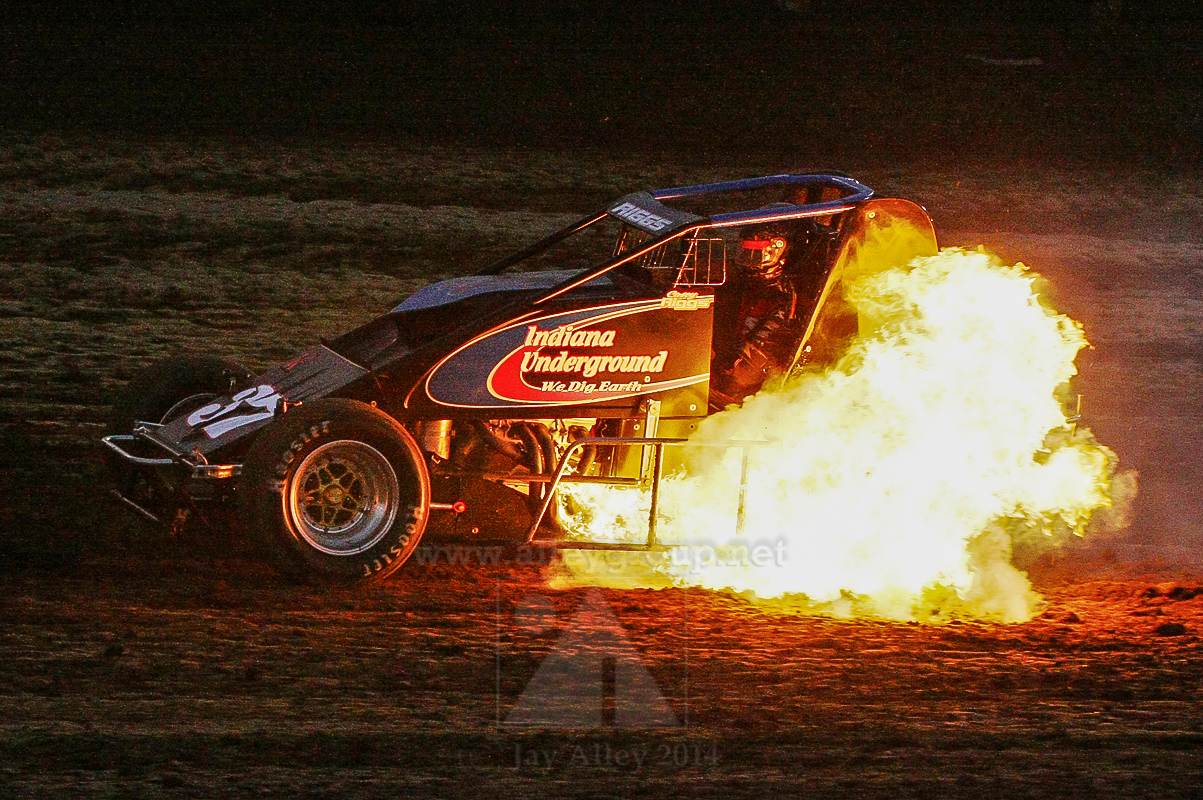 Although this photo from the US Nationals in 2007 did not involve a fireball, I loved the flames being thrown from the headers of Del Worsham's funny car during night qualifying. The experience shooting the drags was unforgettable as I was able to shoot right at the wall near the starting tree for this photo and remember having to brace myself against the heat and shock waves during the Top Fuel and Funny Car races. Looking through my 70-200, the air seemed to liquefy from the heat as these nitro fueled beasts roared past. I haven't been able to get back the drags to shoot since then but I would do it in a heartbeat if I had the opportunity. I think my ears are still ringing, despite the earplugs and gun muffs I was wearing that weekend. 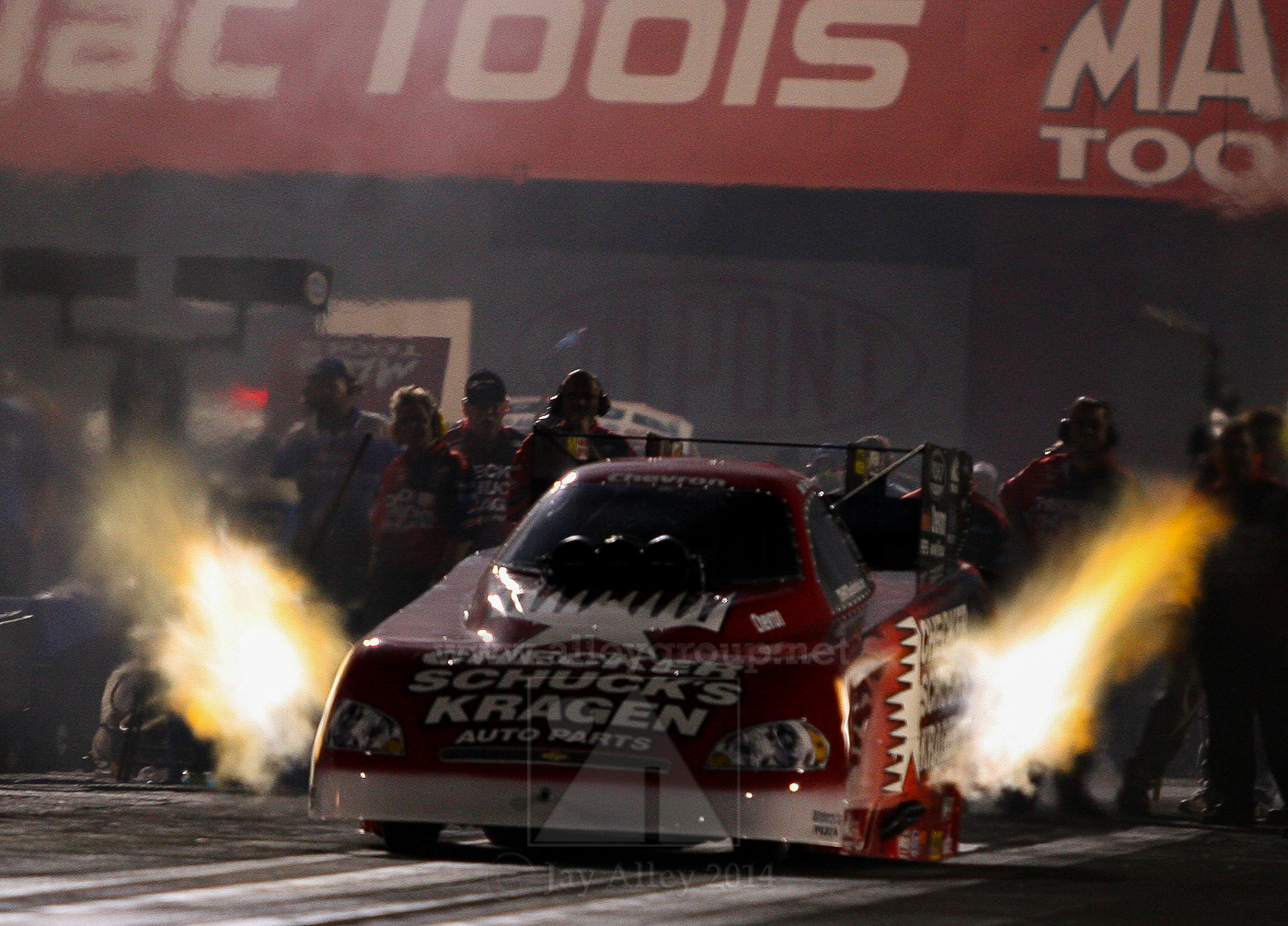 I've shot all kinds of racing since 1984, and it is still a surprise to see fire. That was especially true in 2000 during practice for the Brickyard 400 as Chad Little blew up in spectacular fashion coming through Turn 3. I was shooting for Agence France Presse (AFP) that year and was assigned to work Turn 3 for the weekend. I remember seeing Little spewing flames and wondering when he would spin as I shot a sequence, but he never did. I also remember wondering why the yellow light was taking so long to be shown as surely Little had oiled down the groove in the turn. Sure enough, a few seconds later, Jeremy Mayfield roared into 3 at full song and did a half-spin into the wall in front of me. I got pictures of Mayfield's incident as well, and several of my photos were used in Winston Cup Scene and Winston Cup Illustrated publications. To make that happen, I had to get prints made and meet their photo editor the morning after the Brickyard at their hotel before they left town. It was well worth the effort!

The last photo of my fire themed week comes from Winchester Speedway and the ARCA Series race in June 2011. Jared Marks had rolled to a stop along the Turn 1 wall after contact. I was shooting for AMJ again and had moved into the pit area where you actually shoot up the banking since the pits at that end of the track are even with the bottom of the race track. I noticed smoke billowing from his exhaust pipes and then several large plumes of fire erupted as he tried to shut the car down and clear the exhaust of accumulated fuel. I like this image because Marks already had the window net down and was ready to climb out, and I only got a few frames where there was actually fire and not just black smoke. Timing is indeed everything. 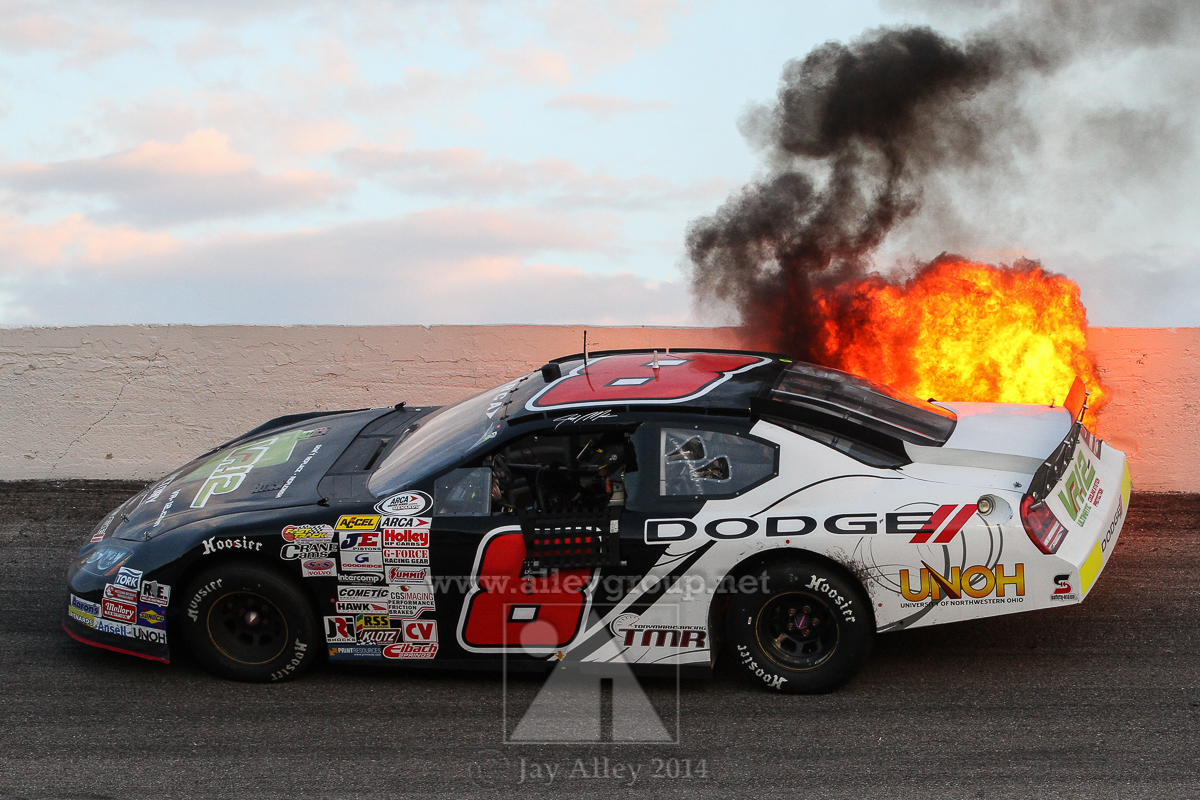 Up next:  Week 2 and the water theme. Water, water everywhere but nowhere a drop to drink.
Posted by Jay Alley at 12:04 PM